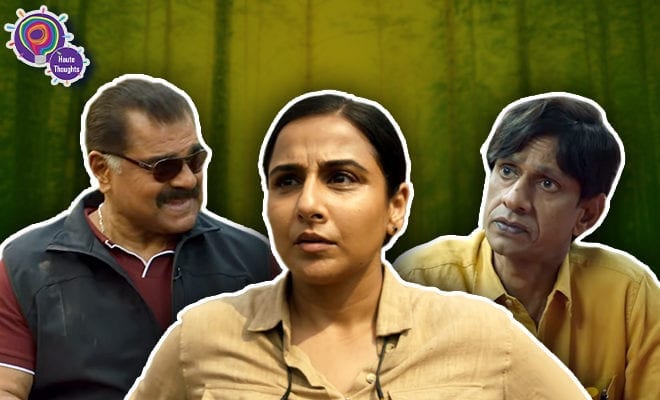 5 Thoughts We Had While Watching ‘Sherni’ Trailer: Vidya Balan Roars Per Usual But Why Is Everything Else So Vague?

Some actors and filmmakers are considered a sure thing. When you find out that their film or series is releasing, you know to set that bar of expectations at a certain high, because they’ve never disappointed you. For me, Vidya Balan falls in that category of performers. I’ve always enjoyed her movies, and what she brings to her characters to elevate them to a whole new level. So naturally, the trailer of Sherni bring dropped by Amazon Prime Video India had me eager to see what VB is serving up next, after her stint as the human computer, Shakuntala Devi in the eponymous biopic. Another strong female character that will have a lot to unpack? Maybe! What makes Sherni even more intriguing is that it is directed by Newton filmmaker Amit V. Masurkar.

According to the official synopsis, “Sherni will see Vidya Balan in the lead, as an upright forest officer, who powers through the brutal beasts of social barriers set by the patriarchal society and the lackadaisical attitudes within her department. Her journey is set in a world full of quirky yet relatable characters, as she navigates through her marriage with her rather unusual job, all this while trying to resolve the man-animal conflict.”

In the trailer, we see that a tigress has gone rogue and seems to be attacking villagers, who have sought the help of the forest department to bring her under control. When a woman gets appointed to the task, many people are not exactly happy because of the usual sexist belief that in such a dire situation, a woman is too weak a leader. But workplace sexism, where she often gets mansplained or put down by her male superiors and other men, is just one of many problems Vidya Balan’s character must tackle. Outside the jungle, there are issues in her home, where she struggles to be herself before her husband and her mother-in-law.

I like the premise. It’s layered and has a lot of scope for Masurkar, and writer Aastha Tiku, to pull off a satirical commentary on multiple social issues, primarily that of workplace sexism and the relationship between humans and nature. However, the trailer doesn’t exactly seem convey that punch, you know?

Here are 5 thoughts I had about the Sherni trailer:

How does she do it, every single time? Vidya Balan puts a promising foot forward. In fact, her stance in the film is also pretty much like a Sherni. A jungle cat that lands soft on her feet, rarely loses her balance and will only ever hurt you if you hurt her. She isn’t a woman who likes talking a lot, from what I’ve seen in the trailer, and chooses her words very carefully. I look forward to getting to know her character and its journey.

Also Read: Kangana Ranaut Regrets Not Doing The Dirty Picture, But Says She Couldn’t Have Done It Better Than Vidya Balan. We Agree!

Newton, starring Rajkummar Rao and Pankaj Tripathi, was India’s official entry at the Oscars in 2018. Naturally, all eyes are now on Amit V. Masurkar, with extensive hopes pinned on Sherni to recreate some of that magic. And Sherni seems to have plenty of scope for what Masurkar brings out best—there can be clever satire, some masterful performances from these incredible actors that are playing some rather quirky roles. I cannot wait to see  it!

3. Is Sherni loosely based on the 2018 killing of the Tigress Avni is Maharashtra’s Yavatmal?

There’s no way you watched the Sherni trailer and it didn’t take you back to 2018, when India took some break from celebrity gossip and turned its focus on Tigress Avni, who reportedly had killed some 13 people in Yavatmal, Maharashtra, and was ordered to be executed. The search for the tIgress, if memory serves me, also involved forest officials seeking help from a special hunter, and a chase that took days to conclude. So far, there has been no confirmation if this real incident indeed is the inspiration for Sherni. But I guess, we shall see.

4. They’ve pulled out the big guns with that talented cast though!

This cast is *chef’s kiss*. There’s Sharad Saxena, who has epic comic timing, playing a very self-assured hunter. In fact, you can catch a glimpse of his banter with Vidya Balan’s character in two scenes during the trailer. There’s also Neeraj Kabi, who seems to be playing Vidya’s superior in the film, maybe channelling his Parulkar bravado in this one too. There’s also Brijendra Kalra, Ila Arun, Mukul Chaddha, and the always incredible Vijay Raaz, who looks like he might offer some much needed help to Vidya Balan in this case. Or maybe not?

This is quite a cast assembled, and headlined by Vidya Balan, and I am excited to see what they bring to this film.

5. The story is intriguing as hell, but why is everything in the trailer so vague?

Okay, so I hinted at this but have avoided talking about it until now because there’s plenty of good things about the movie that I wanted to get out first. But now that we are here… did the trailer seem a tad vague to you?

Usually, trailers have this fixed rhythm they follow: start off with a basic setting, then introduce a problem, then show the characters struggle to fight that problem, all of this crescendos to this one shocker moment that is like the climax of the trailer, and then comes this final montage that’s supposed to finish us off and get us real interested in watching the movie.

And here is where Sherni is all bark but no bite. It’s vague because I only fully understand one stake—the tigress—in the film. I don’t understand why at one point, Vidya Balan is crying, or what’s happening between her husband and her. I know the details now, having read the official summary and all that. But just from the trailer, it’s a little all over the place and not getting me pumped up for the story.

Still, I am all on board for this hunt, because it’s got some star players signed on for it!

Exclusive: Indian Couple Talks About Their 120-Day Adventure Trip With Their Pet Dogs, Living Life Off The Leash!