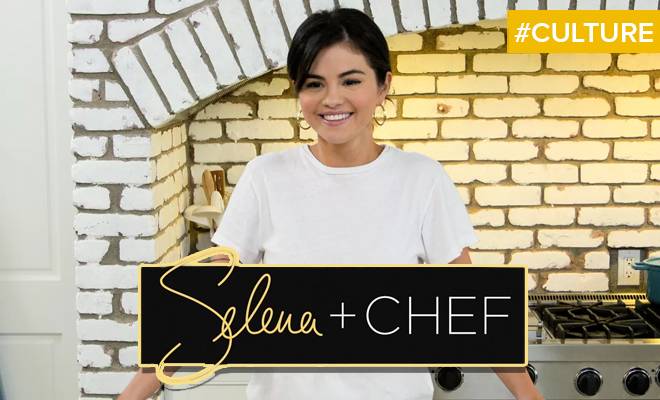 To say that cooking has become one of the most pursued activities during this Coronavirus-induced quarantine is an understatement. Open your Instagram feed and every second person would be posting pictures of their kitchen antics, whether it is the once-upon-a-time trending Dalgona coffee, cakes for loved ones’ birthdays or their very first round roti. The obsession isn’t limited to us plebs alone; even celebrities like Sameera Reddy have whipped up their own mini cooking shows on social media. But trust Selena Gomez to go big and go home with a whole ten-episode quarantine cooking show on HBO Max, Selena + Chef, the trailer for which is fresh outta the oven!

The 28-year-old ‘Wolves’ singer may be the queen of a million hearts because of her music, but a professional in the kitchen? She’d say, ‘It Ain’t Me’! And looking at her culinary skills in full display in the Selena + Chef trailer, we won’t disagree. The series is basically Selena Gomez, kitchen novice, being paired with a lineup of celebrity chefs who instruct her how to cook a dish. Sounds easy, no? But remember, this is quarantine cooking, which means this is all happening virtually. The chefs are in their kitchens and Selena is in hers, with no physical help, just instructions over a video call. Sounds fun, eh?

Trust me, it looks fun too. The trailer is basically a montage of some delicious AF-looking dishes, from tacos to French Omelettes to Matcha Chocolate Chip Cookies I’d definitely wanna dig into, and Selena making some minor, some major boo-boos as she tries to follow the instructions from the chefs! It also gets super awkward to watch at one point when Selena’s trying to cut up an octopus and goes all, “Ew!” Or when one of her friends tells her the dish she so painstakingly prepared is undercooked! But hey, Selena looks makes even clumsy looks adorable and we’ll give her points for trying!

Yep, if there’s food, there are going to be testers too. In this case, they are Selena Gomez’ friends and family members who’ll be the lucky (or unlucky, depending on how good/bad a cook she is) ones who get to sample her cooking. You can watch the trailer here:

Unfortunately for us, her Indian fans, the show premieres on August 13 on HBO Max, which isn’t really available to us. Which means we’re going to have to wait a while before the show gets picked up on one of the local OTT platforms. But I’m totally going to keep an eye out for episode trailers and snippets on the singer/actor/producer’s Instagram, which she has promised she’ll be posting more on.

In one of her recent Instagram posts, the singer shared a video addressing her fans and telling her fans the reason she wasn’t posting a lot on social media. Gomez revealed that she has a bunch of exciting things coming up but she felt it a little insensitive to talk about them earlier because of the way the pandemic was affecting everyone.

In the days after this message, Selena Gomez has finally announced the launch date for her highly anticipated beauty brand, Rare Beauty, which will drop on September 3.

And then, there’s this show. Looks like Selena will be serving up a lot of interesting new things for her fans. And knowing us, we’ll be lapping it all up!