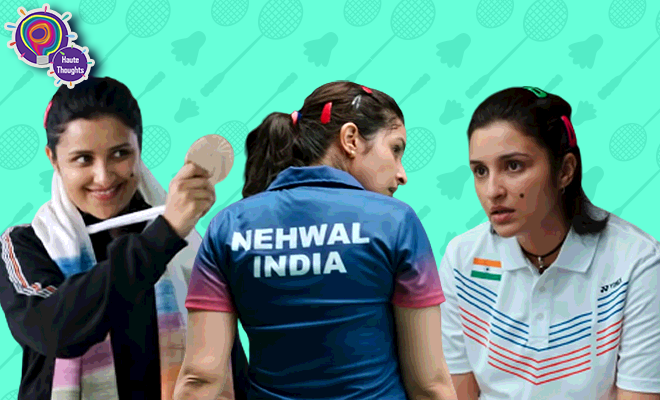 One Thought We Had About The Saina Trailer: If We Could Look Past The Mole, We’d Have More Thoughts

It obviously took badminton ace Saina Nehwal many years of hard work and several match wins to finally reach a stage where she could court controversy. But the biopic on her, directed by Amol Gupte and starring Parineeti Chopra, began doing it quite early in its career. First it was the poster, which featured a tennis serve in a film about badminton, with Twitter inevitably serving memes about it. Though, I’ll admit, I like the title in the form of a shuttlecock. And now, as the Saina trailer has dropped, on the occasion of International Women’s Day, there’s another bee in our bonnet—what’s with that mole, yaar?

Usually, I have a lot of thoughts about a trailer, which I condense down to five. However, when the Saina trailer dropped, and I excitedly sat to watch it, I couldn’t look beyond the mole on Pari’s cheek. Now before you call me out on accusations of bringing a woman down because of her looks and what not, let me clarify, I understand why the mole is there. I know that Saina Nehwal, the real Saina, has one too in the exact same spot. But did it have to be that prominent?

No wait, scratch that, did we really need it at all? Parineeti Chopra, with her face all scrunched up in concentration fused with determination, looks plenty like Saina Nehwal without needing any assistance from that mole! And if they wanted to keep it on for authenticity’s sake, could it not have ben consistent in size?

The trailer also introduces Manav Kaul, who plays Saina Nehwal’s coach Pullela Gopichand, along with Meghana Malik, Ankur Vikal, and Shubhrajyoti Barat. The performances look like they might pack a punch, but thanks to Bollywood’s need to showcase the entire film in its trailers, I don’t see anything exceptional happening here. If at all, I am concerned about Parineeti’s accent and dialogue delivery, which sounds off. I am not too sure either about the overly emotional angle that the film looks like it is taking. We get it, sports films thrive on this drama. But can we, for once, not have a sports movie that keeps emotions realistic and not amplified for the big screen? Look at Panga.

After a COVID delay that pushed its release date from the initial September 2020 to March 2021, Saina is all set to release in theatres on March 26, 2021. And I sincerely hope to be proven wrong, and for the film to continue the streak of remarkable stories about women.