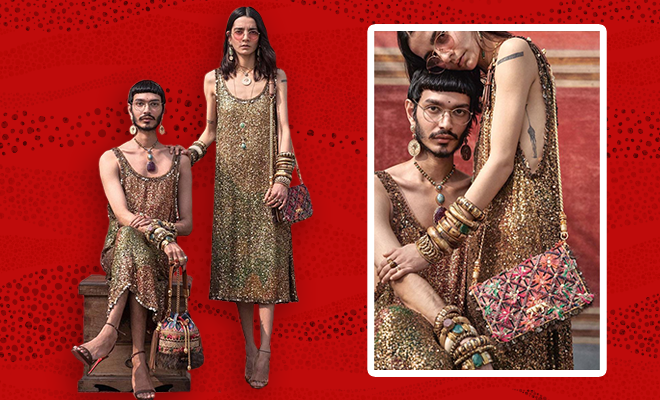 India is not ready. There are a lot of things that India and its people aren’t ready to accept, adapt to and comprehend even in 2021. From the silliest things like an ad about Hindu-Muslim harmony or a harmless stand-up about a historical figure to bigger things like treating women as humans and not objects, India is certainly not ready. Of these plethora of things, one is that we find extremely hard to accept (forget appreciate) gender fluidity. We have been conditioned to believe that men and women have predefined gender roles to play in society and we should stick to them at all costs, or else! Androgynous or gender-fluid clothing is thus an alien (often offensive) concept to a lot of people and the latest campaign for the Sabyasachi X Bergdorf Goodman collection getting hate for a man donning a dress is proof of that.

The fashion photoshoot for the exclusive collection of the collaboration features a male model in a knee-length dress, jewellery, heels and a bindi. This image was disturbing for some people who probably support toxic masculinity and couldn’t stand the idea of a man in an attire specifically deemed for women by the society. The comment section was full of negative comments, trolls and hate for the ace designer, Sabyasachi, with people slamming him for coming up with such a “pathetic” and “stupid” concept.

A user commented, “What exactly are you trying to put across by making a guy dress like a girl? I am sorry but the message is not clear.. and what is wrong with a guy dressing up like a guy? How does it hamper freedom and equality?? Pleasee enlighten my soul…”. Another wrote, “This is plain downright stupid. Gender bending beyond a point is an insult to human sensibility. STOP.” This makes me believe how we desperately need more such campaigns that aim to normalise gender inclusive fashion.

Well, Sabyasachi has a knack for making fashion and his campaigns more inclusive, be it by casting dusky or plus-size models as his muse or by dressing his male models in a dress to promote gender inclusivity this time. Even if it means offending people. However, thankfully, there were some encouraging and positive comments too, that restored our faith. A user wrote in support, “Loving that @sabyasachiofficial is also depicting fashion for the gender fluid and non-conformists. He is a fashion designer. He has to not just cater to stereotypes. He has enough and more clothing and photoshoots dedicated to both genders anyway. Love the fact that this caters to a lot of people beyond the idea of what a man should wear.”

Another user commented, “I love this picture! It shows today’s world 2021! To all people saying he’s wearing heels, dress if this makes him comfortable that’s his choice, good for him, but I think its fashion, its bold and creativity! Beautiful hes the lucky one modelling for one the biggest Indian designer in the world! Wish I was in this picture it would be an honour! [sic]”

We seriously don’t see what’s wrong with a man putting on a dress? There was a time (in the 1800s and early 1900s) when pants weren’t meant for women but now you see women nailing pantsuits and trousers in all glory. However, men cross-dressing and wearing skirts and dresses is highly unacceptable still, regardless of their sexuality and gender. There are some celebrities like Harry Styles and Ranveer Singh who despite being ridiculed for it are breaking this fashion stereotype of dressing ‘like a man’. *Rolls eyes* In a country where a large population worships lord Shiva and his androgynous form Ardhanarishvara, how difficult is it to accept the concept of gender fluidity and genderless fashion? Will this ever be normalised? When will we be ready? Maybe we should have more gender-fluid collections, campaigns and discussions until we truly are.

Also Read: Karan Johar Breaks Gender Stereotypes In The Most Fashionable Way Possible And We Love it!