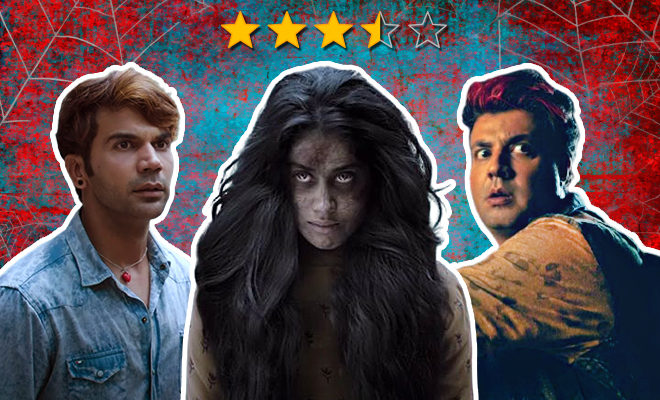 The first A-lister Bollywood film released in the theatres since the pandemic, Roohi’s shoulders are weighed down by the unfair expectations people have from it. To top all of that, sharing the same genre of horror-comedy, a lead actor and a producer with a much-loved Stree, impressing the audiences won’t be easy. I went in with no comparisons in mind, but simply with the hopes of a few laughs and it didn’t fail to deliver.

Directed by Hardik Mehta and written by Mrighdeep Singh Lamba and Gautam Mehra, Roohi spans across towns and villages that are fictional but the deeply-rooted misogyny that thrives in those places isn’t. The film revolves around Roohi (Jahnvi Kapoor), a docile girl, Afza, the mudiya pairi (one with twisted ankles!) who possesses Roohi, Bhawra (Rajkummar Rao) and Kattani (Varun Sharma) who help bride-dealer Shakeel (Manav Vij).

We write day in and day out about misogyny, patriarchy, consent and a lack of equality in our country. As an audience, watching it all play on the big screen made me feel nauseated. That made it difficult for me to root for Bhawra or Kattani because come on, they were not exactly husband material. None of them were. But as the film progresses, you realise that Roohi is rather a satirical take on the misogyny that plagues our culture. It explores how women’s rights seem more fictional than a chudail that’s eerily similar to Jab We Met’s Geet who says things like, “Bachpan se hi naa … mujhe shaadi karne ka bahut craze hai, by god.”

Superficially, Roohi feels like a horror-comedy laden with sexism and well-written one-liners, but if you are even remotely woke, it will put your though process into ignition. That’s what a good piece of literature is supposed to do. The film places the onus on the audience – what will you take from it? Can you identify the underlying themes that exhibit a not white-washed image of our culture? Or are you too deafened by the wailings and screeching of a chudail who just wants to marry?

The film opens with Tim, a documentary maker, interacting with Bhawra and Varun who then go on to proudly show him a real-time bride kidnapping. What is that? Any man can pick a girl he wants to marry, go to the agency operated by Shakeel, and they will abduct the woman and bring her to the venue. You know, just like WeFast but for women. Bhawra and Varun are proud employees of the company and they show Tim how it’s done. Tim’s sheer shock at the cultural practice, the locals treating this piratical tradition like a remarkable one, the social conditioning that makes women accept it as just how things are done – all of these things reveal a deeper rot in our culture, that of bride kidnapping and buying.

Helmed by the men, and supported by women, the commercialisation of brides in this village is both a display of misogyny and internalised misogyny. Tim’s reactions on the absurd on goings of the practice holds great significance in demonstrating that it’s not okay. But as the locals say for them law is not bigger than traditions. And hence, such practices still exist.

That’s how they meet Roohi too, who is supposed to be their next catch! The manhandling, the woman’s suffering and helplessness are supposed to evoke feelings in you. However, the genre of horror-comedy makes sure it’s done in a satirical way.

India’s culture has a long history of violation of consent and women’s autonomy. While this film explores cultural practices pertaining to marriages, it also shows how women’s consent is not a concept that even pops in the minds of people. Men and women see marriage as an institution meant to benefit the men while we are barely given a choice. Whether it’s about the many brides they kidnapped or Roohi, who they manhandle, push around and don’t bother whether she wants any romantic affiliation with any of them – Bhawra or Varun.

Well, speaking of which, Varun’s obsession with Afza, the mudya pairi that haunts Roohi brings absurdity to the comic proceedings. Meanwhile, their conflict over Roohi-Afza, two souls in one body, show an amusing side to the tale – two men fighting over who gets the girl, except none of them really bother to ask if the woman is interested at all. Consent, choice, and culture don’t go hand-in-hand for women in India. The film, Roohi, through a mix of comedy and horror (more due to the misogyny than the mudiya pairi) gives a satirical take on the same.

Roohi exposes the gender scripts we’ve been fed in our primitive society. A man can aggressively pick any woman he likes, but a woman who does the same has to be a “chudail”. Interestingly, in a scene, Kattani points out how the men in his family call their wives “chudail” too. On the other hand, the good woman is shown as docile and timid.

Turns out, even a mudiya pairi isn’t free from the ramifications of patriarchy. She is shown as a marriage-crazed woman because what’s our existence without a man?

Having said that, a twist at the end helps the women claim back power in the film. It makes female empowerment and autonomy emerge as the ideal way forward.

ALSO READ: AI Uses Tags Like ‘Official’ To Describe Men, Whereas Women Are Being Recognised For Their ‘Skin’ And ‘Smile’. What Even?

Comedy is on point, Most of the time

The film uses absurdity, references to other popular films, and well-written one liners efficiently to keep the audiences entertained. There are several scenes in which you’d laugh out loud! As always, Rajkummar Rao has delivered a convincing performance. Varun Sharma and Manav Vij are great in their parts too. Afza seems a little more promising than Roohi. However, while the interaction between the main characters come with an uproar of laughter and frolic, the characters could do with a little more depth and definition.

Verdict: Watch the movie without expecting it to be as thrilling as Stree. The satirical tale comes loaded with moments of laughter with a dash of the much-needed cringe. A must-watch, at least once!
Rating: 3.5/5

Jio Studios and Maddock films invited us to the press screening of Roohi.

ALSO READ: Inside Haryana’s Bride-Buying Culture: A Cow Will Cost You More Than A Woman