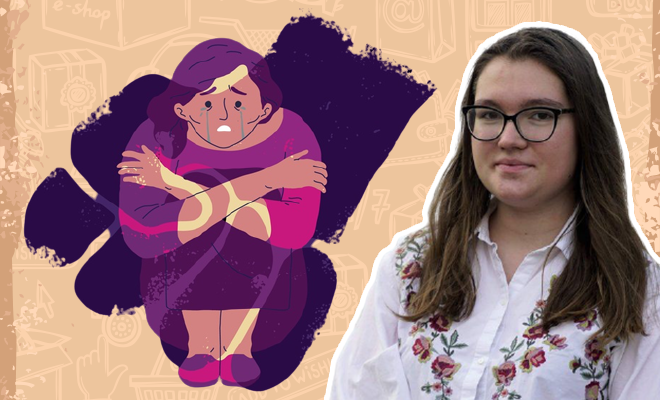 What were you doing when you were in high school? I know what I was doing and it is probably nothing to be too proud of—having body image issues, thinking about boys, obsessing over Harry Potter, crushing over Hrithik Roshan. You know, the usual. But teenagers today have their worlds expanded so wide, thanks to social media, that it is hard for them to not be affected about something that’s happening miles away from them. 17-year-old Krystyna Paszko from Poland was deeply disturbed by the rising incidence of domestic violence against women in the coronavirus lockdown. And so she decided to open a fake cosmetics store online, an idea that won her a European Union prize worth 10,000 euros (INR 8,70,000 approx) and got celebrities talking about it too.

Now you’re wondering, what’s a fake makeup store online got to do with domestic violence? And why would she win a prize for this ‘idea’?

In an interview with BBC, Krystyna talked about how she was heavily inspired by a French initiative wherein during the lockdown, people could go to the pharmacy and ask for a special mask, which was a coded way of letting the pharmacist know that they were a victim of domestic violence. We all know that while the coronavirus pandemic was the great leveller when it came to infecting people, its fallout had a much harsher impact on certain sections of the society, none more so than women.

Women already have a hard time talking about being abused or violated. For many of these women, leaving their homes to go to work, or having their abusive parent, spouse, relative or partner leave the home would be a much needed escape from daily abuse. However, the pandemic confined these women into their homes with their abusers. Furthermore, the frustration from cabin fever, losing jobs and livelihoods and even the paranoia drove many towards substance abuse, which further worsened the situation.

At such times, it would become difficult for people facing domestic violence in their homes to seek help, because therapy clinics and organisations offering care and protection were also suffering a crisis. And that’s where Krystyna’s fake online cosmetics shop came in.

At the online store, named ‘Camomiles and Pansies’, domestic abuse victims could hide their efforts to seek help and report abuse from their oppressors by pretending to shop for cosmetics. Brilliant, isn’t it? For example, the victim could use the customer service chat feature to ask about buying a product and instead of a sales rep, a psychologist would respond to them. They’d ask the victim how long their “skin problems” had been going on for, or whether their affected skin had a n adverse reaction to alcohol.

Krystyna initially thought she’d be doing this alone, or with a few friends, and be able to help a few people. However, soon after she made her idea known on her Facebook page, she garnered increasing support. Eventually, she reached out to a Women’s Rights Centre, which then set up a network of psychologists and lawyers who would offer assistance to the people who came to the website.

Krystyna talked to BBC about how, since the website began, they’ve managed to help out more than 300 people, including males too. “More younger women prefer to write on Facebook than to call on the phone, it’s more natural for younger women to use Facebook chat. Most of the men writing to us are teenagers.”

For this amazing initiative, Krystyna Paszko was awarded the EU’s Civil Solidarity Prize. But it was the word spreading on social media that seems to have made her a well-known face. In fact, I myself came across her work after I found that Game of Thrones actor and Queen In The North, Sophie Turner had shared @tanksgoodnews’ post about Krystyna on her Instagram stories.

While it is great that Krystyna and her fake cosmetics store idea are getting recognition, there is a rising concern amongst people, as seen in the comments in the above post that by talking about this prize on social media, we might have just busted the ruse. The merit of the idea lay in its secrecy but getting social media attention is the worst thing you can do to something you need to keep a secret. However, many have argued that perpetrators of abuse and violence don’t actually lurk around such positive accounts and might not even consider this news worth their time, and skip it.

I, for one, think this is a great initiative. Who would’ve thought a fake cosmetics store and online shopping could be utilised thus? I hope more teenagers can think like this to change the world and that more people benefit from it!