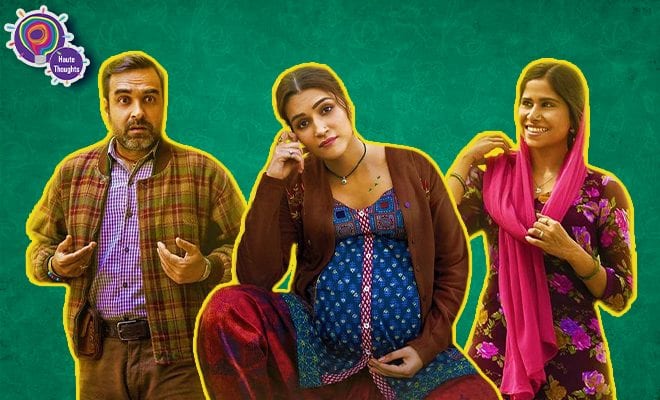 5 Thoughts I Had About The Mimi Trailer: Kriti Sanon, Pankaj Tripathi Are Back And We’re Expecting… An Interesting Surrogacy Drama

If Bollywood were a patriarchal institution (‘Were’ kya? It is), then OTT would be the feminist revolution that finally brought the conversation about women’s stories to the forefront. And now, look at them roll. The sheer range of stories that I’ve seen come out in the past couple of years, from female friendships and motherhood, the struggles of working women, to the sexual freedom of heterosexual and queer women…. And here I am, like a starved traveller, hopping from one platform to another to gobble anything and everything that is being served to me. The latest offering that looks pretty savoury from its appearance is Mimi, a dramedy about surrogacy, directed by Laxman Utekar (Luka Chhupi), and starring Kriti Sanon, Pankaj Tripathi, Sai Tamhankar, Supriya Pathak Kapoor, and Manoj Pahwa. The Mimi trailer was released this morning by Netflix.

Produced by Dinesh Vijan’s Maddock Films and Jio Studios, Mimi is loosely based on the Marathi film Mala Aai Vhhaychy, by Samruddhi Porey. The story, screenplay and dialogues are by Porey, Laxman Utekar, and Rohan Shankar. And the music and background score are (surprise!) by A.R. Rahman!

The film’s story is pretty evident from the trailer. Set in Rajasthan, and initially hesitant Mimi (Kriti Sanon) is eventually convinced to become a surrogate mother for a rich foreign couple, in exchange for 20 Lakh rupees. She is supported in her plan by Bhanu (Pankaj Tripathi), the man who brought the couple to her, and her friend (Sai Tamhankar) who even offers to let Mimi stay at her house so she can hide from her clueless parents (Supriya Pathak and Manoj Pahwa). However, while Mimi clarified all the issues she expected with her pregnancy, such as what to tell her parents, and whether her figure will get ruined or not, she never was prepared for the unexpected—the couple refusing to keep the baby she birthed. Faced with this dilemma, Mimi will now have to face her family, the society and probably a legal system that doesn’t do much to protect the interests of a surrogate mother.

The Mimi trailer is pretty interesting, and I am excited to get to know Mimi and the people in her world more, as well as how they help to deliver her out of this situation.

Here are 5 thoughts I had about the Mimi trailer!

1. I will never see a film/show with Pankaj Tripathi in it and not ask, “Sir, kaise kar lete hain yeh har time?”

The trailer opens with Kriti, Sai and Pankaj in the car, and the latter singing the emotion-laden title track of Anil Kapoor starrer Laadla (1994), that is an ode to motherhood of sorts. And yet again, with his straight-faced sincerity, Tripathi ji manages to make us laugh even before the gag’s punchline (or Mimi’s punch on his face) is delivered. And that’s just one of the many humourous moments that are sprinkled throughout the film where actor aces his trademark comedy that takes minimal words but delivers maximum laughs.

I don’t even know how the man does it every single time, and I haven’t yet gotten to the chance to meet him and ask this in person, yet! Manifesting that my great expectations of meeting Pankaj Tripathi and asking this question get fulfilled!

2. Yay to Pankaj Tripathi and Kriti Sanon reuniting on screen, but it’s going to get a tad awkward in the start.

While Rajkummar Rao as a badass babua tops my list of reasons why Bareilly Ki Barfi is such a rewatchable film, Pankaj Tirpathi and Kriti Sanon’s sweet baap-beti ka rishta in the film comes a close second. I loved the dynamic that they had! For me, watching the Mimi trailer instantly transferred that familiarity from Bareilly to Rajasthan, probably because it was these two actors that I saw together.

That being said, their relationship in this film is a whole different one. Bhanu compliments Mimi’s looks, plays her fake husband (and maybe real one later?) and in the trailer, she’s shown telling her family that he is the father of her unborn child. So changing that dynamic in my head is going to take some time!

3. Watching the family drama in Mimi is going to be hilarious, thanks to the collective comedic talents of this cast!

Mimi’s family is made up of some real characters, I am guessing from the trailer. And the actors playing those characters are such impeccable actors who’ve made us laugh in similar genre films plenty of times. There’s Supriya Pathak as Mimi’s dramatic AF mom, Manoj Pahwa as Mimi’s father, and Amardeep Jha as the grandma. Her brother is played by Sharukh Shaikh. The few scenes we saw between them, Mimi and Bhanu surely tease that it’s going to be entertaining to watch all the family drama play out!

4. The film has a chance to make a hard-hitting point about surrogacy and female reproductive agency here.

First, a little background. In India, commercial surrogacy was legalised in 2002. Coupled with poverty driving young women to this prospect and the fact that India lacked proper regulations, India become a popular destination for surrogacy tourism for international couples, like the one shown in Mimi, and even foreign homosexual couples. In fact, a UN study conducted in 2012 estimated that there were over 3,000 fertility clinics across India and the business would be making more than $400 million a year. However, in 2015, commercial surrogacy was outlawed. A new bill, which has been heavily criticised for allowing only altruistic surrogacy for heterosexual Indian couples with fertility problems is pending approval in Rajya Sabha as of 2019.

The reason this history lesson in surrogacy laws in India becomes required reading is because I have sincere hopes that the film isn’t all fun and drama, and has incorporated some commentary on the lack of proper legal framework to protect the rights and interests of surrogate mothers in India as well.

It isn’t just about who keeps the baby and the exchange of money. The fact that men in important positions continue to tell women what to do with their bodies, and want to snatch away their reproductive autonomy or shame them for it, is a major problem in India. Not to mention, the illegality and misinformation around it brings an element of shame, as we see how both Mimi is particularly clueless about the procedure when she begins, and knows that her conservative family will never understand her reasons for doing it. If not for her friends, a woman in her position would be rendered completely without a support a system in such a situation.

5.  I was surprised to see that A.R. Rahman has done the music for Mimi. So much to… expect! (Pun intended)

I was pleasantly surprised to see his name pop up in the trailer! And when it’s Rehman, you know you can expect some pretty good music! He’s even sung a song, I think, which plays in the second half of the trailer!

No need for a gender reveal party. Mimi will deliver its world premiere on July 30, 2021, on Jio Cinema and Netflix!

Kriti Sanon Opens Up About The Struggles She Faced While Making Her Way Into Bollywood. She Was Told She Wasn’t Pretty Enough