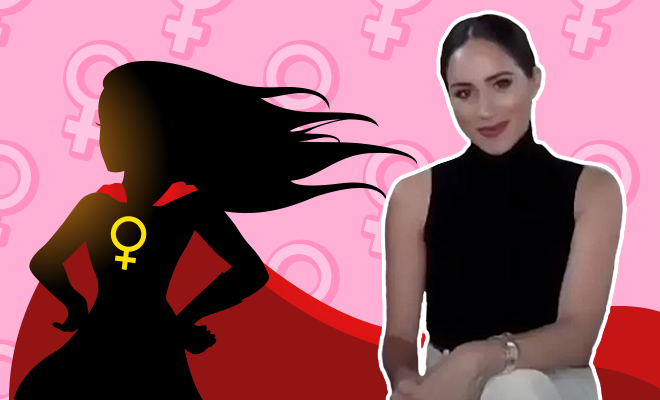 Meghan Markle Wore A Black Bodysuit With A Subtle Feminist Message For A Virtual Appearance.

There’s a saying that goes like fashion is very, very powerful. And, it couldn’t be any truer. Fashion is so much more than just putting on stylish and trendy clothes. It could be tool to speak without actually having to utter a single word. It’s the little details in the outfit that you would normally ignore which could have a deeper meaning. It could be to vocalise your opinions, take a stand against something, extend support, honour or simply show solidarity. The Duchess of Sussex, Meghan Markle knows the art of speaking through her fashion all too well and she nails it every time.

She recently appeared alongside Prince Harry for a virtual discussion with Nobel Prize Winner Malala Yousafzai on the International Day of Girl Child and opted for a chic black bodysuit. However, it was not your usual fashion savvy bodysuit but had a secret meaning behind it. You see, the bodysuit was from a brand called Tuxe, which specifically works of the ethos of uplifting and empowering women. The founder, Tamar Daniel set up the luxury bodywear brand after the 2008 financial crisis to get women through the professional challenges. The brand also provides career coaching to women and help them to stand on their feet.

Meghan Markle sported the Tuxe bodysuit for the discussion on the impact of Covid on the education of girls where she also spoke about the professional setbacks for women in the pandemic and how it could be overcome. Her choice of clothing is not only fitting for the session but also makes a powerful statement in support of the feminist movement. She let her fashion speak for her.

Meghan Markle and Prince Harry Team Up with Malala Yousafzai for International Day of the Girl​ https://t.co/bhzD22ZUWp

The Duchess of Sussex is no novice when it comes to wielding fashion to make a strong statement. Not long ago, she wore a tee and a face mask that paid homage to US Supreme Court Justice and Feminist Activist Ruth Bader Ginsburg. The grey T-shirt had the feminist icon’s initials monogrammed in blue and the face mask had one of her famous quotes that read “When there are nine”. This is just one of the many instances where Meghan used clothing to send a message.

Meghan never shies away from speaking her mind and wearing her heart on her sleeve, quite literally in this sense. I mean, her wedding veil (yes, the dreamy silk tulle one with floral embroidery) was to honour the 53 Commonwealth countries. The embroidery featured flowers of each country including English rose, Scottish thistle, Welsh daffodil among others. And, then there was a sweet fashion moment when Meghan wore a blue and green Burberry tartan coat with Black Watch pattern that has a special place in Scottish history on her first trip to Scotland. She also often shows support to the local brands and designers on her international trips by wearing their clothes and highlighting the country’s distinctive art.

Not just Meghan Markle, a lot of celebrities have dressed with intent in the past and made a fashion statement that left people gasp and applaud. You remember Rhea Chakraborty’s ‘Let’s Smash Patriarchy’ T-shirt? That sparked quite the debate but got Bollywood together to demand justice for her. There was also the time when Hollywood actress Natalie Portman wore a Dior cape at the Oscars this year with the names of eight female directors who were not nominated despite their incredible cinematic work. She walked the red carpet wearing the names of these women embroidered on the lapel of the cape to remind the Academy Awards about the filmmakers they didn’t add to the nominee’s list, for whatever reason. That was one fashion statement of feminism and solidarity and here’s another one by Markle.

Meghan Markle is a bonafide fashion icon and we love her expressive style. She doesn’t mind putting forward her POV and better yet says it with her fashion choices. Her classic and fuss-free wardrobe is seriously impressive as is and when she teams it with a purposeful message or meaning, she just blows us away. We love her secretly meaningful sartorial choices. It might need a closer watch to get the message, but it’s always worth it.