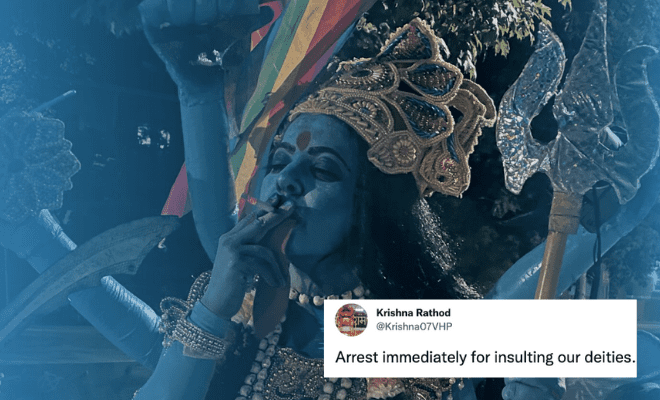 The religious sentiments in India are pretty fragile considering the diversity in our country. While we all understand creative liberty, people are not very accepting of it if it depicts a religion, god or religious identity in a negative light in whatsoever manner. Having said that, I must also point out that we’re not known for our tolerance. Recently, an Indian filmmaker, Leena Manimekalai was attacked by tweeple for the poster of one of her films for hurting Hindu sentiments. The film poster shows Goddess Kaali smoking a cigarette with a pride flag hanging in the background.

The poster shared by Leena Manimekalai is of a film directed by her that was launched in Toronto’s Aga Museum on July 2 as a part of the Rhythms of Canada, which is a week-long festival that celebrates the diverse tapestry of Canadian culture. The film titled Kaali is a performance documentary that was made with support from Tamil Arts Collective, Queer Summer Institute and School of Arts, Media Performance and Design, York University, Toronto. Check out the poster of the film.

Super thrilled to share the launch of my recent film – today at @AgaKhanMuseum as part of its “Rhythms of Canada”
Link: https://t.co/RAQimMt7Ln

This poster took Twitter by storm soon after it was posted after several users accused the filmmaker of hurting religious sentiments for depicting the Goddess in a negative light and demanded the poster be withdrawn. Several users also demanded strict action against Leena Manimekalai and the hashtag ‘Arrest Leena Manimekalai’ started trending on the microblogging platform. Take a look at the Twitter reactions.

Maa Kaali is seeing your all karmas, she'll give you the best befitting fruits of your karmas.#ArrestLeenaManimekali https://t.co/JYaO8rayHW

The mother goddess whom we worship🙏🏻 is being ridiculed like this. Shame on you 😡
Please report it by visiting this post and #boycott this https://t.co/VgwFztxP4H#ArrestLeenaManimekalai pic.twitter.com/FS9fVjVwog

You'll understand your mistake when you face the wr@th of Maa Kaali. The cu₹se from her devotees will d00m you soon for demeaning their faith& hurting people. It's not only illegimate, but sinful too. Hope karma finds your filthy mind, @LeenaManimekali #ArrestLeenaManimekali https://t.co/UKoF5mDraG

Complaint filed by @vineetJindal19 with @DCP_CCC_Delhi against #LeenaManimekali for her derogatory clip and photo of Maa #Kaali from her Film. @LeenaManimekali you will face the consequences for doing this illegal act of hurting hindu religious sentiments. #ArrestLeenaManimekali https://t.co/jysu4O1s5Y

Why are Hindu gods, goddesses and articles of faith mocked, ridiculed, demeaned at the altar of 'liberal creativity'? Must Hindus be punished for their tolerance? Aren't Hindus being forced to adopt a more hardline posture? https://t.co/B5wS8J7xJu

Also Read: Indian Women On Twitter Are Calling Out Gynaecologists For Diagnosing Them With “Unmarriedness” Instead Of Treating Their PCOS

Responding to the negative reactions to her film poster, Leena Manimekalai shared that she has acted, directed and produced the performance documentary Kaali. She went on to reveal that the film revolves around the events of one evening when Goddess Kaali appears and strolls the streets of Toronto and talks about choosing love over hate amidst the racial differences. She also urged people to post the hashtag ‘I love you Leena Manimekalai’ instead of ‘Arrest Leena Manimekalai’ when they come across the poster.