Kirti Kulhari Says “Actors Have To Make Choices That Are Different” To Not Be Typecast. It Makes Sense But It Isn’t Easy 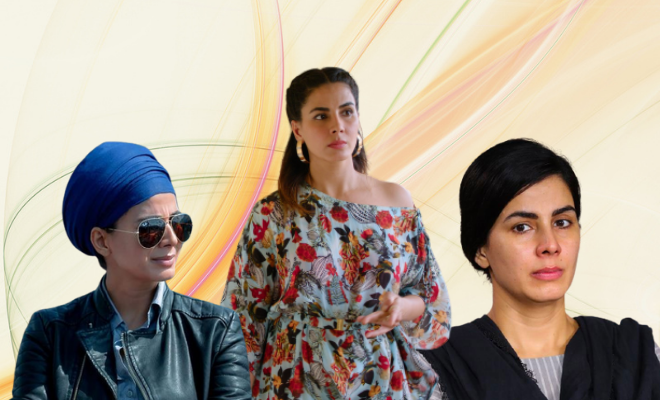 Even as the shadow of censorship and screening looms threateningly over entertainment content, we’re grateful for all the variety that the OTT boom has brought to India. Good actors who, due to their lack of industry connections, exposure, or a bunch of other reasons, were relegated to roles way below their calibre are now finally getting a chance to prove their mettle. It’s given a new lease of life to dismissed actors, and opened doors for the news ones. But even in this refreshing space, it is easy to get typecast, as rightly pointed out by Kirti Kulhari.

The actress, whom we last saw in The Girl On The Train playing a British cop, has reaped some pretty meaty roles off the OTT crop, including a lead in Amazon Prime Video’s International Emmy nominated Four More Shots Please!, Bard of Blood on Netflix and the acclaimed Criminal Justice 2: Behind Closed Doors on Disney+ Hotstar. Meanwhile her Bollywood career continues to flourish with roles in films like Mission Mangal and Uri: The Surgical Strike.

If you’e thinking about how versatile the roles that she has picked are, then Kirti would like to take full credit for her astute decisions. The actress believes that actors, and not the casting directors or filmmakers, are responsible for not getting typecast in similar roles, and it is up to them to make different choices, even say “no” to roles on occasion.

In an interview with IANS, she said, “”You are as responsible for being typecast as the person who is typecasting you. You have to make choices that are different and learn to say no. It is not easy to say no but if you don’t, you cannot complain. If you stand up for the roles you want to do, you will break out of that mould eventually.”

Kirti further elaborated on how stereotyping as a phenomenon exists across the board, whether it is movies, television or OTT. So if actors want to actively avoid that, they need to start dropping roles that are similar to what they’ve done before.

“Typecasting or stereotyping happens because of people. You will have the same issue everywhere. Honestly, it stopped happening for me since a couple of years back with my repeated showcasing of different characters each time. People know she will not do what is done already. I get something new every time. I have broken the mould of the whole typecasting thing. I will not even touch a script that has a character similar to what I have done before. This is what is exciting for me and that’s what gets me going as an actor. If I need to do the same thing again and again then what’s the point. There are people who do it. But for me, variety in my roles is very important. I look for it all the time,” she says.

Of course, this is a lot easier said than done. For many actors, declining roles can be a question of declining a chance to earn good income. Or it could even cause a huge gap in their career trajectory, and believe it or not, corporate isn’t the only space where career gaps are suspiciously frowned upon.

However, while Kirti understands that and even admits that sometimes everyone gives in to a typecast role due to comfort and familiarity or a financial reasons and so on, the right thing to do is to stick it out and persist with your decision. She finds it quiet empowering.

“I won’t say it doesn’t bother me, that is the nature of our job, the uncertainty, and unpredictability. That stays at the back of your mind. There are times when you tend to give in to the fear of not having work in the future. But that is the wrong thing to do. We have all done it. You do make decisions on a certain project based on different things. But we all have to be careful not to choose something out of desperation or fear. It’s not the easiest choice, but you need to learn to stay true to yourself. For the last two to three years, I am saying yes to what I want to. It is very empowering to be in this phase.”

Also Read: 5 Thoughts We Had About The Pagglait Trailer: Here For Sanya Malhotra, Farting Dadi And ‘Crazy’ Wise Women!

What Kirti says does make sense to a certain extent. When I say Nirupa Roy, you instantly think of a sobbing, bechaari, Hindi film ‘Man’. When I say Bindu, you think ‘vamp’ or desi Cruella. And if I were to say Jagdish Raj, the current generation might not even know that he holds a Guinness World Record for being the most typecast actor, but one look at his face will remind you that he was the cop in almost every other Hindi film from the 60s, 70s, and 80s.

Bollywood and the Indian entertainment industry is notorious for stereotyping actors, even some of its A List ones like Shah Rukh Khan, Salman Khan, Akshay Kumar, Ajay Devgn and Amitabh Bachchan. This trend continues with the younger lot too. Tiger Shroff is an action star. Bhumi Pednekar continues to play small-town girl roles. As for Ranbir Kapoor, the brilliant actor has been playing the lost boy on self-discovery journey for quite some time now.

For actresses in India, it is much worse. There’s already a dearth of good roles. And female actors instantly get typecast. When Alia Bhatt made her debut with a Poo-from-K3G inspired character in Student Of The Year, she was dismissed by many as just another star kid who would play ‘bimbo’ roles. Her goof-up on Koffee With Karan further cemented that image of her. However, she stepped up to play different characters like the ones in Highway, Raazi and Dear Zindagi, and that has made a major difference. Today, we see her as Gangubai Kathiawadi and we realise that she can be her as effortlessly as she could be Shanaya.

However, the other side of the argument remains a stark point we cannot dismiss easily. While A-listers and star kids do have the luxury of being picky about their roles, struggling actors might have to either pick between a huge gap in their career, plus financial instability and allowing themselves to do roles that might typecast them but at least pay their bills and keep them in the public eye.

It’s a tough one, but we hope those who can make that choice, choose to Kirti Kulhari’s advice to diversify.