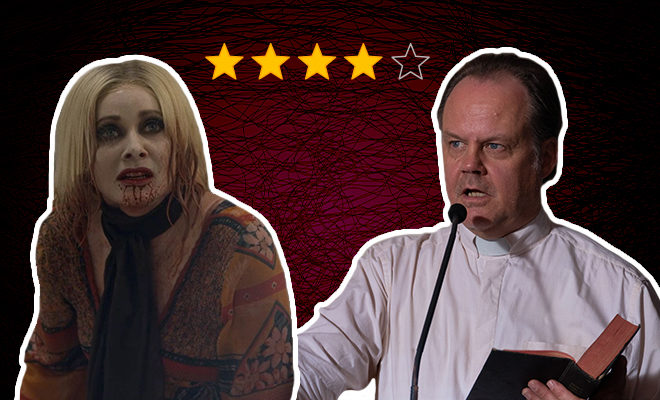 I don’t want to hurt the feelings of any other genres that might be listening, but I think horror comedy is slowly becoming a favourite. With horror, as with comedy, it is always a challenge about what new you can do in a genre that has seen it all. And yet, there is content that exceeds expectations with fresh and impressive iterations. A latest addition to his list is Jakob’s Wife, a film that tackles the emancipation of a repressed housewife after a tryst with a vampire. It is directed by Travis Stevens, and written by Stevens, along with Kathy Charles and Mark Steensland. It stars Barbara Crampton (also a producer) Larry Fessenden, Bonnie Aarons, Sarah Lind, Mark Kelly, Jay DeVon Johnson, Nyisha Bell, Robert Rusler, C.M. Punk, Omar Salazar, Ned Yousef, Giovannie Cruz, Armani Desirae, Monica L. Henry, and more.

Anne (Barbara Crampton) is married to a small-town minister, Jakob Fedder (Larry Fessenden) for the past 30 years. And her life is as mundane as can be. She listens to her husband’s sermons speak of men loving their wives unconditionally, and knows that Jakob does love her. But the spice in their life—the fun, the lust, the adventure—is all missing. Jakob has taken he for granted for too long, talking over her every time she tries to get her thoughts out. And she has learnt to live with it.

That is, until her tryst with an old flame pushes her into the arms of The Master (Bonnie Aarons), who bites her and turns her into a vampire. Initially confused and scared, Anne’s appetite has now been whetted by the taste of blood, but also power, freedom and excitement of the unknown. And she clearly wants more. But with The Master dogging her every step, getting her to join him completely, they’re raking quite a bit of a body count in their wake. And then, there’s also Jakob, a minister and a man of God who is suddenly coming to terms with this new Anne, no longer the timid woman he loved and married.

Jakob’s Wife gives plenty of nods to old school horror, à la Bram Stoker’s Dracula, that might not feel too scary now but could definitely creep you out. You know there is something behind the actor, but the camera takes its own sweet time to pan and reveal, and those moments were filled with dread, helped amply by the background score and the expressions of the actors. Of course, not everyone can do a convincing job of it, but the Travis Stevens film manages pretty well. There are literal vampire coffins in dark, dingy places, with rats scurrying around and fog and bloodshot eyes. Basically, remember how Bella Swan expected cobwebs and moats in the Cullen house in Twilight? Well, she’d get exactly that here. It’s nice to go back to original vampire lore, where the Bible, Holy Water and silver works on them and you can keep them at bay with the cross. The vamps also do not look ‘sexy’ and ‘porcelain’, but are downright ugly in their true form. Phew!

Most vampire shows and films that I’ve watched treat vampire feeding as this sexy, seductive dance, with just a trickle of blood dripping aesthetically down the neck, and making a mess only when things got intense. But Jakob’s Wife goes all out with the blood spattering and the bodies twisting and turning, and the sheer goriness of it all is, for the lack of a less-creepy work, refreshing. When the vampires in this film go for the kill, they really do go for the jugular, ripping the body apart and looking like the terrifying monsters they are. I loved the way the practical effects made it look so real and effortless, when I know it mustn’t have been!

I found Jakob’s Wife to be hilarious in its smallest of details, like the daily interactions and fights between Jakob and Anne, which Barbara Crampton has taken inspiration from her own married life to play out as realistically as possible. Even the small-town behaviour, where the cops just take your word for everything, and people just walk into each other’s houses, and are protective of their friends. It’s not ‘funny’, but there’s a very subtle humour in these ways that is nicely brought out. Of course, there are a few outrightly funny moments as well, like Anne’s dentist appointment!

Barbara Crampton is a scene stealer, brilliantly supported by Larry Fessenden and the rest of the cast

The role seems like it was custom made for Barbara Crampton, but I know that she worked super hard on it with the director and writers to maker the role her own. And it shows because the horror regular is just fantastic as both Anne, Jakob’s wife, and Anne the vampire. Her expressions, when she’s alone in her home and redecorating while discovering her powers, or when she’s angry at Jakob and finally speaking her mind, are incredible. Her performance is complemented by Larry Fessenden as Jakob, and I think their chemistry as a long-time married couple was so perfect that when the end came on, it really sold me on it.

I also enjoyed the scenes with Carol and Bob Fedder, played by Sarah Lind and Mark Kelly, as well as every time  Jakob and Sheriff Mike Hess, played by Jay DeVon Johnson, had scenes together. The Sheriff always looked like he knew more than he let on, but he just wouldn’t be bothered to stir up trouble unless it were staring him in the face. A shoutout also to Bonnie Aarons, who did a splendidly creepy job as The Master, and nailed that oily demeanour!

I’ve always been fascinated with vampire stories, and at first, I thought it was because the immortality associated with vampirism would mean that the story would never end. We’ve seen it in Dracula, Twilight, The Vampire Diaries, The Originals and countless other films and television shows, that when you’re a vampire, always and forever is your b*tch. And as humans, the allure of cheating death and never-ending stories is one of our most basic instincts.

It was only much later (thanks to a story arc in The Vampire Diaries and eventual reading of lore on the internet) that I realised how the true allure of vampirism, for women in particular, was power, freedom and unapologetic hedonism. Women have been repressed for millennia, and being with an indulgent creature or being the indulgent creature with no remorse, no guilt, and no need to adhere to pretentious morality in their death is what makes them so full of life, and able to enjoy all the pleasures they couldn’t enjoy in their mortal lives.

Often, fictional characters who come in contact with vampires have found some kind of adventure and liberation. Maybe from their mundane, small-town existence, in which they always felt like they didn’t exactly fit. Like a Bella Swann. Maybe from the dichotomy of good and evil, like Elena Gilbert. And sometimes even a way to unleash their inner darkness or darkest sexual desires, as is the most common iteration of women enticed by vampires and Buffy The Vampire Slayer.

To drink of a vampire’s blood was like biting the Forbidden Fruit, aptly represented through subtext throughout literature, art and folklore, as well as the cover of the first Twilight book where Edward Cullen’s pale white hands are holding an apple. It wold suddenly give you the knowledge that there was a whole hidden world out there, both literally and metaphorically, that you had been missing out on for so long.

And that’s exactly what happens with Anne in Jakob’s Wife. The Master, having turned her into a vampire, has empowered her to explore her sexual desires, say no to the things she doesn’t want to do, and say yes the life that she has always wanted but never spoken up for. Of course, this choice is made tougher, because being a vampire means Anne would be risking her marriage to Jakob and have to deal with the bloodlust, the subtext being how women who chose to live such unabashed lives often have loved ones or family members boycott them and it can be a very lonely life.

There’s also the dilemma, I suppose of leaving one master, Jakob, and following another, The Master, and whether Anne really wants to do that. And that’s why the ending of Jakob’s Wife feels so perfect. I won’t spoil it for ya, but you’ll see what I mean! Another thing that I loved was Jakob’s character journey, from being a devout man who took his wife for granted to someone who had to cross a lot of lines and make decisions he’s never made before.

As someone who loves vampire stories, and is a huge fan of What We Do In The Shadows, Jakob’s Wife was right up my alley. Within its 1.5-hour run-time, it built these characters up, gave us enough backstory, made me care for them, and then when the chaos began, made me root for a happy ending too. The subtext sometimes might’ve been too overpowering, but I love me a good spin on women’s stories. So if you love vampires, horror, dark comedy, gore and oodles of subtext about female repression, Jakob’s Wife is unmissable. But guess what? You should watch the film if you’re a die-hard romantic too! *wink*

Jakob’s Wife was showcased at the SXSW Film Festival, and is all set to release in theatres, on VOD and digital on April 16, 2021.