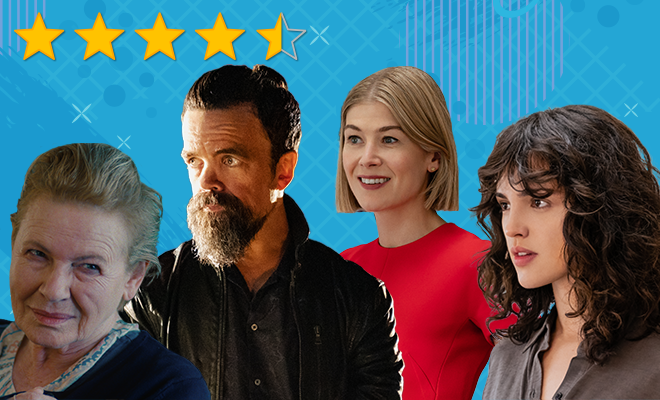 When you’re a kid, you’re all about the heroes. You root for Iron Man, Stefan Salvatore and the team-up of ACP Jai Dixit and Ali. And then you grow up, realise that, for some inexplicable reason (okay fine, we know why) bad guys have much more swagger, and suddenly, your heart desires Loki’s mischief, Damon Salvatore and Klaus Mikaelson’s devil-may-care attitude, and Mr. A’s victory. There’s something about the diabolical, unpredictable adventure that they can take you on, which makes their appeal shoot through the roof. And that’s exactly why I enjoyed a lot the Rosamund Pike and Peter Dinklage starrer I Care A Lot. Currently streaming on Netflix, the dark comedy is written and directed by J Blakeson and also stars Eiza González, Chris Messina, Macon Blair, Alicia Witt, Nicholas Logan, Damian Young, with Isiah Whitlock Jr., and Dianne Wiest.

About what is I Care A Lot?

In the United States, if you’re a citizen that cannot take care of themselves, the government’s got your back with a whole system in place to do it for you. And Marla Grayson is someone who has found the perfect racket to exploit this system. She is remorseless, confident and sharp woman, who works as a court-appointed guardian for elderly wards who are proven to be unable to take care of themselves. Marla steps in as a helper but once her senior wards are locked up in a care home, she helps herself to their financial assets by charging them a hefty fee for various expenses.

Of course, this isn’t a one-person job. Marla Grayson has a team that helps her do all this shady things legally. She has a partner-cum-lover, Fran (Eiza González) who does all her research. A doctor (Alicia Witt) she keeps bribing to pass on potential ‘cherry’ clients to her who are ripe for the picking, and testifies to their invalidness in court so Marla can take over. And she has the manager (Damien Young) of the elderly care home in her pocket too, who ensures that no family members can meet these wards and derail this well-oiled game.

However, this whole operation threatens to come crashing down when Marla targets a seemingly harmless but rich old woman called Jennifer Peterson. Turns out, she isn’t exactly the lone bird they thought she is, and the man who wants to get to her is one dangerous Russian mafia guy called Roman (Peter Dinklage)! He sends his lawyer, and he sends his cronies, but nothing seems to work. Yet.

Things get darker but also hilarious as both Marla and Roman try to one up each other, because a lot more than just money is at stake!

First of all, that title deserves a hat tip for the absolute irony.

We all love the bad guy with a sad backstory. But you know what’s harder? To have the audacity to make your characters unapologetically evil and still have your audiences root for them. It’s a feat that J Blakeson manages spectacularly with I Care A Lot.

You can see that he and his characters doesn’t care a lot about the twisted morals that would be required to do the things they do. And I love that we don’t get any backstory or justifications for it. Marla Grayson just wants to be filthy rich because she knows of a time when she wasn’t and it sucked. That’s it. No sad sob story or much background about how and why Marla Grayson became who she was, or came up with this scheme.

I’d like to think this was a deliberate decision, because we needed to hate Marla, helped amply by every inch of Rosamund Pike’s look in the film and her demeanour, every little facial expression and gesture. And once you hated her for looting (legally, of course) these poor old people, enter Roman.

Now see Roman’s bad too, he’s a Russian mafioso for crying out loud. He has surely killed or had people killed and has his hands upto his shoulders in criminal activities. But Blakeson begins by showcasing the softer, emotional side of Roman who just wants his mother back from the bad lady that has her shut in a fortress of elderly solitude. And just when you’ve decided you want to take his side, BAM! He reveals his true colours. The same thing happens with the sweet old lady, who is definitely not who we think she is, played impeccably by two-time Academy Award winner Dianne Wiest.

Normally, I get into talking about the finer aspects of what I liked or didn’t like about the film. Which in this case, would have to do something how, despite his clever writing, Blakeson sometimes relinquishes his tight grip on what’s happening. But I was so completely occupied by the question—What are these crazy assholes going to do next?—that I didn’t care a lot. The characters unabashed ruthlessness lends a certain unpredictability to the plot, which kept them constantly fighting for breath and makes you, the audience, scared for what’s going to happen and how it’s going to end!

But… about that ending!

Fret not, no spoilers here. But I do feel a bit conflicted about the ending. In a way, it seemed like it tied up nicely to how the film began, the full circle, if you will. What’s more, it was a perfect way of saying that you could be the biggest badass in town but the real bitch will always be Karma. It’ll find a way to come bite you in your ass.

And yet, the whole karma thing gave it a sort of happy ending? I don’t even know if we can call it that. And  I may be turning cynical in this horrible real world, or too spurned by the Supernatural ending, but I didn’t want it to be this ironic. Because IRL, the bad guys do win a lot. And since this story is rooted in a real scam, I was kinda hoping we got real with how it ends too.

I kept telling myself how Rosamund Pike’s Marla was like Cersei on steroids, with Peter Dinklage’s Roman being her perfect match.

Look, Lena Headey is irreplaceable. But if they ever wanted to cast a Cersei 2.0, I pitch Rosamund Pike. She is incredible as Marla, with not a bone of remorse in her body but fiercely protective of the people she loves. Maybe it was Dinklage’s presence and the whole game being played to seize control, but I could see so much of what made Cersei an interesting villain, in Pike’s Marla.

I love how Marla was written, particularly her relationship with Fran, which existed without trying to make any sort of statement. Just like there was no judgement or need to explain intentions between them, so was their portrayal of that dynamic. Marla and Fran were sexy together, a power couple you could route for.

Every time I think of how the actor who played the shy and demure Jane Bennett in Pride & Prejudice is the same one who played Amy Dunne in Gone Girl. Bu Pike can turn on this look in her eye and her smile that is peak sociopathic, which is matched perhaps only by Wiest’s sinister smile when she is threatening Marla with what might be coming for her.

Continuing with the Game of Thrones references, Roman is definitely not Tyrion, and that’s important because Roman is all muscle, and no intellect. So he sends in his men without so much as a backup and often resorts to violence and money to get his way. In fact, he is more like Nick Dunne from Gone Girl, in the way your feelings for him change. It could possibly be Peter Dinklage’s overall appeal, the residual affection for his GoT character and how Roman is introduced with a sweet tooth, that a part of you wants him to win. After all, Marla did throw the first punch at him.

But then again, Pike’s Marla Grayson, just like her Amy Dunne in some ways, is a feminist. A twisted one, yes, most certainly. But a woman who is so unafraid of a man, and doesn’t take shit from him, whether he is a random dude on the street or a Russian mafia boss… now that’s something I can get behind.

Verdict: I Care A Lot is deliciously evil and a whole lot of fun!

I thoroughly enjoyed the film! I Care A Lot is like this dark comedy that could easily be a hilarious AU of Gone Girl! J Blakeson writes a clever film that is so deliciously evil, it’ll have you rooting for the bad guys, played to perfection by Rosamund Pike and Peter Dinklage. But which bad guy? That’s the question, isn’t it?

I Care A Lot is currently streaming on Netflix.