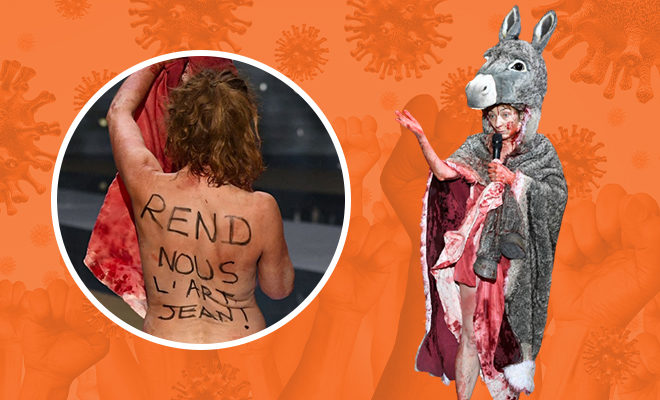 This last year has taught me a lot of things, and the biggest teaching of them all is to not be instantaneously judgemental. Things are rarely black and white, and we shouldn’t easily dismiss other experiences because they don’t align with our own. Take the coronavirus induced lockdown for example, a phenomenon perhaps not as global as the pandemic itself, but definitely enough to destroy the global economy massively. But while they might’ve helped us battle (successfully) the virus, it has destroyed livelihoods, our social ways, culture and sanity for many. The entertainment industry has been one affected massively by this shutdown. And that’s what French actress Corinne Masiero was protesting when she stripped at the Cesar Awards on Friday.

The Cesar Awards are the equivalent of the American Oscars for France, which means it’s a massive platform to make a statement. And Masiero made a rather bold one as she walked on stage to present the award for Best Costume. The 57-year-old Capitaine Marleau actress was draped in a donkey outfit, complete with grey fur and and a donkey head hoodie. But there was something more macabre underneath.

"No culture, no future."

She announced to the audience “Is that too trash? I have a last one,” as she took off the donkey overcoat to reveal what looked like a blood-soaked white dress. She also had tampons for earrings. Eventually, she stripped off the dress too and her body was covered in messages. On the front was “No culture, no future.” And on her back was a message directly addressed to the French Prime Minister Jean Castex—“Give us back art, Jean.”

With her act of protest, Corinne Masiero was speaking for the thousands of artists, technicians and actors in the filmmaking business who continue to suffer the adverse effects of cinema and theatre shutdowns in lieu of the coronavirus lockdowns. In France, cinemas and theatres have been shut since three months since the recent wave of lockdown. With their livelihoods gone, projects halted, and finances affected, life has indeed become nightmarish for many in the entertainment industry, especially since there is reportedly no assistance or support from the government for sustenance. But there was also an added layer here. It is not just the makers of art that are suffering. The lockdown is keeping people from absorbing culture too, which is what enriches their lives and minds.

Masiero’s protest became the biggest Cesar Awards news for the night, with some people supporting her cause and many others saying that it was cringey or that even though her protest was valid, this wasn’t the right way to do it.

Honestly, impactful protesting is about being disruptive, and the world has rarely been changed by silent ones. While those with the luxury can preach all about imposing restrictions and continuing the lockdowns, there are those who might end up losing their lives to other deadly occurrences, like financial crises, mental health issues from losing their jobs, or loneliness and depression from being deprived of culture and socialising. In such scenarios, it is most governments that are being held accountable for ensuring that even if they do impose such restrictions on their country’s citizenry, they ensure all their needs sustenance needs are met.

Red carpets at award shows like the Oscars or Grammys are usually great places to make political statements with fashion. We’ve seen countless celebs do it over the years, whether it was wearing black or sporting black ribbons to support Times Up and #MeToo movements, or Lady Gaga wearing the meat-slab dress at the 2010 MTV Music Awards to protest the US government’s policy that didn’t allow openly LGBTQ+ members to serve on its military. Recently, Amy Poehler and Tina Fey hosted the Golden Globes, where both drew hearts and stars on the back of their hands to promote Poehler’s film Moxie, in which features the same thing as a gesture of solidarity with the feminism cause that brings the girls at a high school together to protest sexism. And remember when Rhea Chakraborty wore that ‘Smash The Patriarchy’ tshirt, sending a silent but powerful message?

So was the actress stripping off her blood-soaked clothes and standing naked on a stage at an awards show too much or perfectly shocking? That’s not an easy answer since people’s sensibilities are not black or white either. But one thing is for sure. She got everyone talking about it. Now whether it disseminates the importance of her message or overpowers the cause and makes it all about the act of stripping remains to be seem.