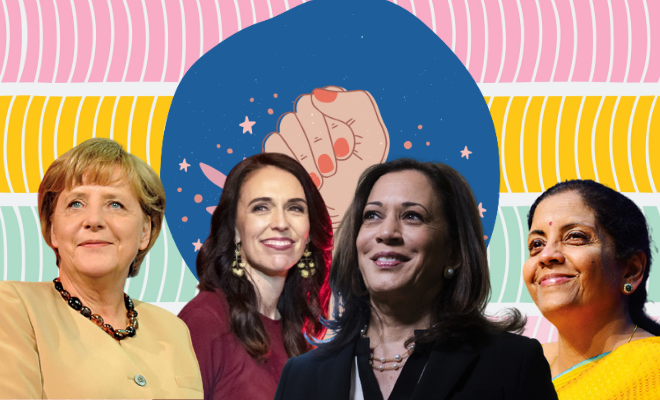 You guys, 2020 is almost over, good riddance to bad rubbish! It has been quite a topsy-turvy one by usual accounts, and even now, in its final days, it continues to surprise us with news about mysterious new illnesses and speculated alien activity (WTF are those monoliths?). But this, villainous as it has been, has also raised up some unlikely heroes. In particular, the world has seen what having women in forefront, running things in a crisis, can do for us. And do we see progress? A new way of governance, of business, of advancement in science and technology, of being human? Hell to the yes! When we give women power, the way they wield it is different than their male counterparts. Forbes, in its 17th annual Worlds’s 100 Most Powerful Women roundup, has included such women like Angela Merkel, Jacinda Ardern, Kamala Harris, Ava DuVernay, Sheryl Sandberg and others, who wielded this power and made their mark.

These powerful women hail from 30 different countries, and belong to four generations. Amongst names like Germany’s Chancellor Angela Merkel, New Zealand Prime Minister Jacinda Ardern, United States Vice President-elect Kamala Harris, and the Queen Elizabeth II of England, we’ve also got our very own Finance Minister Nirmala Sitharaman making the power list. Of course, the list isn’t just comprising women in politics, but also women from across the spectrum—from science, technology and business to philanthropy, activism, media and entertainment. There are 10 heads of state, 38 CEOs and five entertainers in the list.

A lot of these women, especially the heads of state that have made it to the list, have garnered international acclaim for their response to the Coronavirus pandemic. How even now, as we’re close to a vaccine, and perhaps to some normalcy, they continue to hold the fort and keep the infection rates in their respective nations under control. There have been several new studies, conducted during these very months of the pandemic, that have yielded results which suggest that female leaders have managed to more successfully tackle COVID-19 compared to their male counterparts.

In the words of Norwegian Prime Minister Erna Solberg“Democratic countries where human rights are respected and where women are able to reach top positions in society are also the countries that are the best-equipped to handle crises by Covid-19.”

Indeed, that’s been true. New Zealand PM Jacinda Ardern, led her nation to become the first one to have successfully battled COVID-19. Life resumed to regular much, much earlier in NZ than it did in the rest of the world. She ably handled not just the first wave of virus infections in NZ but also the second one, by timely implementing of strict lockdown and quarantine policies.

Similarly, Angela Merkel, the first woman Chancellor of Germany, has been leading the charge of Germany since 2005, steering it out of recession and turning it into the leading European economy. Her efforts to combat COVID-19 have, much like her fellow female heads of state been much appreciated.

Taiwan’s President Tsai Ing-wen (No. 37) implemented a rigorous contact-tracing program in January—as a result, to date, the island of 23 million people has lost only 7 people to the virus #PowerWomen pic.twitter.com/rK9H921blp

Taiwan’s President Tsai Ing-wen has also been applauded and has made to the list for implementing swift orders during the pandemic, which included establishing an extensive contact-tracing program since way back in January. No wonder, of its 23 million population, Taiwan has only lost 7 citizens to Coronavirus. I mean!

India’s Minister for Finance and Corporate Affairs, Nirmala Sitharaman ranks at #41 on this list. While in her own country, her policies might not be well received by the masses, she is the first female finance minister of the world’s largest democracy. And that merits you a spot on the list, above the Queen of England. Sweet.

United States Veep-elect Kamala Harris, whose election as the first ever woman of colour and Jamaican-Indian descent VP remains a pretty huge deal, is at #3. Voters rights activist Stacy Abrams, founder of Fair Fight, is the #100 on the list.

India makes an appearance in the business section of the 100 Most Powerful Women, with Kiran Mazumdar-Shaw, India’s richest self-made woman appearing on #68.

She joins the likes of Julie Sweet, CEO Accenture; Renuka Jagtiani, chairwoman and CEO of Landmark Group from UAE; Raja Easa Al Gurg, the first ever Emirati woman appointed to the board of HSBC Bank Middle East Limited (HBME), American fashion mogul Tory Burch; and Maggie Wei Wu, the CFO of Alibaba, amongst many other illustrious businesswomen from around the world.

Another Indian, the third to make the Forbes 100 Most Powerful Women list, is Roshni Nadar Malhotra, who recently became the CEO of the HCL Corporation, on #55. She is also the vice chairperson of the publicly traded HCL Technologies. Not only is Roshni responsible for the strategic decisions taken by the $8.9 billion IT company that was founded by her father Shiv Nadar, she is also engaged in philanthropic work focused on education in India.

Other incredible women from the field of business that are on this power list include, Sheryl Sandberg, COO of Facebook, and Susan Wojcicki, CEO of YouTube.

From Melinda Gates and Lauren Powell Jobs, whose philanthropic efforts have earned them positions on this list to entertainers like Beyoncé, Reese Witherspoon, Rihanna, Taylor Swift and Lucasfilm President, producer of five Star Wars films and honorary lifetime Oscar winner Kathleen Kennedy, the list is full of women who’ve made a difference to the world through their benevolence, compassion, empathy and art.

Here’s a huge congratulations to these women, who haven’t backed down! More power to all of you, as you’re proof to those who think women aren’t capable enough.