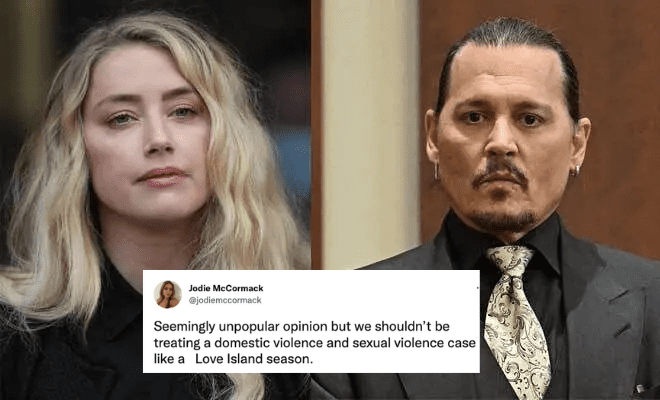 Twitter User Points Out How Meme-ification Of Johnny Depp And Amber Heard’s Trial Is Messed Up. How Are People So Insensitive?

Even amid the week-long break, Johnny Depp and Amber Heard’s defamation trial has been making headlines for all the wrong reasons. We all know how brutal social media trolls can be and now it seems like they’ve crossed all lines of sanity and reasoning. Ever since the trial began, social media has been flooded with videos from the trial where users have pointed out flaws and issues in the case and there have been memes, lip-syncing videos, TikTok, Reels and even YouTube videos on the case. Social media users have been using audio from Johnny Depp and Amber Heard’s trial and their testimonies reenacting it dramatically and mocking them. TBH, this is shameful and some social media users seem to agree.

Recently, a social media user took to Twitter to point out that netizens need to stop treating a defamation trial detailing incidents of domestic violence and sexual assault as a drama series. The user went on to point out that she’s not defending Amber Heard but the fact remains that these crimes are being discussed in court and one should not trivialise these things and reenact it because there are real people involved in this case which happens to be ongoing and social media users should not be using court audios and reenact crimes being discussed.

I am not defending Amber at all but when crimes are being discussed in a court you should NEVER dress up as the people and act out the crime using audio from the court.

These are real people in an ongoing case. This ⬇️ should not be a TikTok trend no matter who is guilty. pic.twitter.com/oQmidiRc31

Making the point she deserves it or brought it on herself just isn’t relevant it’s still fucked up.

Imagine thinking: ”I’ve a great idea for a video to post online. There’s this court case going on, let’s dress up as the people and act out crimes and use court audio.”

Also, I am aware it's a defamation case, I could have worded that better.

However, the case was brought forward as a direct result of domestic violence and sexual assault allegations.

Making TikTok’s joking about a woman’s sexual assault or a man’s violence at the hands of his wife isn’t exactly an acceptable way to digest it though is it Kevin?

Ever since Johnny Depp and Amber Heard’s highly publicised trial began on April 11, the videos from the trial have been dissected and remixed by fans and trolls. And while I understand the users need to defend Johnny Depp and call out Amber Heard but the fact remains that the case is in court and we are all on the other side of this trial and have no clue about the reality of it all. It isn’t fair that we sit in our privileged position and pass remarks on someone else’s life just because that person is a public figure. Moreover, making fun of real crimes in the form of videos could not only trigger survivors who come across it but it is also disrespectful towards people who have suffered through it all. Another thing to note here is that doing so is also extremely disrespectful towards the court that is hearing the case.

Also Read: Amber Heard Recounts Being Sexually Assaulted By Johnny Depp With A “Bottle”, Claims He Threatened To “Carve Up” Her Face

The fandom culture is understandable but social media users have been looking at this case in a one-dimensional manner as a story instead of considering the fact that these are real human beings with feelings, emotions, trauma and triggers. Fandoms have turned this trial into a drama series where they’re cheering for someone and booing the other one. Social media users have wasted no time in vilifying one person and supporting the other. And this needs to stop because we are not the court and this is not a media or a social media trial. And no, I’m not defending Amber Heard but the fact is that who is in the wrong and who isn’t is not for us to decide and we don’t get to mock someone whatever the case may be.