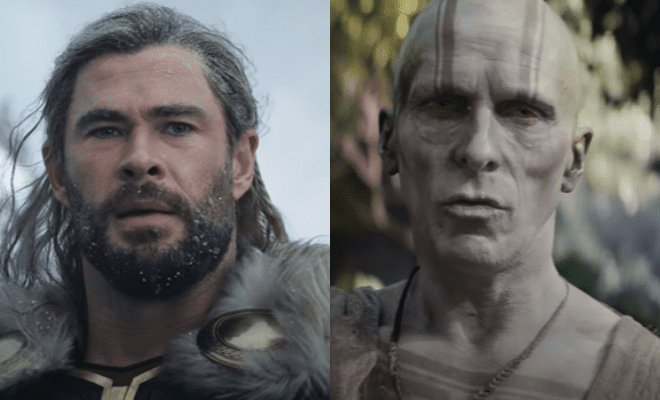 The teaser of Thor: Love And Thunder raised a lot of questions about who the villain will be and Jane Foster wielding Thor’s Mjolnir. The trailer that was released on May 24 fairly answers some of these questions while raising the fans’ expectations tenfold. Thor: Love And Thunder is the fourth film in Marvel’s Thor film franchise. It is directed by Taika Waititi and stars Chris Hemsworth, Natalie Portman, Tessa Thompson, Jaimie Alexander, Russell Crowe and Christian Bale as the villain! Yes, Bale is essaying the role of Gorr the God Butcher who looks extremely scary and villainous. Here’s everything you need to know about the trailer.

The trailer sees Thor going on his zen journey and getting his act together, which means he goes from ‘dad bod to god bod’, and also resumes his role of beating the baddies to the pulp and saving people. He is addressed as the Space Viking and as he goes on to reclaim his title and hold Mjolnir, it gets pulled back and Jane Foster is seen wielding it!

Then enters, Gorr the God Butcher who hates the Gods so much that he wants to wipe each and every one of them from their existence. Thor and Jane team up with the others to face Gorr, meanwhile Thor is in denial about his feelings for her. The trailer itself sees a couple of cute moments between Jane and Thor which are romantic and I would like to see where it leads them to. But nothing tops Christian Bale’s look as Gorr. He looks convincing, invincible, scary and strong!