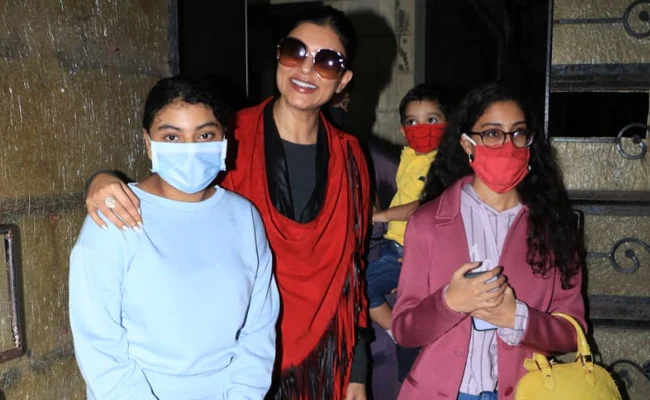 Contrary to what most people want, I am one who either does not want kids or wants to adopt. I have never been able to understand the emphasis society tends to place on marriage and having your own biological children. As if that is supposed to determine my validity as a parent. Moreover, the irony of praising those that are good parents to children that aren’t biologically their own while simultaneously discouraging adoption is priceless to me. Due to this, I have always had a certain admiration for actresses such as Angelina Jolie and Sushmita Sen who went against the norm, adopted and raised beautiful children. And speaking of adoption, there are speculations that Sushmita Sen might have adopted a little boy after a recent video went viral.

In a viral video, Sushmita Sen can be seen stepping out with both her daughters, Renee who was adopted in 2000 and Alisah who was adopted in 2010. She was seen in an all-black casual outfit which she styled with a red shawl. The video was found on paparazzo Viral Bhayani’s Instagram account saying that he’s Sushmita’s son. However, that actress has not confirmed the same.

Also Read: Sushmita Sen And Her Daughters’ Fun Cardio Workout Is The Fitness Inspiration We Need On These Cold Winter Mornings

Sushmita Sen was earlier in the news following her announcement regarding her split with Rohman Shawl after a two-year relationship. Sushmita’s Instagram however shows that she seems to be doing fine. Isn’t that amazing?

Well, if Sushmita Sen has adopted the boy, the cat will soon be out of the bag. And considering how well Sushmita did with Renee and Alisah, I am confident that the young boy will grow up in a loving household. Considering the taboo that revolves around adoption in India, she has gone against the grid and raised 2 children as a single mother with grace and confidence. And as a woman, I look up to that.

Sushmita Sen Opens Up About Her Breakup With Boyfriend Rohman Shawl, Says Closure Is Important