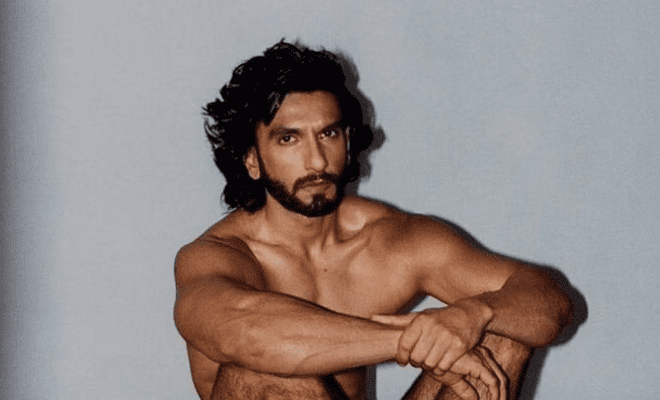 PETA Invites Ranveer Singh To Pose For Them, But He Will Have To Ditch His Pants Again. Is He Up For The Challenge?

As we all know, Ranveer Singh’s nude pictures made quite a buzz on the internet even though it was just like every other celebrity photo shoot for me, to be honest. And I wouldn’t mind if he posts more naked pictures of himself and looks like he is all set to ditch his clothes again and I am not even joking. Recently, PETA invited Ranveer Singh to pose for their new campaign and he will have to appear in the nude PETA India advertisement. Hmm, this sounds very intriguing, right?

After actor Ranveer Singh went vegan for his upcoming film Rocky Aur Rani Ki Prem Kahani and  took the whole nation by storm by posing nude, People for the Ethical Treatment of Animals (PETA) approached him to pose nude for their new ‘Try Vegan’ campaign with the tagline “All Animals Have The Same Parts – Try Vegan.” In the invitation sent to the actor, PETA said that they saw his “head-turning” photoshoot in Paper Magazine while adding that they hope that he will ditch his pants for them too. Well, we wonder if the actor is up for this challenge after the controversy his recent nude shoot stirred.

If the Jayeshbhai Jordaar actor agrees to pose for the campaign, he will join actors, including Anushka Sharma, Kartik Aryan, Joaquin Phoenix, Natalie Portman, and others who have teamed up with the organisation to promote healthy, humane meat-free meals.

Also Read: Kareena Kapoor Khan Chalks Up The “Big Take” Over Ranveer Singh’s Nudes To People Having Too Much Free Time. Correct, Bebo!

It Is Thirstday! This Week, Ranveer Singh And Zayn Malik’s Too Hot-To-Handle Looks Left The Ladies Wanting For More!