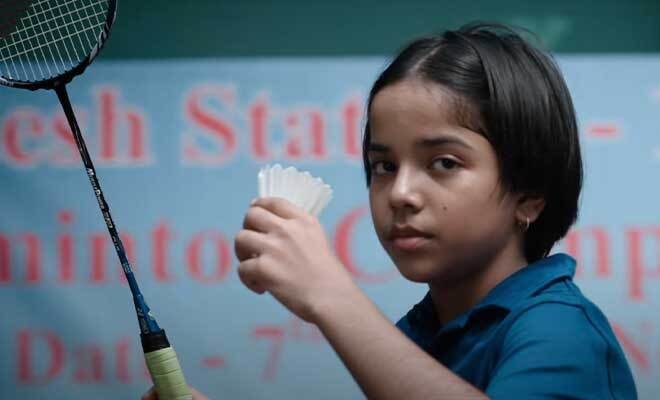 Naishaa Kaur Bhatoye, Who Played Little Saina Nehwal In Biopic, Is A Badminton Star In Real Life Too!

I feel like many may look up to their idols but not be able to get to their calibre or have the same skill set. However, that isn’t the case with Naishaa Kaur Bhatoye who played the young Saina Nehwal in the biopic by Amole Gupte, Saina where Saina was played by Parineeti Chopra. However, she has emulated her onscreen role in her real life and won the U-15 girls singles title, making us all proud!

Gopichand, who is India’s chief national coach said  “She is a good talent and a very gritty athlete, a lot like Saina (Nehwal).” Naishaa attends St Gregorios High School in Chembur and is very grateful to her school that enables and supports her in pursuing her badminton dreams by letting her train in a different city.

In terms of playing little Saina, Naishaa talked about how she got the role, “Initially, when actor Shraddha Kapoor was doing the film, she saw me at the North Indian Association and recommended my name to the director. I was just nine when I shot for the movie. I shot for around one-and-a-half months for the 20-30 minute role. It was a dream come true to play the role of my idol. I took up badminton because of her.”

According to Mid-Day, Naishaa Kaur Bhatoye alternates between Hyderabad (where she trains at Pullela Gopichand Badminton Academy) and Mumbai (where she trains at (Jitesh Padukone Shuttlers’ Academy at the North Indian Association, Sion) for her badminton career. The 13-year-old athlete says that she started training in Mumbai under Coach Jitesh in 2015 when she was 7 and started attending Coach Gopi’s academy around 2 years back.

Naishaa Kaur Bhatoye is a class VIII student who lives in Mumbai with her mother, Sapna and older sister, Jaspreet. Her father Jagir Singh took a job transfer to Hyderabad so that Naishaa can train over there.

P V Sindhu Says She’d Want Deepika Padukone To Play Her In Her Biopic. We Think Her Choice Is Spot On