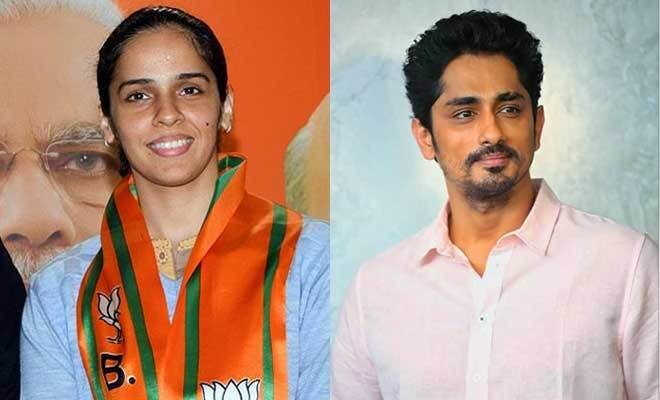 Men have been putting women down for their opinions for a very long time now. After all, an opinionated woman and our sanskaars don’t go hand in hand. And as a woman in our society, voicing your opinions will always put you at the risk of being trolled. I mean, what better way to shut a woman up than to pass cheap and disgusting comments and make fun of her, right? And this isn’t something that happens only with us regular women, even celebs have to face this. And this time around, badminton player Saina Nehwal was the target of sexual innuendo and trolling for showing her support towards PM Narendra Modi and sadly, the man who trolled her is a celebrity himself. Tamil actor Siddharth recently made headlines after he faced severe backlash on social media for a tweet that read rather sexist aimed at the Olympics bronze medalist badminton player.

This man needs a lesson or two. @TwitterIndia why this person's account still exists?..taking it up with Concerned police. https://t.co/qZD2NY5n3X

Soon after this controversy came to light, the Rang De Basanti actor faced heavy criticism from netizens as well as from the National Commission For Women (NCW). NCW Chairperson Rekha Sharma had written to the Maharashtra Police requesting them to register an FIR against the actor for his derogatory comments against badminton player Saina Nehwal. NCW had also urged Twitter to block the actor’s account. And now, Hyderabad Police has booked the actor for passing sexist comments against the player after a woman filed a complaint against him with the Cyber Crime department.

Also Read: Actor Siddharth Writes An Open Letter Apologising To Saina Nehwal For His Sexist Tweet; Says His Intention Was Not To Attack Her As A Woman

According to media reports, an FIR has been registered under sections 509 of the Indian Penal Code and 67 of the Information Technology Act against the Rang De Basanti fame actor. Following an investigation, a notice will be served to Siddharth by the authorities. According to an India Today report, this complaint has been filed by BJP leaders Neelam Bhargava Ram and Prerna T. Earlier, Siddharth had issued a public apology to Saina Nehwal via an open letter posted on Twitter. Terming his joke ‘rude’, the Tamil actor said that while he did not have malicious intent, and that he is a feminist ally himself.

While we do agree that the actor’s comment was rather distasteful but the chaos and row over his crass comments really stinks of political drama. Had it been someone else instead of a politically well-connected woman who also happens to be an international athlete, we would not get the same reactions from people that we’re seeing RN! By no means am I trying to justify Siddharth’s behaviour or his language but being a woman myself, I’d have liked it better if people chose to raise their voice and take swift actions like this in cases of us regular women as well, such as the women that were being auctioned on apps like Bulli Bai and Sulli Deals, or female comics who regularly get abused and trolled on social media for voicing their opinions.