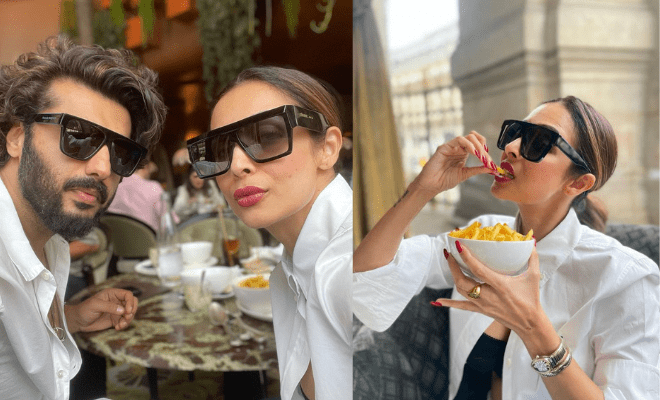 So, a few days ago I celebrated my birthday with my family members and friends and it was a very normal birthday. However, Arjun Kapoor’s birthday was everything but normal, it was amazing, to be honest, and the pictures prove it. Arjun Kapoor turned 37 on Sunday and he celebrated his special day with his special one – Malaika Arora, they had the sweetest birthday brunch in Paris. Hume bhi Paris jana hai but never mind!

Lovebirds Malaika Arora and Arjun Kapoor are currently vacationing in Paris to celebrate the Panipat actor’s birthday. On Sunday, Malaika shared a bunch of pictures from her sweet date with the birthday boy on her social media account. In the pictures, the couple is twinning in white shirts as they are enjoying a special birthday brunch together. Sharing the pictures, she wrote, “Sunday hai aur birthday bhi hai… brunch tho Banta hai (emojis).” For this couple, the love is in the food!

On his birthday, Arjun Kapoor remembered his late mother Mona Shourie Kapoor with a heartfelt note. “Look Maa your son is 37 today & all grown up…I miss you but I know you’re watching over me always & forever (red heart emoji),” he wrote in the caption.

Arjun Kapoor and the Malaika Arora are the coolest couple in B-town and their Parisian date is major GOALS!