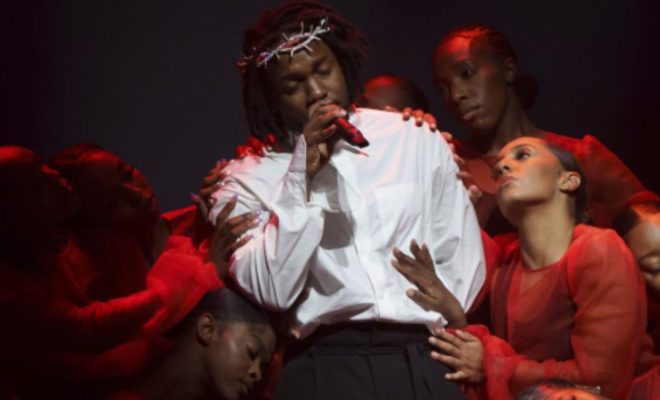 The US Supreme Court recently overturned the Roe V. Wade judgement that gave women abolition rights. This judgement sent shock waves to the world, and many people and celebrities criticised the overruling. It has been considered to be a black day for human rights. Where many celebrities took to their social media accounts to bash this judgement, famous American rapper Kendrick Lamar used his concert stage as the medium to put forth his dissent against the overruling.

The Pulitzer Prize winner Kendrick  Lamar recently performed at the Glastonbury Festival. He wore a crown with thorns that were studded with diamonds. At the end of the concern, Kendrick sang a chant several times which was interpreted to be his way of protest against the overturning of Roe V. Wade and a stand for women’s rights, as per a CNN article. The chant was “They judge you, they judge Christ, Godspeed for women’s rights”. He also randomly exited the stage after chanting the above-line many times. The concert was a very powerful one and the repeated chants at the end made the rapper’s stand on women’s rights impactful.

Going by a Vogue report, the crown that Kendrick wore during the concert was a collaboration between the rapper, his creative collaborator Dave Free, and Tiffany & Co. During the concert fake blood also came down his face and shirt,  making his performance quite an intense one.

It is as if Kendrick Lamar subtly yet very prominently stood for women’s rights and expressed his defiance against the judgement. The overruling of Roe V. Wade has sparked anger among the masses, however, there are many who are also celebrating this.