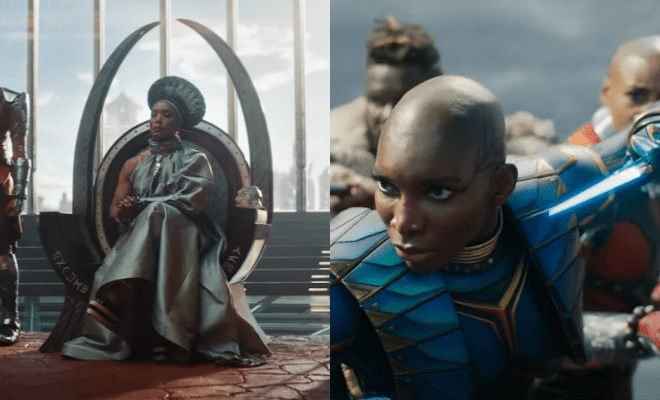 On Saturday, July 23, Ryan Coogler unveiled the first trailer for his next film Black Panther: Wakanda Forever at the San Diego Comic-Con. The preview effectively captures the sadness and heartbreak following the passing of actor Chadwick Boseman, who played the Wakandan hero in the movies. The movie will star After Chad’s passing in 2020, the movie will see the Black Panther make a comeback. He passed away from colon cancer at the age of 43. The fate of his Black Panther series was then uncertain. Ryan, the director, appears to have delivered as the new trailer promises.

The highly anticipated movie, Black Panther: Wakanda Forever, which is slated to hit theatres on November 11, was previewed on-site in San Diego by director Ryan Coogler. It will act as Phase 4’s finale. Fans can see the return of Letitia Wright’s Shuri, Danai Gurira’s Okoye, and Lupita Nyong’o’s Nakia in the teaser, along with new characters, while listening to an emotive performance of ‘No Woman No Cry’ in the backdrop. Namor the Submariner will be portrayed by Tenoch Huerta, who will be joined by Dominique Thorne as Ironheart and Mabel Cadena as Namora.

Queen Ramonda (Angela Bassett), Shuri, M’Baku (Winston Duke), and the Dora Milaje (featuring Florence Kasumba) battle to defend their country from interfering foreign forces in Marvel Studios’ Black Panther: Wakanda Forever. The heroes must work together with the aid of War Dog Nakia and Everett Ross (Martin Freeman) to pave a new course for the kingdom of Wakanda as the Wakandans attempt to embrace their next chapter. Along with Dominique Thorne, Michaela Coel, Mabel Cadena, Alex Livanalli, and Tenoch Huerta, the movie introduces Namor, played by Tenoch Huerta, as the ruler of a clandestine undersea nation.

As the “Queen of the most powerful nation in the world,” Queen Mother Ramonda, played by Angela Bassett, seizes control of the UN. She tells the suit-clad men, “And my entire family is gone.” We see Shuri as well (Letitia Wright). She can be seen presiding over what seems to be a funeral. There are visuals of a child being born underwater and men getting rides on enormous whales to cross the ocean.

On November 11, Black Panther 2 will be released in theatres, capping out Phase 4. At the comic event, Ryan paid homage to Chadwick Boseman. He declared, “The impact he made on our industry will be felt forever.” The sudden death of Chadwick in 2020 presented a difficult challenge for Marvel, as his portrayal of T’Challa in the 2018 film Black Panther is still regarded as one of the MCU’s most nuanced performances.