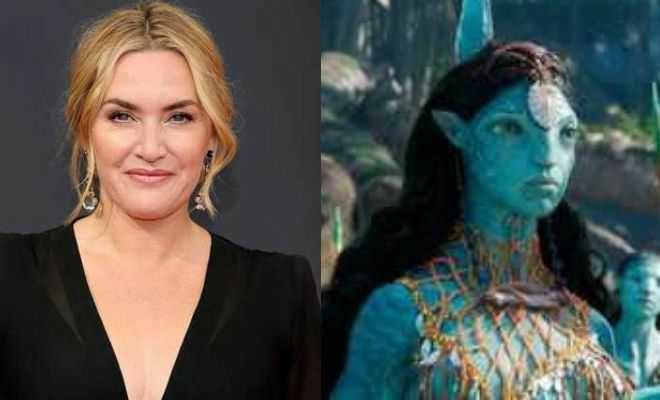 One of the movies that had blown my mind away a couple of years ago was Avatar. It left me awestruck and I really couldn’t get enough of it. So, you can only imagine how excited I got when I heard that a sequel is underway. In fact, my excitement for Avatar 2 grew x10-fold when I learnt that the movie is being directed by James Cameron and Kate Winslet is playing one of the leads. For the longest time, not much was known about her character in Avatar 2 – other than the fact that she was performing some underwater stunts. However, now we know that Kate Winslet is playing a character named Ronal and there are more deets about her.

The makers of Avatar 2 just dropped the first look of Kate Winslet’s character named Ronal and it is all shades of dramatic. The Titanic actress, in a recent interview, even went ahead and revealed a few details about her character and how she managed to bag the role.

Ready to return to Pandora? Empire’s world-exclusive #Avatar: The Way Of Water issue is coming, with Kate Winslet riding into battle as Na’vi leader Ronal on the newsstand cover. On sale Thursday 7 July.

Also Read: Kate Winslet Talks About Her Friendship With Leonardo DiCaprio, Reveals She Cried When They Met After Three Years

Speaking about her character in Avatar 2, Kate Winslet said that Ronal (her character) is the leader of the Metkayina tribe and she resides in the vast oceans of Pandora. Ronal is a “deeply loyal” and a “fearless leader”. The actress added, “She is strong. A warrior. Even in the face of grave danger, and with an unborn baby on board, she still joins her people and fights for what she holds most dear. Her family and their home.”

Kate Winslet then went on to say that she has performed some superhuman stunts for Avatar 2 and one of them is holding her breath underwater for “seven minutes and 14 seconds”. For her, the most amazing thing about being in the movie was learning not just new but superhuman things.

Kate Winslet Reveals She Rejected Airbrushing A Bulgy Belly In ‘Mare Of Easttown’ Sex Scene. Yes To Real Women With Imperfections On Screen!