Durgamati Review: Horror Unintentionally Turns Funny, And The Message Is Lost In Translation. 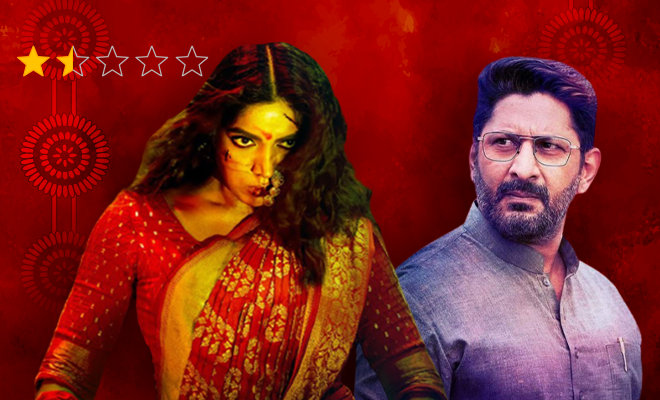 I’ve said this before and Imma say it again. Remakes are a shitty idea, unless the person remaking it is trying to build on the original premise to make it better. Or learning from the mistakes of the original and trying to perfect the second try. When Bollywood remakes South movies, and lately it has been doing that using the original South film’s director, it refuses to do either. We saw this with Laxmii, a remake of the horror Raghava Lawrence’s Kanchana. And we’re seeing the same now that G Ashok has remade his hit Bhaagamathie (starring Anushka Shetty) as Durgamati. The remake stars Bhumi Pednekar, Arshad Warsi, Jissu Sengupta, Mahie Gill and Karan Kapadia.

And the problem with Durgamati is… ah let me tell you in the words of the film itself. “Aapne apni kahaani ko sach maan liya hai isliye aap meri baat sunn nahi rahi hain.” What I mean to say is, the film becomes so self-indulgent and lost in translation that it does a huge disservice to the actors, characters and the message that it intends to send.

The film opens by showing us how a bunch of villagers are planning to leave their village, and scared of uprooting their Gods from their home to take along wherever they go. They’re then attacked one by one, sparing not even the children, by an unseen force. In the real world, where the biggest monsters are our own elected representatives, a plan is being hatched to malign a politician because he seems to be becoming a pain in his own party’s ass.

Minister of Water Resources Ishwar Prasad is a people’s politician with a spotless record. And so, a CBI high ranking officer, Satakshi Ganguly (a Bong who, quite stereotypically, can’t get Hindi gender verbs right) is brought in. She gets the local ACP, Abhay Singh to bring in the incarcerated Chanchal Chauhan, former IAS and Prasad’s former personal secretary of 10 years, for questioning. Since the whole operation has to be done covertly, Chanchal is taken to an abandoned mansion, that everyone, including the cops posted as the security detail, know is haunted. Another thing worth remembering is Chanchal’s crime. She’s in jail for killing her own fiancé, Shakti Singh, who was a good man who fought for the villagers’ rights. Oh, and he was also the ACP’s brother.

As Chanchal is brought in and she tours her new prison, the myth of the haunted Durgamati Haveli, and the life story of the eponymous spirit that haunts it, is slowly revealed to is.

After some spooking and scaring, eventually Chanchal gets possessed. Or does she? And we find out that Ishwar Prasad is a honest man. Or is he? And we also get some lessons in women empowerment, governance, and corruption. Or do we?

Also Read: 5 Thoughts I Had While Watching Durgamati Trailer: Will Bhumi Pednekar Be Able To Recreate The Appeal Of Anushka Shetty’s Bhaagamathie?

Is Durgamati a horror, a comedy or a political thriller?

Horror comedy is a legit genre, and the two best ones, off the top of my head, from Bollywood are Stree and Bhool Bhulaiyya. And in both these movies, you’ll find comedy that isn’t slapstick but very rooted in the everyday, the language, and much like horror, it plays on people’s behaviours and their psyche. They also aren’t marketed as horror, but when the horror is shown in the movie, it at least, gets serious for those bits.

The comedy bits are straight out of those South movies whose Hindi dubbed versions you’d enjoy watching randomly on Set Max. And its horror is not scary but the kind of unintentional comedy that disappoints because it is so out of place. For example, a tantrik being summonsed to dispel a ghost can actually be a comedy scene or something really scary. In Laxmii, I recall this same setup was used twice, once for comedy and once for emotional impact when we get the ghost’s backstory. In Durgamati, the scene is intended to be intense and serious, but just ends up being funny. The same thing happens when Durgamati reveals herself to the two idiotic cops, in full queen regalia. The dialogues, the delivery, the theatrics almost feel like a school poetry recitation or annual day play!

For the sake of being sure, I compared the two scenes of Bhaagamathie and Durgamati. And I suggest you do it too. Because you need to see it to know what I am talking about. Anushka’s haunted queen is fearsome and awe-inspiring. Bhumi’s is not even a shadow of it.

My biggest complaint though is with the extras in this film. I can’t even begin to tell you how confused their performances have made me. They’re getting killed and burnt in a pit. And I am controlling my laughter, because it’s just so bad. Not the situation, the acting.

Why is every actor so darn out of place?

You know, Bhumi Pednekar is a brilliant actor. Watching her in Sonchiriya was such an experience. And now, when I see what Bhaagamathie did for Anushka Shetty but Durgamati couldn’t for Bhumi, I feel disappointed, for her. I can say the same thing for Arshad Warsi and Mahie Gill, both such good actors but relegated to roles that don’t do much for them. I feel particularly bad for Gill, because really the unprofessional mannerisms her Bengali CBI officer has are just frustrating. The fact that she has to do this in front of Jisshu Sengupta, another good actor and a Bengali IRL, made me go through so much second-hand embarrassment for her.

It’s like the actors also don’t know what the movie is supposed to be. Comedy karein ya serious?

We barely know anything about Chanchal’s work ethic or the kind of person she is, except that she is honest. Same with Ishwar Prasad. Shakti’s character is so unreal, I cannot! He’s like a sasta Mohan Bhargava from Swades, but without the brains and patience needed to deal with cunning and corrupt Indian politics. He’s more like a gentle giant, coddling rabbits at one point and beating up goons on the other. Other people have no personality at all.

Did we need so many details if we aren’t going to do anything with it?

The film spends a lot, and I mean A LOT of time setting up the haunted storyline, then the political background, and not enough on the actual people, the characters who we’re supposed to understand to know how they pull off what they do in the movie. This is where a thriller can play its game, embedding subtle clues and clever background information that, when in the climax it all comes together, can make sense. The thing is, the clever, observant movie buff isn’t just happy with finding out who did it, They want to feel the euphoria of that eureka moment, at least a small chance that they figured out what the answer before anyone else. And that seems to be severely lacking here.

I can’t give you the details because spoilers. But there are things like psychological disorders and unexplained loopholes peppered throughout the film. And the film goes to great lengths to establish those details but in the end, nothing comes out of it.

I won’t deny, Durgamati does play well with perception. The audience can be tricked into thinking something and the film succeeds with it on several occasions, but there’s one complaint that still remains….

Did it have to be this lengthy?

All that detailing has the runtime at 2 hours 30 mins, which honestly was not needed at all. We get it, ghosts do spooky things. But this ghost is just so into putting up a show that the actual substance is lost.

What is the message Durgamati is trying to send?

Yes, this is what gets lost into translation. The main question this film poses is whether Durgamati is possessing Chanchal or not. If yes, does this mean the only way to defeat corrupt politicians and social evils is through the supernatural good forces? If so, then the whole message of female empowerment is kinda lost here.

If no, there is no possession, then the whole thing leaves so much to chance. Because for the plan to work, you’d need every single cog in the wheel to work perfectly, as intended. There’s a small but pivotal scene involving the CBI officer and her daughter, for example, which leads to a huge epiphany for her that cracks the case open. And it feels too much of a coincidence to stake all your fortune on child’s play, literally.

The genre is a mess. The morals itself are messed up. So now I am confused what Durgamati is supposed to be intended as.

Does Ashok lose interest in remaking his own film?

Umm yeah, it does feel like that on several occasions. The camera angles are often wonky, even when they don’t need to be. And he tries to recreate the formula that has worked for him before, but he doesn’t account for a few things. Like the fact that the audience is a different one, the actors are also different. And most importantly, he seems to lose interest in it midway and just makes a shell of a film that’s ordinary at best.

Durgamati had promise. Even without seeing or knowing that it is a remake, if you just took the basic story, and put alongside it a list of the actors, you could see there’s potential there. Alas, it was pitted against the original, and those were big shoes to fill. With a little more effort, the film could’ve matched up, but now, it is just remarkably ordinary and forgettable.

Also Read: Bhumi Pednekar Says Audiences Need To Be Okay With Women Doing Heroic Things. But Are We Ready?