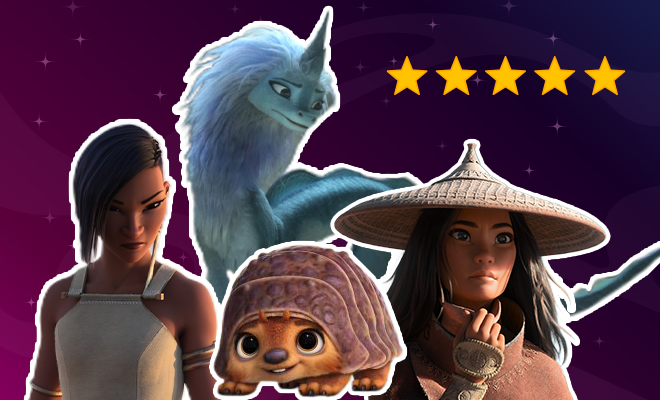 If you have a properly functioning heart and emotions, there’s no way you didn’t get excited when Disney dropped its Raya And The Last Dragon trailer. I mean, all the cool adventure and adorable dragon aside… come on, Kelly Marie Tran, Awkwafina AND Gemma Chan? That’s like my Star Wars, Crazy Rich Asians and Marvel universes colliding to form one beautiful hope…. The hope that this animated wonder would be Disney’s redemption after the live-action Mulan. But of course, Raya, which in the Malay language means ‘celebration’, is more than just redemption or the welcoming of a new Disney Princess. It is indeed a celebration, a first one at that from Disney, of Southeast Asian culture, along with being a kickass story of girl power. And can I say, it does a spectacular job of it!

Raya And The Last Dragon is pretty much a melting pot of diversity itself. Co-directed by Don Hall, Carlos López Estrada, Paul Briggs and John Ripa, it’s got Malaysian-American screenwriter Adele Lim, of Crazy Rich Asians fame, and Vietnamese-American playwright and screenwriter Qui Nguyen as writers, and Thai artist Fawn Veerasunthorn as its head of story.

While Kelly Marie Tran does become the first Southeast Asian actor to headline a Disney film, the rest of it’s voice cast, which includes Awkwafina, Gemma Chan, Daniel Dae Kim, Sandra Oh, Benedict Wong, Izaac Wang, Thalia Tran, Alan Tudyk, Lucille Soong, Patti Harrison and Ross Butler and others, is an incredible mix of Asian, American and British actors, who actually recorded from their own homes for this film!

And finally, there’s also a beautiful amalgamation of themes, if you will. There’s the very obvious one of how it is only through unity and trust in each other that human beings can save this world from a terrible fate. But there’s also a smooth integration of themes like family, a sense of pride for one’s culture, not judging people from their appearances, the environment being destroyed by man’s greed and, I’d very much like to think, some subtle queer coding too.

Might I add, once more with feeling, the film has dragons. Like, fun, rainbow-coloured ones. Really, what’s not to love?

But let’s talk about what’s to love, shall we?

Raya And The Last Dragon takes place in the fantastical world of Kumandra, where some 500 years ago, humans and dragons lived in harmony. However, the dragons sacrificed themselves in an attempt to hold back a powerful evil force that threatened to destroy Kumandra. One last dragon, Sisu, became immortalised for how she had defeated the destructive force, called Drunn, with a dragon gem. However, while her sacrifice saved Kumandra, its people divided it into five parts for each of the five tribes.

Now 500, years later, Raya has set out on a journey to find Sisu so she can breathe life back into what was destroyed in her childhood, and perhaps, restore Kumandra to its former unified state. But of course, it is going to take a lot more than one dragon to save the world. The story isn’t exactly novel, but what makes Raya this epic adventure is that every cog in its wheel functions perfectly to make this an enjoyable film at every step.

The character design and development are amazing, and a talented voice cast helps in making an instant connect

OMG, Awkwafina as Sisu the dragon is EVERYTHING! And there’s no way you don’t fall in love with her the moment she takes corporeal form. The dragon IS Awkwafina IS the dragon, and nobody else could’ve voiced her! Now I know that ‘cute’ and ‘dorky’ are rarely the words you want to associate with dragons in a post Game of Thrones world, but that’s just the beginning of Sisu’s incredible transformation. Sisu, to me, felt like a Pokémon, who starts out being this funny, adorkable little thing you’ve to protect from danger every second, but eventually, she evolves into this Mewtwo-like sentient being who will actually help your lost self find the right way.

A similar transition lies in store for Raya, our heroine, who seems like the run-of-the- mill saviour of her people, and Namari, another badass warrior princess with high stakes in the game. I can’t exactly explain it, but I loved the way these women felt quite real, and even held themselves differently, if that’s even possible to say about animated characters? Dragons, in most cultures symbolise transformation and a mastery over elements, and I thought these two women also evolved over the course of the film, lending their characters pretty sensible and satisfactory arcs.

The character design definitely look amazing, and there’s no way you’re not going to want to pull the Con Baby’s cheeks, keep listening to Boun (a wondrous Izaac Wang), hug Tong or desperately want a Tuk Tuk (Alan Tudyk) of your own for your Secret Santa gift this year. When Benja (Daniel Dae Kim) talks, his voice, a mixture of fatherly warmth and calm leadership, instantly puts you to rest. When Raya and Namari spar verbally, you can feel that rivalry (and other feelings of the unrequited kind?) that they’ve been nursing for years. I felt for these characters, their existing and developing bonds with each other, and how they reach from one point to another in their arcs while they’re physically journeying from one part of Kumandra to another.

While I am especially curious about the possible queercoding of Raya and Namari (Gemma Chan), I think the relationship between Raya and Sisu deserves even more exploration. We’ve seen such relationships between mythical creatures of wisdom and humans (Aslan and the Pevensie kids in Narnia, etc.) but I dig the cool, casual and fun ‘Hey girl friend!’ vibe that Raya and Sisu shared, made possible by Kelly Marie Tran and Awkwafina’s articulate voice acting and some very organic dialogues between them and the rest of the characters.

I think a lot of my favourite scenes in Raya And The Last Dragon involve water and food, including the end credits! As a fellow Asian, I cannot even begin to emphasize how important food is when it comes to connecting people and showing hospitality. In fact, eating food together is a way of establishing trust, and sharing in one’s gains. And I love that the writers quite intuitively integrated that into the story. Even the ingredients seemed specific to traditional Asian recipes, and looked appetising enough to make me want to try some.

Turns out, the team working on the film took major visual inspiration not just in terms of culture but also in terms of designing how the five tribes would look, dress and be different from each other. Everything, from the terrains in the different parts of land they inhabited to the way they built their homes and the weapons they used, felt well thought of and authentic. I might go as far as saying it reminded me so much of Game of Thrones and how its Seven Kingdoms were differentiated. The Fangs could easily have been Dorne, and there’s no way you don’t think of Indira Verma’s Ellaria Sand and the Sand Snakes when you look at Namari and her Fang chief mother, Virana! The Spine folk could easily be Wildlings, barbaric only in appearance but warm, fuzzy and loyal on the inside!

The Raya team reportedly was inspired by countries like Laos, Indonesia, Thailand, Vietnam, Cambodia, Malaysia, Singapore and the Philippines, and also travelled to some of them to get a better idea of the culture and regions. And I think it all definitely shows.

Also Read: Mulan Review: Disney Live Action Is Beautiful To Look At. But Where’s The Charm And Humour?

Raya And The Last Dragon is easily one of the most best animated films I’ve seen, especially when the dragons do their thing!

When I saw Disney Pixar’s Soul, I was pretty much blown away, not just by just how well they had represented black culture, but also by how beautiful and real the world of Soul looked. From the city life to the barbershop, to ‘The Zone’ and of course, the simple scene of a musician playing a jazz piano. It was surreal how real it looked.

And now with Raya And The Last Dragon, Disney ups its game higher by creating a vibrant world that sometimes makes you forget it’s animation, and sometimes reminds you just why we need animation to bring such incredulous concepts to life. Again, it is the sequences involving dragons and water that do it for me, but I’d pay special attention to the fight sequences, which are equally brilliant. The original score by James Newton Howard is also fun, and complements the film well.

The film comes with a very well-timed message for humans, with its Dragon and Drunn symbolism

In Asian cultures, dragons symbolise a wide range of things, but usually power, prosperity, fertility and happiness. And with Raya And The Last Dragon, the ‘last dragon’ does symbolise mankind’s last chance to save the fragmented world it inhabits, from its own greed and mistrust. There’s probably a reason why the Drunn leaves its victims with their hands spread out, as if praying or asking for something, or perhaps it is to show us that when out time comes, we’ll be left with nothing but empty hands. So why fight to amass all this wealth and materialistic things and lose what’s really important in the process? Family, unity, honour, trust.

Raya And The Last Dragon reminded me a lot of The Guardians of the Galaxy and The Lord of The Rings (especially Tong’s ‘Fellowship of Butt-kickery’ dialogue!) It brought a bunch of extremely different people (and creatures) together, unexpectedly, in search of a McGuffin, and when the moment came, it took their combined strengths and faith in each other to defeat the bad guy. And since we are talking about symbolisms and allegories, these films did have undertones of similar themes like environmentalism trust, faith, fellowship and a very clear indication that the time to expect a magical solution to problems we’ve created is over. The Age of Men has begun. In fact, this is what makes me hope we get to see Raya and friends unite to do some more interesting things in and around Kumandra, because that would be so much fun!

Raya And The Last Dragon is a film of many firsts, and I think it definitely comes through. The film made me cheer for Raya & Co., enjoy their banter and even cry at one point, because isn’t that what well-made Disney movies are supposed to do? I know one criticism against the film would be its over-cute-fication, but hey, the message it set out to deliver, it delivers without any impediment, and to every age group and gender. So let the cuteness be, please. We’re having fun here.

I think this is easily one of my favourite films that doesn’t just fulfil but also exceeds expectations in how enjoyable it can be. I abso-total-utely recommend you watch it and welcome our newest Disney Princess with all your heart, and trust her to take you on this vibrant and fun adventure, on her Tuk Tuk!

Disney’s Raya And The Last Dragon releases theatrically on March 5, 2020.

EXCLUSIVE! Editor Antara Lahiri On The Craft Of Film Editing, Women In Bollywood And The One Thing We Need To Stop Blaming Editors For