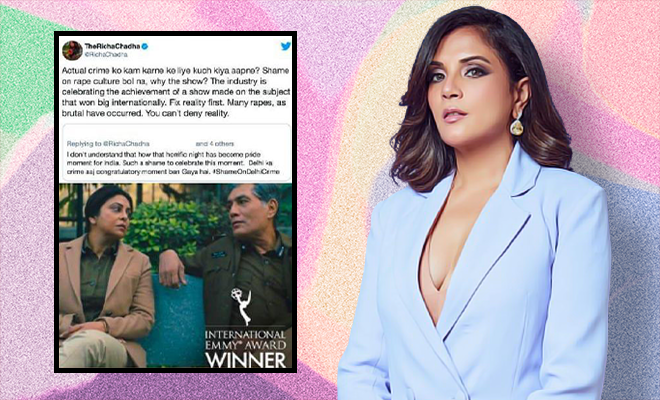 The irony that India, known for its brutal disregard for women’s safety, should win its first ever Emmy award for a web series based on one of its most gruesome crimes against a woman is not lost on anyone. It is, after all, how a majority of the world sees us, isn’t it? It’s almost the same feeling when Slumdog Millionaire won at the Oscars. But here’s a stark difference between the two. While Slumdog felt like a patronising glance at what India was, and its win felt like a triumph of the very dismissive view that the West has of India’s impoverished, Delhi Crime is nothing like that. The series, by Richie Mehta, fuelled by moving, gritty performances of Shefali Shah and the rest of the cast, isn’t an outsider’s perspective but an insider’s belief that India has the power to reverse its problematic rape culture and bring forth justice with the right mindset.

My instantaneous reaction to Delhi Crime winning the International Emmy Award for Best Drama Series was ecstatic, of course. But once that settled, I had this feeling that at least one person would ‘take offence’. One thing that you have to give social media credit for is that it has encouraged people to have opinions, different from the throng, and given then a platform to voice those opinions. Today, if you don’t like what the general consensus is, or are not sure if what you think is a plausible thought, all you need to do is go online, speak your mind, and you’ll find ten others who second you, no matter how vile or disruptive your thought is.

However, as with all other evils of social media, born out of excessiveness, extremism and the colossal need for some humans to ‘do keede’ when they see something pure and good happening, there’s a side-effect to this as well.

Basically, some people just can’t take the right message from something.

Take this one Twitter user, for example, who proved my intuition right and criticised the country celebrating Delhi Crime winning the Emmy. Something tells me, he’s the guy who thinks if there’s a death in the family, anybody who dares to crack a smile is not sad. And if anyone celebrates a show that dares to openly talk about the defects in the way India deals with rape cases, then they’re actually anti-national, or celebrating the rape itself.

I don't understand that how that horrific night has become pride moment for India. Such a shame to celebrate this moment. Delhi ka crime aaj congratulatory moment ban Gaya hai. #ShameOnDelhiCrime

Actual crime ko kam karne ke liye kuch kiya aapne? Shame on rape culture bol na, why the show? The industry is celebrating the achievement of a show made on the subject that won big internationally. Fix reality first. Many rapes, as brutal have occurred. You can’t deny reality. https://t.co/Ag8qKiOeqp

Touché, Richa. Touché. Pehle toh, this statement is janhit mein jaari—This inability of our people to see beyond their false pride and honour is what has caused majority of our country’s problems. Also, dude needs to get his facts straight. The horrific night is not a celebratory moment; the show, Delhi Crime, that tackles how that night was dealt with, how we as a country came together to outrage against it, and that story getting recognised is what is being celebrated here. Think of American shows like Mindhunter, Criminal Minds, American Crime Story (People v. OJ Simpson) all of which show the ugly faces of criminals that the country’s very system, their very culture fostered. Some of them eluded the law enforcement for so long, it was an outright embarrassment for the nation itself. Even Bad Boy Billionaires, for that matter, shows just how messed up our system is that we let scamsters play on for so long and then escape. So does that mean we stop making these shows? Hide our truths? Not celebrate if they win acclaim or awards?

The Nirbhaya incident was beyond horrific. But what it did to shake us out of our stupor is something that should not be forgotten. Besides, as Richa Chadha points out, if you want a different reality to be celebrated, then you change the current one that you’re uncomfortable with. Don’t throw a hissy fit over your half-assed concern.

A few more people also decided to explain why a show that portrays the reality must not be shirked away from but seen by more and more people to grasp the truth.

Ya exactly, the show is just accurately reflecting the current condition of the state. What's wrong in showing the truth. That's the only way things will get better, if people are aware of the truth about woman safety in Delhi.

Unfortunately, some people just do not want to see the light.

Me and You are standing on the same side while fighting this rape culture. Don't you think Richa getting fame on account of an horrific crime is a shame. Believe it or not #ShameOnDelhiCrime. Tum samajhdar ho shayad samajh aaye Maine Kya likha hai.

Look here, the Delhi gangrape case did change things for women in India. It can be hard to see right now, because more brutal rape cases have followed and the crime rates don’t seem to be slowing down. On the contrary, it feels like we as a country are regressing further down the murky hole from whence our women were trying to climb up and into the light. And that is precisely why we need more shows like Delhi Crime. Shows and movies that make you uncomfortable, don’t let you sleep at night. If there’s fear, then good. Because nothing else seems to be working as a deterrent, is it?

India currently is a country so much in denial of its wrongs and problematic cultures. But if there’s anything, anything at all that holds up a mirror to this, then I say, give it all the awards.

Richa Chadha Feels Sorry For The ‘Loveless People’ Who Bashed The Tanishq’s Interfaith Commercial, Says Her Life Is Like That Ad.