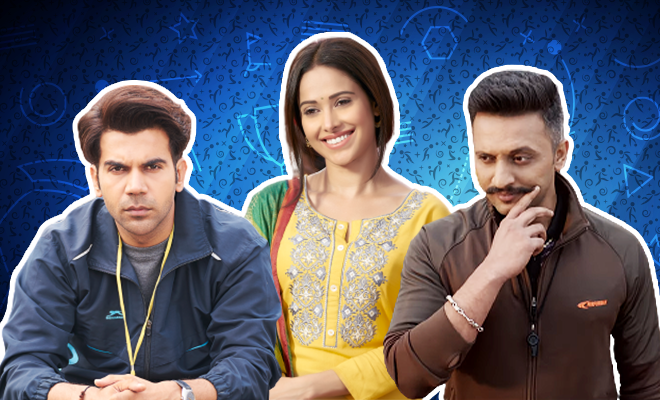 Chhalaang Review: No New Lessons, But A Nice Revision Of Taking The Leap And Not Giving Up

Recently, Dilip Joshi aka Jethalal from Taarak Mehta Ka Ooltah Chashma said something about there not being enough movies and shows that families can sit together and watch. For the most part, I think that’s a very silly complaint to have, especially when our Indian OTT content is making chhalaangs of its own. But he might be super happy with Amazon Prime Video’s new release. Chhalaang, directed by Hansal Mehta and starring Rajkummar Rao, Nushrratt Bharuccha, Zeeshan Ayyub, Saurabh Shukla, Satish Kaushik, Ila Arun and Jatin Sarna. It’s an easy-breezy, slice-of-life film that makes the leap from a romantic comedy to a sports film. It doesn’t really have any new lessons to offer or blow your mind. But it’s a nice revision of some basic lessons like never giving up, how to keep competition healthy, and how important teachers are, and how often we can learn from the ones we least expect.

Chhalaang is written by Luv Ranjan, Zeishan Quadri and Aseem Arrora, and produced by Luv Ranjan, Ajay Devgn and Ankur Garg. It marks the sixth collaboration between Hansal Mehta and Rajkummar Rao, and Rao’s second time acting with Zeeshan Ayyub (they played brothers in Hansal Mehta’s Shahid) and Nushrratt Bharuccha (Love Sex Aur Dhoka). The music is by Hitesh Sonik, Guru Randhawa, Yo Yo Honey Singh, and Vishal-Shekhar (credited for ‘Deedar De’ Remix).

Mahendra ‘Montu’ Singh Hooda (Rajkummar Rao) is a Physical Training Instructor (PTI) in a small-town Haryana school that he studied in. His grandfather was a reputed lawyer and so is his father (Satish Kaushik), on whose recommendation, Montu gets this job. You could say he’s a spoilt brat within his aukaat—he doesn’t teach his kids but instead runs errands for his boss, the school principal Usha Devi (Ila Arun), who pays him commission. His BFFs-cum-drinking buds are his fellow veteran teacher Shukla (Saurabh Shukla) and the local halwaai’s son (Jatin Sarna). Montu’s mother keeps nagging him to get married, while his father seems like a believer of the ‘Live and Let Live’ school of thought.

Montu’s lazy, sloth-like existence going completely fine, until Neelima aka ’Neelu’ (Nushrratt Bharuccha) enters the school as the Computer teacher and corrupts the hard disk of his life. He falls for her, but clearly, she’s way out of his league. Not just because she looks bomb AF, but because she takes teaching seriously whereas our PT master is practically good-for-nothing. Things get worse for Montu when the principal announces that they’re getting a new PT coach, I.M. Singh (Zeeshan Ayyub). Formally trained in sports, dapper looking, and appointed as Montu’s senior, he steps hard on Montu’s fragile male ego.

But when he becomes a threat to his happily ever after with Neelu, Montu’s forced to take stock of his life, and set a challenge that he’ll have to slog his ass to win. Little does he know, it’s all about making the leap of faith in oneself.

I watched Chhalaang with my mother, and it made for a far better viewing than a few nights ago’s Laxmii. The film is funny, like most such small-town slice-of-life movies are. Think Amazon Prime Video’s series, Panchayat, or a Stree and you’ll get what I am talking about.

Chhalang’s humour is actually what keeps the first half of the film going. The dialogues aren’t memorable or heavy, but do make you laugh enough to keep you entertained. The serious ones, like when Montu is being told what a teacher means or when the winner of the competition delivers a short monologue about the importance of sports, healthy competition, and the role parents play in helping their children rise up thankfully don’t feel preachy or long-drawn. And that can happen. The film isn’t taking itself too seriously and that really works for it.

In fact, I love how the competition suddenly becomes this noble thing about the kids’ not just excelling in academics but playing sports too. You think, “Wait a minute! Are we completely ignoring that this is just a pissing contest between two guys to prove that they’re the better man?” I think at some point, one of the kids’ parents also complains about how the kids are just caught between these two teachers’ animosity. But by then, the film has shifted gears from a love triangle to a sports movie triangle of Chak De-meets-Chhichhore-meets-Lagaan, and you want the underdogs to win so you don’t care how it all began.

It’s a very predictable path. Montu ke andar ka teacher once woken up, and is relentless. And even though he doesn’t have the academic knowledge or experience, he is jugaadu and will figure out a way. These teaching jugaads are again fun to watch, but nothing novel.

The cast is made up of such proven actors in the genre that I had no doubts they’d play their parts with ease. There are no breakthrough performances or monologue acts that’ll move you. To put it in terms of the film, the isn’t your top karrne wali student. It’s more of a comfortable 70%-80% scoring student who’s happy with what they get, not being a part of the rat race.

Only 1 day to go! Whose side are you on, Montu sir or Singh sir ? #ChhalaangOnPrime premieres this Diwali, Nov 13 on @primevideoin.

Rajkummar Rao leads the charge with his ‘smitten’ aashiq-turned-determined teacher act. These kind of movies are pretty much his forte, and I think he’s most adorable when he’s playing the blushing lover. He’s followed by Shukla ji’s zen Masterji, his usual subtle humour on point, and Jatin Sarna being Jatin Sarna! Satish Kaushik also gets his turn but much later during the movie, and it’s this very sweet, typical desi dad brand of humour that suits his character well. He has this team-up moment with another character that’s a pleasant sequence to watch. The remaining funny moments come from the interaction between Montu Sir and his students as he trains them to win this ‘Student Of The Year’ kind go triathlon. Except, it’s a contest for ‘Teacher of the year’ here. Nushrrat Bharuccha as Neelu looks beautiful, simple, elegant and plays her bit as Montu’s inspiration well.

What ‘leaped’ out at us

We’ve often heard that women shouldn’t be rehabilitation centres for men. And it’s a 100% correct. But love, or the fear of losing love, can in many ways transform a person and give them the much needed jolt to change themselves. When we were in school, we knew exactly what we loved and wanted to do. For some, it was studying, for others it was the pursuit of a hobby like writing, painting, playing a sport, or even something as fantastical as becoming a movie star. And we believed that we could do it. But adulting is such a sux, and it comes with so many expectations to turn these loves and passions into jobs that should pay bills, that we lose the very joy of why we loved doing these things in the first place.

We let it go, and we let it die. And it stays dead until someone challenges us to revive it. And that competition, if healthy, has the power to teach us to fight for our dreams again.

Chhalaang, you could say, is Montu’s coming-of-age story that somewhat reminds me of Shah Rukh Khan’s Kabhi Haan Kabhi Na. Everyone underestimates Montu, from his principal to his own father, who tells him to drop whatever he feels he can’t do. Even his own friends have accepted him the way he is, and there’s zero motivation to get out of that comfortable rut.

But when Neelu enters his life, she challenges all that. She makes him drink out in the open with her, address his insecurities, even makes him realise that his toxic masculinity is problematic and that his lack of ambition or even dedication in the job he has is an issue. I appreciated that Neelu’s character was very clear about her feelings for Montu and she conveyed them to him. She likes him, but he hasn’t yet done anything to transform those feelings into love or respect him. For a lot of women, these two feelings are mutually inclusive, especially for someone as strong-minded as Neelu. She doesn’t give up on Montu, but she doesn’t drop him like a hot cake either or overextend herself to accommodate his feelings. She remains a friend, and a teacher who he can learn to be a better teacher himself from.

I also thought the ending, though predictable, came with some nice lessons on parenting, not underestimating girl power and sportsmanship. The gender equality bit could be seen as token, but since it is a small-town story, I’m gonna let it slide and hope the messaging seeps in. Zeeshan Ayyub as I.M. Singh got some good lines to say here, and so did Rajkummar Rao as Montu. Again, so glad they wren’t preachy because it would be going against the grain of being this light-hearted film that it is.

The best part about the ending was ‘Care Ni Karda’. No seriously, I’ve actually grown fond of that song, its lyrics and Nushrratt Bharuccha (she’s lovely in this one!) and Rajkummar Rao looking super cute in it. It’s way better than ‘Deedar De’ which seems even more unnecessary now that I’ve seen the film. And I would like to personally thank Hansal Mehta sir for not inserting songs in the middle of the film to break the flow. Best decision.

Also Read: 5 Thoughts We Had About Deedar De Remix From Chhalaang. Mainly, Why Are We Still Doing Heaving Bosoms In 2020?

The film’s run-time is a little over 2 hours+ and I thought it languished a bit too much in the start on establishing Montu’s easy-going small-town life. Could’ve used a trim there. The whole little brother’s romance (you’ll see) angle felt unnecessary. I also think Montu’s team comprising entirely of underdogs was a bit too much. It would’ve been nice if the competition was equal. Furthermore, I thought Nushrratt’s Haryanvi accent was a bit off? I’m not too sure because it didn’t exactly bother me so much, but the first few moments hit weird.

Chhalaang doesn’t pretend to offer any remarkable lessons, or be extraordinary and it’s a good thing. I knew exactly what to expect from the movie when going in, and that’s why I could enjoy it all the way. That doesn’t mean there aren’t plenty of familiar lessons being revised in a fun and easy manner. Most importantly, to not give up in the face of adversity. Montu gives up a lot because he thinks he cannot win, so what’s the point? But failure can also be a lesson. Only, if you give up, you’ll never even get that failure, will you?

Look, it’s the Diwali long weekend, and you probably want have something fun to watch with your folks. And Chhalaang is just perfect for that. It’s a Rajkummar Rao movie so you can, how do you say, take the leap of faith blindly. Director Hansal Mehta talked about how the film was a nice break for him after directing heavy content like his massively acclaimed Scam 1992. And just like that, it’s a break for us too, especially if like me, you’ve been watching Mirzapur 2, The Queen’s Gambit or are prepping for The Crown Season 4 that drops in a few days.

Toh thoda chill maro, get some jalebi fafda, and watch Chhalaang to have a fun time with the fam, just like Jethabhai would’ve wanted.