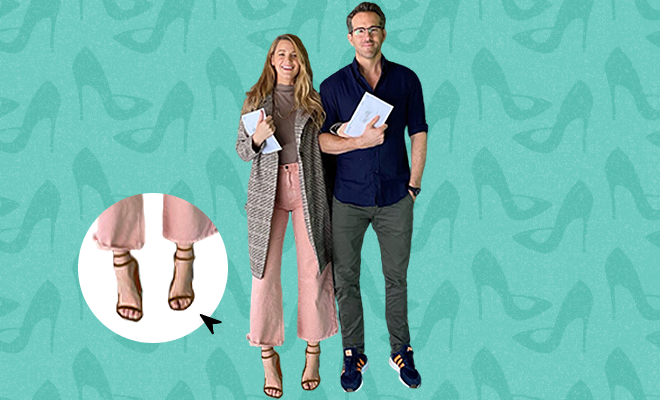 Blake Lively Forgot Her Shoes When She Went To Vote With Ryan Reynolds. So She Just Doodled Them On!

I have a lot of celebrity couples on my #CoupleGoals list—John Legend and Chrissy Teigen, John Krasinski and Emily Blunt, Jensen Ackles and Daneel Ackles… the list goes on. But somewhere on the top are Ryan Reynolds and Blake Lively. Individually, their sense of humour is pretty hilarious. But together, they’re a riot! I aspire to that playful sass and savageness with my future husband. It’s okay if he doesn’t look like Ryan, because I’m no Blake. But my witty banter game is strong so he better bring his A game! Anyhoo, Blake and Ryan did something rather funny once again. I don’t know if it was their whole pranking thing, but it clearly got everyone talking. Apparently, Blake Lively couldn’t be bothered to put some footwear on so she doodled them on!

ICYMI, the presidential elections are going on in the United States, and a lot of celebs are vociferously advocating voting to get POTUS Donald Trump out. (Yep, the same guy who called India ‘filthy’ in his speech at the final presidential debate this morning.) Now, as you know, Ryan Reynolds is Canadian, and this election was his first time voting in the United States. Naturally, the couple was super excited to vote. And once they were done, Reynolds posted a picture of them both with a lot of ‘my first time’ innuendos in the caption! Classic Ryan Reynolds / Deadpool!

The picture was rather adorable. Bespectacled Ryan Reynolds is always a treat for the eyes. But it was Blake Lively, dressed in these cute pink pants and a checkered grey coat, standing on her tippy toes to match Ryan’s height that did the trick! Oh, also, she was barefoot.

Blake Lively also posted the same picture on her Instagram.  Even she made some hilarious jokes about her husband’s ‘first time’ getting over really fast. And that’s when fans noticed something different. Her feet weren’t naked in this one; she had tan strappy heels on. Naturally, deep scrutiny was done, and fans realised that Blake had actually doodled shoes on her feet! What’s more, she tagged Louboutin on the picture where her shoes were!

Blake even posted the another shoe design doodle on her Instagram, asking if Louboutin would hire her as an intern for her shoe doodling skills! I totally think they should because would you look at the attention to detail? She even drew on the red sole at the bottom which is the Louboutin trademark!

Her fans thought it was rather funny and couldn’t believe she actually did that!

Someone please tell me I’m not crazy and that Blake Lively actually photoshopped a pair of heels on her feet for her photo pic.twitter.com/Wiwprqe0y3

why did blake lively draw on shoes😭😭😭 pic.twitter.com/okc65h29gW

and she tagged louboutin??? i feel crazy

Blake Lively is so many goals, I can’t even!

It’s Ryan Reynolds’ birthday today, so I am already expecting some cheeky, sassy birthday prank from Blake coming soon, as is their tradition!

Also Read: Little Girl Giving A High Five To A Priest Goes Viral. Bless Her, This Is The Level Of Cool I Aspire To Be!