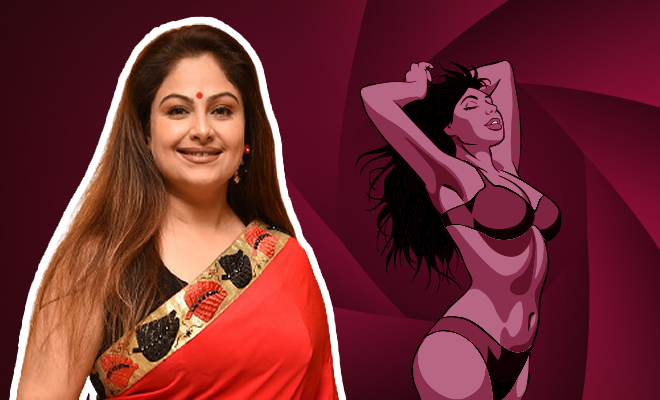 Ayesha Jhulka Turned Down A Role Because She Was Asked To Wear A Bikini. Bikini-Clad Women In Films Raised Eyebrows For A Long Time

Bollywood and bikinis have always had a love-hate relationship. Although it falls more on the love side of the spectrum today and are considered to be a sartorial norm just as sarees (I mean, there is a bikini saree by designer label Shivan and Narresh), it wasn’t always the case. While the glamorously revealing outfit pleased a section of audience, the other section questioned the morality of women wearing it and accuses the clothing of tarnishing the Indian culture. Bikinis have a long history of offending the Indian audiences which always posed a serious dilemma for the actresses.

In a recent interview with Times of India, 90s popular actress Ayesha Jhulka confessed to have turned down a role in Rama Naidu’s Prem Qaidi (which later went to Karisma Kapoor) because she was supposed to be introduced in a bikini. While that could be completely her personal choice to not appear in the two-piece onscreen, a lot of actresses did hesitate to wear a bikini fearing what the audience would think of them. The society perceived women wearing swimwear as non-sanskari back in the day which probably was the reason why you won’t find a lot of female protagonists sporting a bikini in the older movies especially if they are attempting to display the character to be a coy girl-next-door. Female antagonist on the other hand? Sure!

Also Read: Bollywood Celebrities Are Holidaying In Maldives And It’s Their Beachwear Looks That Are Making Quite A Splash.

Not just Ayesha Jhulka, wearing bikini onscreen was always a Sophie’s choice for actresses especially in the 70s and 80s when the female lead was more often than not a stereotypical Indian woman whose wardrobe consisted of silk sarees, dupattas capable of flying in the air and bangles for jingling on her wrists that would demonstrate her Indianness and instantly arouse the hero and the bad guy alike. The bikini made a debut in Bollywood in the 60s when Sharmila Tagore wore a two piece swimsuit for her movie Evening in Paris and later a bikini for a magazine shoot. The bold move was met with heated debate and controversies but it marked a moment in Bollywood that changed the course of history for Indian women and fashion in movies in the time to come.

After the iconic and buzz-creating bikini scene served by Tagore, more actresses followed suit and unabashedly rocked bikinis onscreen. Dimple Kapadia, Parveen Babi and Zeenat Aman are the names that come to mind. It was somewhere in the 90s that bikinis became an acceptable attire (still not deemed fit for a sanskaari girl) and the list of bikini-clad actresses grew longer, normalising the style further. However, at this time, actresses like Juhi Chawla in Darr and Kajol for a couple of minutes in DDLJ wore a one-piece swimwear or monokinis which weren’t too revealing but served the purpose of showing them as modern Indian women.

Cut to today, actresses don’t shy away from wearing the two-piece outfit and in fact own it on the silver screen. We have had some cool bikini moments in the past decade which created quite a rage (think Priyanka’s gold swimsuit in Dostana and Kareena Kapoor’s green bikini in Tashan) and bikinis became the rite of passage in Bollywood. These bikini scenes made us gasp but for completely different reasons—we wanted those pieces for us, honestly, because look, how gorgeous! Although the young stars like Sara Ali Khan and Taapsee Pannu have been trolled and attacked online by the moral police for posting their biggini shoot on social media (some people don’t change), the skimpy outfit remains to be a head turner in Bollywood even today.

Also Read: Bikini Clad Women Always Outrage Society. Why Do We Feel The Need To Police What Women Wear?