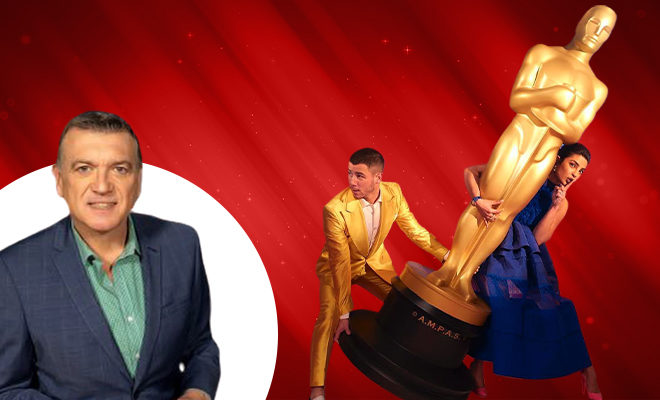 I’ve been attending the ongoing SXSW Film Festival virtually, and I watched film called Hysterical which, to put it very simplistically, is a documentary about the challenges faced by female comedians and how these queens persist through it all. And one of the biggest issues that got reaffirmed with their stories is that there are always going to be artists who just love to put down other artists to nurse their own insecurities. Especially, if that artist is a woman. She can’t do this. She isn Now I am not sure what issues plague Australian entertainment journalist Peter Ford, but they better be good because why else would he try and call Nick Jonas and Priyanka Chopra Jonas ‘unqualified’ to present the Oscars 2021 nominations?

On Monday, March 15, the global star, producer and former Miss World and the Jonas Brother crooner, who are also the ultimate entertainment power couple, presented the nominations for the 93rd Academy Awards. While I’ll be honest, I expected a little more fun banter or moments happening between the two, because couple presenters, it was still quite the honour. PeeCee became the first Indian to present the Oscar Noms announcement and I thought she did a splendid job at it.

It’s all good and everyone’s basically just talking about how Chloé Zhao and Emerald Fennell’s nomination in Best Director category is Oscars history. Or how excited they are by Viola Davis and all of the Minari nominations. Even the heated discussions of the surprises (like Lakeith Stanfield in the Supporting Actor category for Judas And The Black Messiah or Aaron Sorkin not getting one for screenwriting for Trial Of The Chicago 7) and the snubs (Tenet) were going well. And then Australian entertainment journalist Peter Ford enters the chat with his unwarranted, perhaps sexist(?) tweet.

Erm, qualified? It is an Oscars nomination announcement. They aren’t the Chief Guests or aren’t being handed the golden statuette for their services. Why does one need to be qualified to be a presenter? I mean, both Priyanka Chopra and Nick Jonas speak impeccable English, and got each and every one of those names right, so even that base is covered. What other qualifications is this dude talking about?

Professionally, too, the power couple are as talented together as they are individually in their respective fields. We already know that Nick Jonas is part of Jonas Brothers, who are insanely popular their songs top US Billboard charts. He is also an actor and an entrepreneur. Priyanka Chopra too has had an international album release. She is a former Miss World, a philanthropist and UN Ambassador, a National Award-winning Bollywood actor and a bona fide Hollywood star too. She’s going to be in a Matrix film, does it get bigger than that?

And above everything, she is also a producer and her film, The White Tiger, which she also starred in, is nominated for Best Adapted Screenplay at the Oscars this year.

I still don’t see what could’ve possessed Peter Ford to tweet this at all. I mean, would he like no one less than Meryl Streep and Amitabh Bachchan to do the honours? Wouldn’t they be too overqualified in his opinion then? Also, I can’t help but feel the jibe was meant more towards Priyanka Chopra, and had some racist and sexist undertones. But I can’t tell because it’s just plain stupid and unnecessary.

But Priyanka Chopra doesn’t need me to defend her. Because she’s gone ahead and done it herself in a very gracious and smart way—by sharing her 60+ film credentials with him!

Would love your thoughts on what qualifies someone. Here are my 60+ film credentials for your adept consideration @mrpford https://t.co/8TY2sw1dKb pic.twitter.com/T8DnQbtXZG

Ford, on the other hand, has deleted his tweet, because it probably wasn’t qualified to be a legitimate tweet in the first place.

As a brown girl, I get a tad defensive when I hear people throwing shade at Priyanka Chopra, because I’m vicariously fulfilling my Hollywood dreams through this woman. She’s done a film with Liam Hemsworth and Pedro Pascal, is friends with some of my role models like Mindy Kaling; she’s going to be in a Matrix movie. And she just finished a rom-com with my on-screen crush Sam Heughan. Not to forget, the woman twirled on the stage with Tom freaking Hiddleston. And all the shiny bits aside, Priyanka Chopra is making great strides with as a producer too with more Asian representation in Hollywood. And form the looks of it, she can sure as well handle a few snobs on Twitter too!