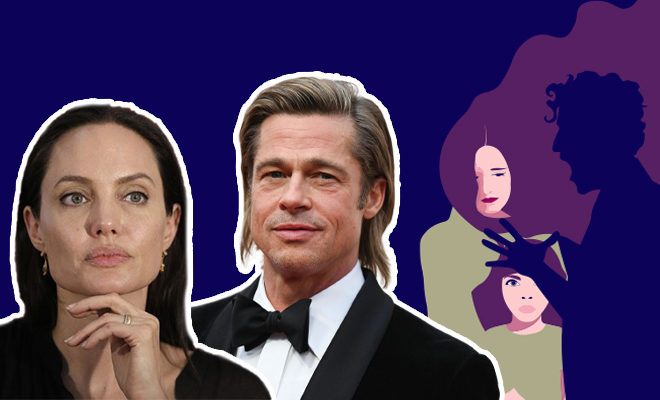 In a latest and rather unexpected development in the Angelina Jolie – Brad Pitt divorce case, Jolie is now claiming that she is prepared to submit proof of alleged domestic violence against Pitt. The once upon a time Hollywood power couple, who met in 2004 on the set of their film Mr. and Mrs. Smith were married in 2014, after seven years of dating. However, just after two years, in 2016, Jolie filed for divorce from Pitt citing irreconcilable differences. The two are currently legally separated and their divorce proceedings are ongoing. The Jolie-Pitts have six children together, three of them adopted—Maddox Chivan Jolie-Pitt (19), Pax Thien Jolie-Pitt (17), Zahara Marley Jolie-Pitt (16), Shiloh Nouvel Jolie-Pitt (14) and twins (12) Knox Léon Jolie-Pitt and Vivienne Marcheline Jolie-Pitt.

According to ET, based on obtained new court documents that were filed under seal on March 12, 2021, Angelina Jolie has alleged that she has “proof and authority” against Brad Pitt for the allegations of domestic violence she has levelled at him. Jolie has reportedly also filed another document which contains testimonies from their six minor kids.

Back in 2016, ET had also reported that Brad Pitt was cleared of allegations of child abuse by the FBI and the Department of Child and Family Services. In an interview later with GQ, the Once Upon A Time In Hollywood actor had spoken about the allegations.

“I was really on my back and chained to a system when Child Services was called. And you know, after that, we’ve been able to work together to sort this out. We’re both doing our best. I heard one lawyer say, ‘No one wins in court — it’s just a matter of who gets hurt worse.’ And it seems to be true.”

While his personal life has been difficult since the divorce proceedings began, professionally Pitt has been doing quite well. In 2019-2020, he did a near-cleansweep for the Best Supporting Actor award for Once Upon A Time In Hollywood, bagging the Oscar, Golden Globe, the Screen Actors Guild and a bunch of others. As a producer too, Pitt has been going strong with award-winning films like Ad Astra, If Beale Street Could Talk, Beautiful Boy, Kajillionaire, and the most recent, Minari.

As for Angelina Jolie, the actress was last seen in Maleficent: Mistress of Evil and Come Away. She’s all set to enter the MCU (Marvel Cinematic Universe) with a Phase 4 biggie, Eternals, in which she plays Thena. On the personal front, she had told a news portal that she has been focusing on healing her family. In an interview with ET in August, Jolie talked about being lucky that she had her children helping her and each other through the pandemic.

“You know, I am so lucky. We are so used to being tight together for a long time. I’m lucky, and I think when you have that many children, they really take care of each other. They help me. I’m not alone managing everything. They are an amazing team, so I’m very, very fortunate.”

It sure looks like their impending divorce trial is about to get a whole lot messier. A source told ET that Angeline Jolie is simply changing the narrative once again to suit her needs. “Aside from the one accusation that she made in 2016 that was investigated and dismissed, there have never been any other records, police reports or even accusations until it suited her case. No one else knows what she might say now, but that background is important.”

Looks like we’re going to have to wait and watch. We can only hope justice is served and if there has been a crime, commensurate punishment is given.

Reese Witherspoon Says Women Who Make A Lot Of Money Are Often Shamed For It. Her Message Is Relevant To All Working Women