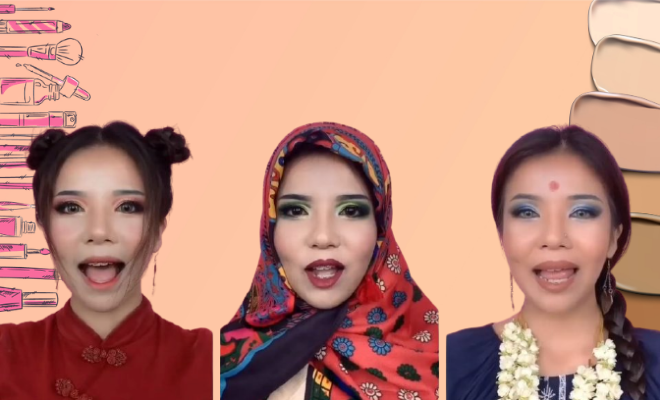 A Malaysian Makeup Brand Promoted Colourism And Cultural Stereotypes By Showing An Indian Woman Doing Namaste. What Even?

Another day, another beauty brand has come under fire for making a boo boo on social media and received backlash for it. Let me rephrase that. Once again, a makeup brand has projected racism and colourism and cultural stereotypes  through their advertisement and didn’t realise it until netizens literally spelled it out what was wrong with the ad. This time, it is a Malaysian makeup brand C.Code Cosmetics that received some serious heat from netizens, Indian women to be specific, for sharing an ad that used one model to show skin tones of different races with the use of their makeup product.

The ad features different shades of their foundation line and a model who tries out the shades and dresses up as women of different ethnicity including Indian. The problematic ad is not only deeply offensive and racist but also promoted colourism as it shows the skin tone of the model changing (getting darker, actually) as she switches into the get-up of the presumably Indian woman, wearing gajra, bindi and moving her head sideways while joining her hands. Uff, the stereotyping is just painful.

An Indian woman on Twitter pointed out just how racist the ad was and that it fuels cultural stereotypes which propelled the brand to take the video down, but it was a little too late for them to save themselves from the backlash. The video was already doing rounds on the social media platforms and people called it out for being offensive and culturally inappropriate.

After the brand retrieved the video that stayed on the social media for two days, a retail chain that sells the brand posted the same video and drew further flak. However, the funny thing is they didn’t exactly apologise. They wrote to the user who called them out saying, “Hi @Roshinee_M, on behalf of Watsons Malaysia, we thank you for your time and appreciate your feedback. Rest assured that we will strive to do better moving forward. Have a great day ahead and take care.” Do you see an apology anywhere here? Neither do I.

Hi @Roshinee_M , on behalf of Watsons Malaysia, we thank you for your time and appreciate your feedback. Rest assured that we will strive to do better moving forward.

Have a great day ahead and take care.

Also Read: This Men’s Grooming Brand Uses Disgusting Sexism And Women In Skimpy Clothes To Sell Products. We Are Not Okay With This

What I don’t understand is why they felt the need to cast one model to demonstrate different skin shades? That’s not what we mean when we say beauty brands need to be inclusive. Giving them the benefit of the doubt, let’s say it was a badly misinterpreted and wrongly executed creative idea, why couldn’t they use models who matched the different shades of the foundation? I mean, what was it? Budget problems or just sheer ignorance of other culture? Also, how come brands don’t realise the problem with such ads when even a 5-year-old can possibly point out the crude racism and colourism in the ad? The least they could do is be subtle about it but seems like not one person in the whole production team could point a finger at it. It had to be done by the Twitter users, since nothing escapes their eye.

This is not the first brand to have made a blunder and it won’t be the last. Honestly, I am sick of brands deliberately offending entire cultures and then offering throwing empty gestures and apology statements. They never really get a wake-up call, do they?  You know what would be great, if these beauty brands could collectively learn from each other mistake and come up with non-offensive content that doesn’t promote racism, colourism or cultural stereotypes.

Also Read: Another Company To Drop The Word ‘Fair’ From Its Soap Range. Are Brands Really Being Inclusive Or Just Succumbing To Social Pressure?