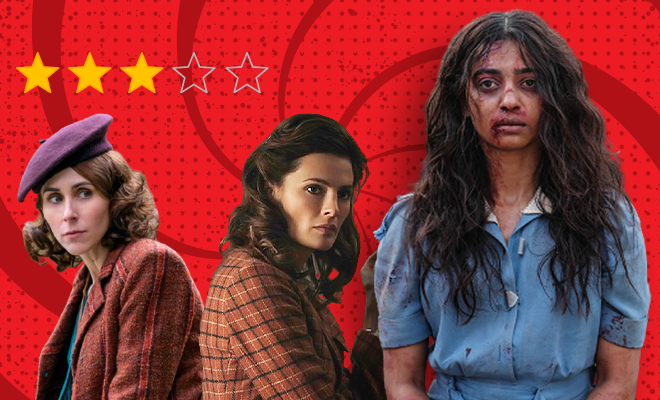 When you think of an espionage thriller, your mind immediately wanders off to slick spies, roaming around in disguises that actually make them look stylish. They seem to have bottomless funds, can fashion weapons out of anything, and drive swanky cars. They’re also, more often than not, men, like James Bond, who even amidst the fear of their life, can manage a romp in the sheets with sexy women. But the real world of espionage is not even 0.1% that glamourous. Especially, if we’re talking back to the time of World War II, when being a spy was like signing your own possible death sentence. Director Lydia Dean Pilcher and writer-producer Sarah Megan Thomas’ film A Call To Spy, belongs to this non-flashy, realistic realm of espionage thrillers. Thomas stars in the film alongside Stana Katic and our very own Radhika Apte.

The film is based on true events that transpired during second World War, when Britain was building up a resistance to the Nazi forces, and dispatching spies to France to gather intel. However, they were low on their preferred manpower. And that’s when one Vera Atkins, a spymistress within Prime Minister Winston Churchill’s new spy organisation, the Special Operations Executive (SOE), proposes to her boss, Maurice Buckmaster, that they recruit female spies to the mission. No one will suspect them, she says.

And to her credit, she recruits exactly the kind of women who look nothing like spies. Atkins finds Virginia Hall, an ambitious American who wants to be a diplomat but is denied because she has a wooden prosthetic leg (she’s named him Cuthbert!). Next, she recruits Noor Inayat Khan, a former Indian princess born to an Indian Muslim father and an American mother, who is a pacifist and follows the ideals of Mahatma Gandhi.

Both readily agree and have their own reasons to do so. Virginia wants to do something as an American, since her own country has not yet shown any initiative to actively counter the Nazis. In an illuminating scene, Atkins asks Noor why she wants to join the war if she is a pacifist. And Radhika Apte, brilliant as Noor, tells her that she hopes an Indian wins a high honour in the war which could perhaps help bridge the relationship between India and Britain, amongst other reasons. As for Vera Atkins’ own motivations,  it is revealed later that she is a Russian Jew who doesn’t yet have her British citizenship papers. And if she is ever deported back to Romania, she would be executed.

A Call To Spy then follows the lives of these three women, which though run parallel, often intersect.

A Call To Spy is an elegant and very real portrayal of espionage, minus the flashiness or fluff.

Vera Atkins, Virginia Hall, Noor Inayat Khan… there are very real women and the events depicted in the film are real events that would’ve actually transpired in their lives. In that sense, one could say that the film doesn’t really offer up new information. If you just read their Wikipedia entries, you could get the broad strokes of what these women did for their country and how it helped defeat Hitler and Nazi Germany. But we all know, not everyone’s going to be reading this or understanding the minutiae of their contribution, their courage, their risk. And that’s why, their stories needed to be told.

What makes me even more glad is that their stories were told this way. A Call To Spy (a play on ‘A call to arms’ which calls people to into battle) is not like your usual spy thrillers that’ll serve you suave men and women with stylised fight sequences that imitate adrenaline rush and arousal every few moments. No, it deals with the heavy lifting, the behind-the-scenes if you will, the stuff that most massy fans of the 007 franchise would deem as boring.

The film deals with a very nascent stage of the SOE’s programme with the female spies. There are silly mistakes, their’s unpreparedness, there are mistakes that cause loss of lives that could’ve been avoided with better planning and communication on their part. And the film deftly highlights all of that. For example, in just single conversation between two men, the film manages to point out both Britain’s underling xenophobia towards Jews as well as the blatant sexism in the military. At one point, one of the officers tells Stana Katic’s Vera Atkins that she better recruit pretty women for the mission. And Katic, in her trademark amusement that I’ve loved since Castle, tells him, “For the Germans or for you?”

The film doesn’t have any fluff either. It jumps straight to the point (though I think it results in some abrupt cuts which I felt were weird and unnecessary). They show training but don’t get too detailed into it, which is a good way of making us believe just how green these female spies are and the urgency that must have been to send them into the field so early. Which then helps us appreciate much of what they do, because it proves they were going beyond their training. After all, can anything prepare you for that life where any second you could be shot by the enemy? Or worse, captured.

Unlike movies such as Raazi, another female spy outing, A Call To Spy, like actual spies, detaches itself from extreme human emotion. It has its softer moments, where the characters are vulnerable, emotional, broken down or worse, but most of it is measured or off-camera. A spy has to remain in control, poker faced. There’s no love story or overly emotional moments around death or exhibits of jingoism here, thank God. And it still makes for a very elegant and substantial film.

I keeps saying elegant, because the film is shot and stylised in a way that suits its era, and the fashion is also quite on point. It’s subtle and non-flashy, but not boring. Basically, you could say it is rather British!

Sarah Megan Thomas, who is both the writer and producer of the film as well as Radhika Apte’s costar, said that she saw Apte in Parched and knew that she would be the perfect Noor. And I can see what she might’ve seen. Radhika Apte is impeccable as Noor. There’s this childlike innocence on her face, but that doesn’t take away from her resolve to keep the most dangerous post in all of France. She’s a wireless operator, the first female one to be sent for such a mission, and I think Apte does justice to her character. I loved the scenes when she is interacting with Vera Atkins, her friendship with Virginia Hall where she is amazed by things like her prosthetic leg or a new disguise, and a scene with her mother where she’s saying her goodbye.

Stana Katic, we need to see more of you!

Listen , I LOVE Stana, okay? Castle remains, to this day, one of my favourite shows, one of the first ones that made me start watching more of American television (nope, Friends was not it). I wanted to be like Detective Kate Beckett! For a writer, I am going to suck at putting into words what is is about her that I love. But Katic’s Vera Atkins is the kind of woman who can both formidable as well as inspiring all at the same time. When she smiles at Noor or Virginia, it makes me want to be the one who has done something to impress her, you know? Could it have been this empowering faith she had in her people that made them do what they did? I’d like to think so.

Also, I read up on Vera Atkins before I watched the movie. And she seems an incredible woman. Stana Katic gave us a very human side of her. Another role model character she’s played now!

I’d like to tip my hat to Sarah Megan Thomas for being so meticulous!

This woman dons so many hats for this film! I read that she worked on researching this film for years, speaking to the living relatives of these brave women before writing them. I can see her hard work pay off, as the film isn’t a hollow tribute but an ode to their memory, and tells their real story. Her Virginia Hall is undisputedly the lead character here and Thomas does justice to the part completely. Her performance is measured and strong, both on and behind the screen.

The only call this movie misses

I’ve already mentioned the issue I had with the film’s jarring edits at some points. While the film is quite a real portrayal, we don’t get to see much atrocities of the war, except for a few incarcerations here and there and a few people dead. World War II has quite the gory, terrifying history, and the film then does feel like a very sanitised portrayal of the war.

In that sense, I felt like maybe the film could’ve done better as a miniseries or something? Because there’s a lot that these women did that is not shown here. For example, Noor Inayat Khan was captured within four months of her arrival in Paris, but she was incarcerated for ten months before being executed at a concentration camp. And even during all this, she never gave up information. Virginia Hall led more missions, and went on to become the first female agent of what we know today as the CIA. Vera Atkins lost a lot of her spies to this mission, and post war, she tracked down the fates of each one of them because she didn’t want to just abandon them without closure.

All of these are remarkable facets of these incredible women’s stories that also deserve to be told. And while I am glad that the runtime is decent (2 hours) and the film doesn’t dilly dally on unnecessary things, I feel their lives deserve more than end credits exposition. It’s not exactly a dealbreaker for me, but an appeal to creators to take up these stories!

Verdict: A Call To Spy is the real deal and tells a story that needs to be told.

The film decided to tell a story, the untold story of female spies of WWII. And it did just that. Not all the warts et al. but enough. It chose its premises rather carefully, and stuck to them rather than running in different directions. It was clinical and precise, and IMO very impactful. A Call To Spy is more of a Tinker Tailor Soldier Spy than it is a Raazi or a James Bond or a Kingsman. And I actually like that, because you’d expect a film about female spies to be vain and extravagant and leave the more serious stuff to the boys. Thankfully, these female spies and the film about them, both are into breaking stereotypes.

Durgamati Review: Horror Unintentionally Turns Funny, And The Message Is Lost In Translation.