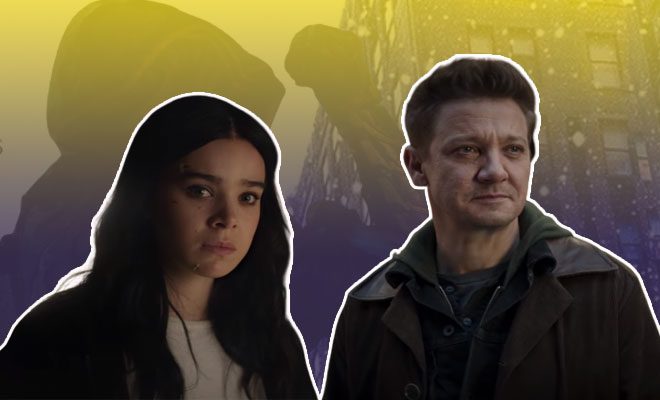 5 Thoughts We Had About Marvel’s Hawkeye Trailer: We Like Hailee Steinfeld And Jeremy Renner’s Team Up!

When the MCU Phase 3 ended with two biggies—Avengers: Endgame and Spider-Man: Far From Home—everyone wondered how the future of Marvel Studios would be like, with some of its biggest heroes dead or retired. With the MCU Phase 4 slate announcements, there was promise, but would they be able to deliver? Well, here we are, two years after Endgame, and Marvel is definitely dropping ‘em like its hot! Black Widow, Shang-Chi And The Legend Of The Ten Rings have been huge blockbusters, and the Disney+ series have been massive hits. Just this weekend, WandaVision swept a few awards at the creative Emmys! And now, we’ve got the trailer for Hawkeye that promises a fun Christmas time adventure with Jeremy Renner as Clint Barton and Hailee Steinfeld as Kate Bishop!

Renner has been hyping up the show’s release for quite some time, dropping BTS from the shoot on his Instagram. Some blurry shots of Hailee in her Hawkeye costume had also appeared on the Internet, getting fans excited for the show. On Sunday, Jeremy Renner took to his social media to announce that a trailer will be released on Monday, and well, here we are!

The Hawkeye trailer takes us to a post Endgame world, where Clint Barton is looking forward to some quality time with his kids during Christmas. But his plans don’t hit bullseye because a blast from the past threatens to ruin the festive cheer. The official synopsis of the series reads, “Set in post-blip New York City, former Avenger Clint Barton has a seemingly simple mission: get back to his family for Christmas. Possible? Maybe with the help of Kate Bishop, a 22-year-old archer with dreams of becoming a Super Hero. The two are forced to work together when a presence from Barton’s past threatens to derail far more than the festive spirit.”

Also Read: ‘Shang-Chi And The Legend Of The Ten Rings’ Review: A Marvel Origin Story That Looks Stunning, Is True To Its Asian Heart, And Has Action That Kicks Ass

Exciting, no? Especially since the teaser trailer alludes to Barton’s Ronin days and brings in a fan favourite from the comic book! Plus, this is another addition to Marvel’s growing roster of women-led stories dominating the new phase, and we are super ready for another badass female superhero to kick some ass. The series also has Vera Farmiga and Fra Fee in its cast.

Here are 5 thoughts we had about Marvel’s Hawkeye trailer on Disney+:

1. In keeping with the trend in its other series, Hawkeye too looks unlike the MCU world we’ve inhabited in the movies. It’s got a distinct visual language, and going by the Christmas time setting, it could easily pass for a Disney holiday movie!

2. We are so ready for Kate Bishop to take on the Hawkeye mantle! She looks great in her purple costume, and from the glimpse of action we got in the trailer, she’s channeling some of that klutzy but brave superhero charm that is endearing.

3. Can we all agree that Barton and Bishop’s banter (look at that alliteration) is hilarious? It is something I am looking forward to the most! The series looks like sets store a lot by its humour quotient, and these two might not be the only ones making us laugh. Did you catch a peak at the ‘Rogers: The Musical’ posters? Considering the series is set in New York City, might we assume a tribute musical to Captain America will be shown playing on Broadway? That’s going to be fun, right?

4. If you, like me were super curious about what Clint Barton was up to during his Ronin days post the Snap, when Natasha found him in Japan, it looks like we might get some answers in the series. Something from that time is returned to haunt Barton, and if we go by the comic books, it’s got something to do with assassins as well as the organised crime in the city. To top it all off, if you’ve seen Black Widow, the end credits scene involving Yelena, Natasha’s sister, might also link into the series and Barton’s future. Interesting!

5. Who’s ready for Lucky the Pizza dog? Yes, that is the fan favourite that I was talking about! Fans of the comic books will recognise him in the trailer. Lucky the pizza dog might not have super powers, but he is an adorable sidekick to both Barton and Bishop. Although you could say the adorbs golden retriever does have the superpower to always find a pepperoni pizza slice for himself!

Hawkeye will begin streaming on Disney+Hotstar from November 24, 2021.