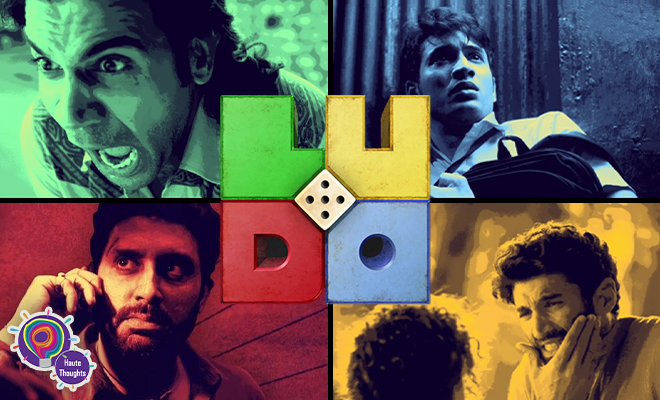 5 Thoughts I Had While Watching Netflix’s Ludo Trailer. Mainly Ki, This Clash Of Four Stories Looks Funny And Chaotic

Ludo… game toh khela hoga? I have lost count of the number of friends who’ve invited me to play this childhood game’s virtual avatar during the lockdown. But even before we were all driven apart by Coronavirus, ludo was an obsession. It’s one of those classic games that just doesn’t get old. There’s luck involved, of course, with the roll of the dice being central to it. But there’s a fair amount of strategy too. One roll of dice, one move can change the game for all players considerably. Using this insight as a sort of unifying metaphor is Anurag Basu’s latest offering, Ludo. The film is produced by T-Series and is a highly anticipated Netflix Original. And it’s trailer, which dropped today, caused quite the flutter because… have you see the ensemble cast? Ludo stars Abhishek Bachchan, Aditya Roy Kapur, Rajkummar Rao, Pankaj Tripathi, Rohit Saraf, Fatima Sana Sheikh, Sanya Malhotra, Pearle Maaney, Inayat Verma, Asha Negi and Shalini Vats. Phew!

If that cast list hasn’t suck its hooks in you already, the official synopsis of this crime comedy caper instantly piques your interest. Ludo is about the butterfly effect and how, despite all the chaos and crowd of the world, all our lives are inextricably connected. Ludo is four different stories tied together by unavoidable circumstances and coincidences far beyond our understanding, all of which make up for a crazy caper of a film.”

The trailer introduces us to the four different characters embroiled in four different stories. All of these stories we assume will at one point intersect because of one single decision that these characters make. And thus, chaos will reign. We catch a glimpse of Abhishek Bachchan’s character, in the middle of his first kidnapping, being helped by the little girl (Inayat Verma) who he kidnapped to make the ransom call! There’s Rajkummar Rao, who is approached by his school-time crush, Fatima Sana Shaikh, to help rescue her incarcerated husband from jail. Aditya Roy Kapur and Sanya Malhotra play a couple who seem to be at odds about what they want from their lives. Rohit Saraf and Pearle Maaney’s characters seem to be involved in some kind of money laundering. And finally, there’s Pankaj Tripathi being his gangsta self and shooting peeps left, right and centre!

Also Read: 5 Thoughts I Had While Watching Mirzapur S2 Trailer. I Can’t Wait To See Golu Get Her Revenge!

Kaafi chaos, no? Add to that this ‘black-and-white zamaane wala gaana’ playing in the end, and I was ready to roll the dice for a turn to watch this movie!

Here are five thoughts I had while watching Anurag Basu’s Ludo trailer:

1. Inayat Verma, Rajkummar Rao and Pankaj Tripathi had me ROFL!

I loved how little Inayat Verma sasses AB Jr’s kidnapper about this being his first kidnapping. Grown-up actors may disappoint you, but I’m yet to come across a child actor lately that has not impressed me with their performance. So I look forward to watching her story, especially because she and Abhishek seem to have a very fun and endearing, banter-heavy dynamic in the film.

I’m not too keen on venturing out to eat amidst COVID. But find me a server with Rajkummar Rao’s style of reciting the restaurant menu as he takes food orders and I’m game! That mullet, the filmy Dabangg rip-off cop dialogue, and him teaming up with Fatima Sana Shaikh’s character to save the husband of his school crush…. Tell me you don’t think this is probably going to be the funniest story of all!

Pankaj Tripathi is gangsta as always, and from the looks of it, he’s going to be dropping both bodies and punchy jokes that we are going to laugh out loud over!

2. Only Pankaj Tripathi can make a bad guy so endearing! Hey Netflix, can we have a ‘Pravachan With Pankaj’ series, STAT?

See here, Pankaj Tripathi could play a tree in a film about the Amazon Rainforest, and he’d still make an impression. I love his look—the leather jacket, the yellow sunglasses! The scene where he rolls up his—was that a dhoti?—to pull out a gun strapped to his calf feels like a spoof on those femme fatale scenes where the woman with a slit in her dress is hiding a gun up her gams! His dialogues are pretty funny too, especially about the fresh ishtart!

So, erm, Netflix, can we have guruji do a pravachan series on how to look this cool, no matter what you’re doing, from raising strong women to playing a gangster?

3. We get to see Fatima Sana Shaikh and Sanya Malhotra together again? Kya phirse Dangal hoga?

The last time we saw these two ladies, their sister act created quite the Dangal! In Ludo, sure, they’re characters in different stories. But since we know that all four stories are colliding, I’m excited to see these buds do their thing together in a few scenes! They’re both talented actresses, and their characters are both wives—one trying to rescue her husband, another probably disagreeing a lot with hers because of their views on money. Would be fun to see them clash!

4. The humour reminds me of the 2000s ka crime comedies, like Johnny Gaddaar and 99, hopefully rooted in a Yuva-like social setting.

Okay, the Yuva connect might be because of Abhishek Bachchan and the multiple-storylines coinciding bit. But the film definitely gives off a vibe similar to crime comedies that we’ve seen in the 2000s and early 2010s. such as Johnny Gaddaar, 99, Delhi Belly and so on. It’s rooted in small-time gangsters, real people doing questionable things for money, and seemingly innocent folks having an inexplicable penchant for crime. The humour is very similar, at least from what I gather from the few dialogues we hear in the trailer.

I enjoyed those movies a lot, and hopefully, Ludo with that cheesy and slightly old-ish humour, can replicate that entertainment.

5. I’m so curious to see how these stories connect, what event is the butterfly wing-flap, and if the ending is as chaotic as a Hungama, Delhi Belly or a Kaminey.

The butterfly effect, used to describe the connective tissue of Ludo‘s stories, insists on the event that sets things into motion to be very tiny, almost inconsequential. It’s going to be interesting to see how ‘not obvious’ the event/decision is that connects the stories in the film.

Also, chaotic climaxes can be of two types, chaotic good, like a Hungama or a Delhi Belly, where everything chaos breeds hilarity. Or, it can be chaotic evil, like maybe a Kaminey, where a lot of people die and bad sh*t happens. Either way, I hope the stakes in Ludo are high enough when the dice rolls for the climax.

Consider your Diwali party scene sorted. You can play Ludo on Netflix as it releases on November 12.