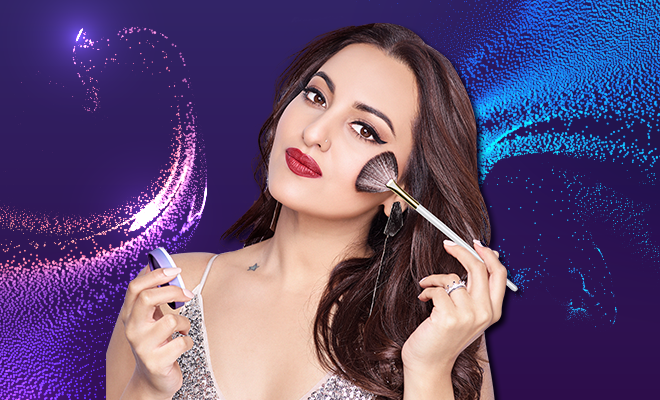 Sonakshi Sinha is one of the most free-spirited actresses working today! Her colourful personality shines bright in the choice of movie roles and personal style. This fiesty leading lady has a fan in us already. But we wanted to get to know her a little better. Especially her approach to beauty and her revelations were refreshing. Her mother and another iconic woman are her personal beauty icons. About them, she said, “I think she’s still so beautiful, even today. And there is also Rekha aunty, who never ages, and looks so stunning with and without makeup”. We love that!

Sonakshi has taken her love of fierce ‘lewks’ a bit further and collaborated with MyGlamm on a new launch, Pose. According to CMO Malaika Mahtaney, “Formulated with optical blurring technology, each product in the collection is designed to make the wearer look flawless when photographed—even when photographed in the most unflattering circumstances, for e.g. when posing for your driver’s license, your passport photo… or for your mug shot”. Scandalous! This should have been around when I was shooting my Aadhar man. I look absolutely ghastly in that.

While talking to her about the collab, Sonakshi revealed some of her best-kept beauty secrets. When asked about what kind of makeup look she prefers, she said, “It completely depends on the situation. I personally prefer fresh-faced makeup that includes nude, peachy lip colours. But I also like being experimental. I think makeup rules are meant to be broken. I know it’s a rule that you’re not supposed to wear bold eyes and lips together, but there’s always an exception. Sometimes you can pull it off and I think I have.”, she confessed. As for how to get that ‘Asli Sona’ complexion, the trick likes in “lots and lots of water”…a habit Sonakshi’s mom drilled into her!

While Sonakshi likes to experiment when it comes to makeup, her daily skin care routines stay simple. She revealed, “I don’t have an elaborate beauty routine but I pay attention to the little things like drinking lots of water, ALWAYS removing my makeup before going to sleep, making sure my skin is always well-hydrated and moisturised and NEVER forgetting sunscreen. Since my job involves wearing a ton of makeup on a regular basis, off the set I prefer to be gentle with my skin”.

The actress prefers to balance out the stress her job puts on her skin by leaving it alone during downtime. She confessed, “I don’t like the idea of trying strange treatments—the risk of damaging my skin is too much. I prefer natural remedies like multani mitti and aloe vera to get my glow on. For that perfect, flawless skin finish however, I LOVE a good setting powder!”. Sweet!

Sonakshi revealed to being super into her new MyGlamm campaign as well. She confessed, “I’m really excited! I love this campaign because it’s not like any other typical beauty campaign. I hope people find the idea of me being arrested and the mug shot, cheeky and cool. The products in the collection are also really amazing, especially the Banana Powder and the Lipsticks. I hope everyone who’s addicted to taking selfies, posting pictures on social media—I mean, who isn’t these days—goes out and shops POSE. I promise you’ll love it!”

The actress is also excited for her fans to get their hands on the new collection. She gushed, “The collection also includes a blush, highlighter and bronzer duos, so you get two different shades in each palette, a translucent setting powder and a banana setting powder, which is honestly my skin superhero”. We are excited.