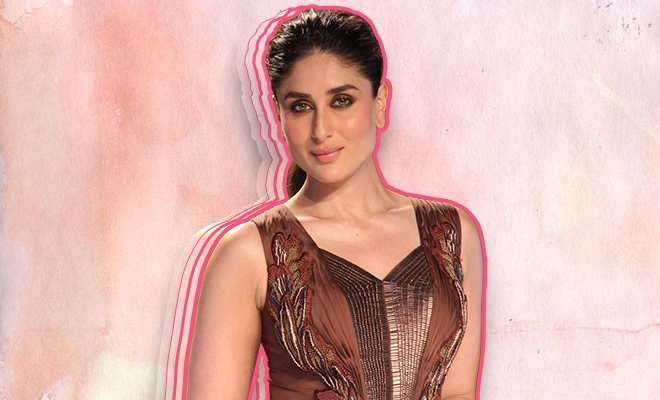 It is an established fact that Kareena Kapoor is among one of the prettiest faces in Bollywood, and an effortless one at that. I mean who would believe she uses Cetaphil moisturiser? It comes straight from her make-up artist of 16 years Ritesh Naik, so it’s nothing short of the gospel truth. Read more details here. After last week’s killer barely-there smoky eyes, Kareena attended an event for Magnum ice-cream in some seriously sultry copper-brown smoky eyes. I don’t know about you girls, but she’s giving me some serious #smokyeye goals.

It’s All About The Base: If you look closely, Kareena has an all over glow which is exactly how make-up should be worn. Many women look great chin up totally ignoring their necks and décolleté, and honestly that looks damn weird. I’d suggest mixing MAC Strobe Cream along with MAC Studio Fix Fluid foundation to get that all-over dewy complexion.

Smoke It Up: The shimmery deep brown eye shadow that’s been used on her eyelids and on the lower lashline looks like it came out of Urban Decay’s legendary Naked 3 eye shadow palette. Take care not to go above the crease line of your eyes. Also, don’t be heavy-handed. The beauty of Kareena’s smoky eye lies in how soft and romantic it looks. And don’t forget that blending is the key. Apply two coats of L’Oréal Volume Million Lashes Mascara and fill in your eye brows using the Freedom Pro Eyebrow Kit.

Get Cheeky: Add some warmth to your cheeks with NARS Blush in Orgasm. You can use a highlighting pen like Colorbar Radiant Glow on the bridge of your nose, forehead, and chin for added luminescence.

Lips: It looks like Kareena is wearing Estée Lauder Pure Color Envy Sculpting Lipstick in Insatiable Ivory, which is a creamy hydrating lipstick.