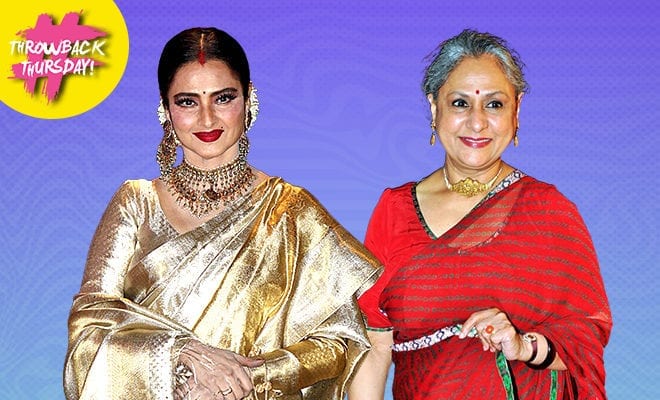 Throwback Thursday: Jaya And Rekha Are Connected By Love, Rivalry And Heartache

When you look at the Bachchan family, it looks so beautifully knit together. And yet, like most families, they two have certain knots that will co-exist with their bond. I am a family-oriented person and I can vouch that family (by blood or by bond!) is a unit, anyone is lucky to possess. Decades ago, Amitabh Bachchan and Jaya Bachchan became husband and wife and promised to spend an entire lifetime together. They made a haven for their children and built a life together. It may not have been perfect but as a family, they are there for each other. However, the entire nation has been aware of Amitabh Bachchan’s relationship with Rekha and it just never escapes our attention. What does that say about the complicated relationship between Jaya and Rekha, two women tied together by their love for the same man?

The ramifications of Amitabh and Rekha’s romance? Not Jaya, not Rekha have the contentment of the complete involvement of the man they love. But I guess love is not about ownership and every person has their own obstacles. Speaking as a mere spectator, Jaya Bachchan enjoys the commitment and family life she possesses with her husband but the bond isn’t unadulterated and remains shared. Technical problem. Mr. Raichand? Rekha, on the other hand, is full of confidence and conviction for the love she shared with Amitabh Bachchan, but she is missing the commitment and acknowledgment of that connection. Nobody is complete. Not even Mr. Bachchan whose heart remains divided.

With that, Jaya and Rekha shared a relationship none of them volunteered for but have anyway. They are connected and will remain so, in a conflicting, complicated way – the kind that inspires books and movies. So today, on the nostalgic occasion of throwback Thursday, let’s explore the decades’ worth of knots the two ladies witnessed together.

The inception of a trinity

Amitabh and Jaya got married after the success of their film Zanjeer on 3rd June, 1973 in a small wedding. “47 years.. today .. June 3, 1973..!! Had decided if ‘Zanjeer’ succeeded we, with few friends would go to London, first time, to celebrate.. Father asked who you going with? When I told him who he said, you will marry her then go.. else you don’t go.. I obeyed! (sic),” Amitabh Bachchan had revealed.

They had Shweta in March 1974 and Abhishek in February 1976, the same year that Amitabh and Rekha’s film Do Anjane released in January. This indicates there are high chances that Amitabh started his relationship while his wife Jaya had her second pregnancy. I mean, that’s when the rumours started. However, their affair gained media attention when during the shoot of Ganga Ki Saugandh (1978), Mr. Bachchan lost his cool on someone who misbehaved with Rekha. Decades later, people are still intrigued by the complicated nature of their romance.

In an interview in 1978, Rekha told Stardust, “Once I was looking at the whole [Bachchan] family through the projection room when they came to see the trial show of Muqaddar Ka Sikandar. Jaya was sitting in the front row and he and his parents were in the row behind her. They couldn’t see her as clearly as I could. And during our love scenes, I could see tears pouring down her face.” Soon after, Amitabh Bachchan released a statement he would not work with Rekha again. It must have been devastating to watch for Jaya!

When Rekha turned up in mangalsutra, and Jaya cried

Rekha created quite a stir when she turned up Rishi Kapoor and Neetu Singh’s wedding wearing sindoor and mangalsutra. While at the wedding, she was seen mingling with Amitabh while Jaya tried hard to keep a straight face. “Jaya tried to keep a stoic front for a long time, but eventually she had to bend her head and let the tears roll down,” a source revealed.

When Jaya took a stand and confronted Rekha

After this incident, sources revealed that Jaya had invited Rekha over for dinner. And like they show in the films, told her she is not going to leave her husband. And Rekha was left with no choice but to love without commitment. To date, Jaya and Amitabh Bachchan have continued to be a married couple with a close-knit family. She kept her word!

When Rekha criticised Jaya for staying with Amitabh Bachchan

“No one cares what I have to say. I am the other woman na? Parents are also embarrassed. Which parents will not be when their son has an affair? And image ki baat hai na. No one looks inside. The other party has this cute bechari image which fits beautifully. The impression is good na? I am free. The other person can’t do that. Can’t leave him and go away,” Rekha told Filmfare in 1984.

When Rekha said Amitabh denies it to avoid hurting his wife

Rekha told Filmfare in 1984, “Why should he have not done it? He did it to protect his image, his family, his children. Why should the public know of my love for him or his love for me? I love him and he loves me- that’s it! If he’d reacted that ways towards me in private, I would have been very disappointed. Mr Bachchan is still old-fashioned. He doesn’t want to hurt anybody, so why hurt his wife?” But really? I guess that ship sailed when they started the affair.

When Jaya signed Silsila to give a loud message to Rekha

So when Yash Chopra offered Amitabh Bachchan this film, he kept the condition that the trio would star in it together. However, he said he is comfortable as long as the ladies are comfortable. At first, Jaya refused to share the screen with Bachchan and his “special friend” Rekha. But what changed her mind? The ending ensured the husband returns to his wife! She made that quite clear, didn’t she? In fact, in a BBC interview, Yash Chopra confirmed the affair, “I was always on tenterhooks and scared (during Silsila) because it was real life coming into reel life. Jaya is his wife and Rekha is his girlfriend and the same story is going on (in real life). Anything could have happened because they are working together.” Uh-oh!

“I looked at you, you turned your face away. Why? You feel you are badly off, but can’t you see my position is worse? There is deep hurt in your gaze, but can’t you see that the wounds in my heart are deeper than your look?” Rekha said in an awards function. That time everyone thought these words were for Amitabh Bachchan. But in an interview much later, she revealed, these were for Jaya! Now read them again.

Jaya and Rekha are connected by strength, independence, and resilience. Both women have been strong and while the two seem to have provoked reactions from each other time and again, why? They are both on the opposite ends of the same boat!

ALSO READ: Throwback Thursday: The Evolution Of The Mother-In-Law In Bollywood