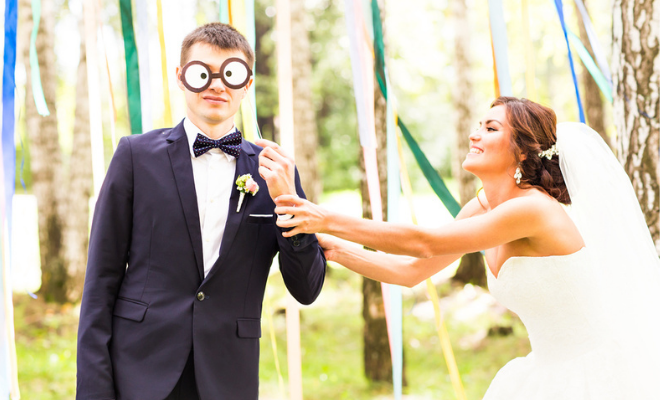 This Bride Is Furious After Her Husband Posed Goofily In All Their Wedding Pics. Would You Be Okay With This?

In Eat Pray Love, at the time of their first dance, Julia Roberts’ husband in the film surprises her by going all goofy with the moves. She realises it’s not the slow song they had picked and instead of doing a couple-y dance, he steals the limelight by doing something fun. When I was watching that scene, I was like oh boy, if my husband did that, I’d be so mad at him. I mean, surprises are cool but not at my wedding which cannot have a do-over! A bride recently shared her ordeal on Reddit about how her husband decided to goof up all their wedding pics. She only found out after they got their wedding photos and she had a look at them! And obviously, she was devastated looking at her wedding pictures where her husband pointed “gun fingers” at her.

She went on to explain how she was left with only six decent pictures after paying $ 1700 to the photographer. “We had a small wedding recently (outdoors) and hired a photog to take pictures,” she wrote. “In the pictures where we aren’t looking at each other, my husband is (unbeknownst to me) smiling with his mouth open extremely wide and pointing at me with finger guns,” the woman added in her post.

“We spent $1700 on the pics and most of them are so embarrassing…My husband won’t re-take any of them, and also wants our Christmas card to be one where he’s making the face while tipping an invisible fedora (ironically, I guess.) He thinks it’s funny and shows our personalities. But it really feels like it’s making me out to be a chump because I’m smiling sincerely,” she wrote feeling devastated at the loss of good wedding pics.

In what seems like an attempt at soothing herself, she wrote, “The woman says the photos “don’t look like he’s going to shoot me, more like “look at her!”” Caught off-guard by the unforeseen circumstances, she sought advice on what to do, “Should I just go ahead and give up this time or should I press further on the photos?”

Comments started pouring in and several people pointed out that a photographer must be able to direct the couple to get good wedding pics. “For $1700 you’d think the photographer would have intervened. Like, “ok groom, a few of those are funny but maybe take some serious shots now?” It’s unfortunate your photographer just let him do that in all the photos. Sorry to hear. If it means a lot to you I think your husband should just retake the pics,” a user wrote.

People didn’t have much hope from the groom and thought maybe photoshop could do some magic and get her the wedding pics desired. “Unless you do a new shoot there aren’t many options, they cannot recreate the day, but I would urge the photographer to see if they can find a few different shots and maybe work some photoshop magic. Photographers do that a lot with babies and toddlers, which are not easy to direct or make them smile or look at cameras at the right time, so you just take a bunch of extra pictures, choose the best and the photoshop the best head from another picture into the good one with the rest of the family,” a user suggested.

Well, that’s why it’s important to invest in a good photographer and warn your goofy partner to keep his true self at home. I understand the poor chap didn’t intend to ruin the wedding pics but he did overstep the line. I mean some funny candids are really good and a must-have in fact but not all should be that way. It’s possible he got awkward and nervous about being clicked.

A user shared how they had some candids and she found them cute but she would too be mad if all her pictures were that way. “My wedding photographer pretty much dictated a lot of our poses and whatever so we could have great pics but still allowed for some candids. The one where my (now) ex husband and I are in the car to go to the B&B where we were celebrating our wedding night was particularly cute. I am in the passenger side smiling brightly while he is smiling in a “oh yeeeeeah” kinda way in the back ground. If my ex had done this in all our photos I would have been really pissed but because it was just one it was funny and cute,” she wrote.

Some people really got upset that he wasn’t willing to do retakes. “If he were a friend of mine I’d tell him…”Really? Really?? Dude, this is the hill you want to die on? You’re going to start out your married life like this? How many times is your wife going to look at those photographs? That’s a trick question…a lot more than you(unless he’s into scrap booking). So now you’ve made sure she’s going to be annoyed…with you…going all the way back to your wedding day. Please tell me you’re not this stupid. Since you don’t understand why you’re wrong, you just need to accept that you’re wrong. Please…for the love of God…just shut up and retake the pics and be grateful she offered that option,” a user wrote.

Okay, honestly speaking if I were her, I would obviously be very mad at my husband but years down the line I would look at those wedding pics and still smile. Those are just goofy pictures, it’s not so bad that it should affect your marriage. How will you handle the bigger issues later in life? Sometimes, you have to take a deep breath and let it go because your partner messed up but he didn’t intend to. Focus on the love, the new beginnings and not the wedding. Maybe he is really awkward with being clicked, who knows? Talk it out but don’t affect your marriage on the basis of this.

ALSO READ: Brides Are Doing Pre-Wedding Photoshoots In Shorts, Jeans And Candid Poses. We Love How Brides Are No Longer Shy

This reminds me of this friend of mine who always makes goofy faces when he is clicking a selfie with me. He has an entire assortment of my candids in which he has a funny face on and on realising it, I have a troubled look on my face. But here’s the thing. I don’t delete those pictures because they are special. I find it cute and it brings his true personality out. I understand I wouldn’t want the same for my wedding pictures but like cut him some slack. And yes, warn him to never pull that off ever!

ALSO READ: In An Attempt To Get More Unique Photographs, Pre-Wedding Photoshoots Are Getting Dangerous.