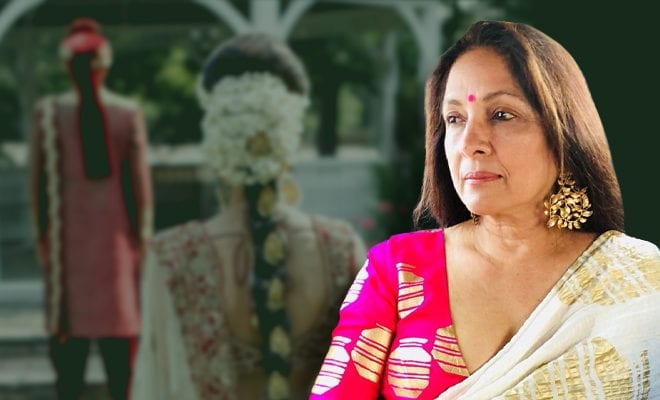 Neena Gupta Revealed How A Man Called Off Their Wedding While She Was Bridal Shopping. Well, His Loss

A little late to get on it, but I have been watching The Irregulars these days. It may be an intersection between occult and crime but it is also a lot about this journey called life. So when Sherlock Holmes told his stepdaughter, “Life isn’t supposed to be painless Beatrice. Joy and suffering dance together long into the night. Don’t ever hide from them,” it really made me think. The choreography may be different but each one of us have to dance on its tunes, so we might as well learn a step or two! Neena Gupta is one actress who has danced and how. She never shied away from talking about her struggles, be it about her financial crisis, raising a daughter single-handedly or dealing with loneliness.

Recently, Kareena Kapoor launched her much-awaited autobiography titled Sach Kahun Toh which is known to be a tell-all kind. Neena Gupta is known for her straight forward speech and when in conversation with another say-it-like-it-is queen, she revealed things nobody knew before.

Neena Gupta said that she barely had any long-term relationships when she moved to Mumbai. We know of her husband Vivek Mehra and her ex Vivian Richards, father of her daughter Masaba Gupta. But apart from them, there was another man who she was supposed to marry. He called off the wedding when she was bridal shopping! “Till today I don’t know. That happened. But what can I do? I moved on. I would have loved to get married to him. I had a lot of respect for his father, mother. I was living in their house. He’s going to read, he’s alive, he’s happily married. He has children,” she said in the interview.

You dream of getting married and you think you’re there. And then it all comes crashing down. The most important thing I take from her life is that you cannot place all your trust in a lover and stop being your own person. It was because she has been such a fierce lady that she recovered from these blows and created a beautiful life for herself and her daughter. Another thing she inspires me to do is love like I’ve never been hurt when you do find a man who is worth it, as she is with one now.

Neena Gupta is beyond the loneliness that plagued her life earlier. “In fact, while I was writing the book, I realised in my prime years I have been without a lover or husband. Because I came here, then small affairs, nothing really materialised. Basically, I was all alone,” she told Kareena. She elaborated, “Even with Vivian, he was far away, he had his own life. We met very seldom.”

ALSO READ: Neena Gupta Didn’t Have The Money For A C-Section. Her Father Dismissed It As Unnecessary

Gupta pointed out how people are mistaken when they think she lived life on her own terms. “People say I lived my life on my own terms. Actually, I never did. Wherever I went wrong, I accepted it and moved forward. I wanted to have a normal husband, children, my in-laws. When I see other people I do feel a little envious. I did not blame, I did not become alcoholic, because what I wanted I did not get,” she said. That’s what it means to live life on your own terms – to get up when you fall and stand for your choices. It’s not getting everything you wanted; that’s just privilege. Neena Gupta, stop underplaying your fierceness!