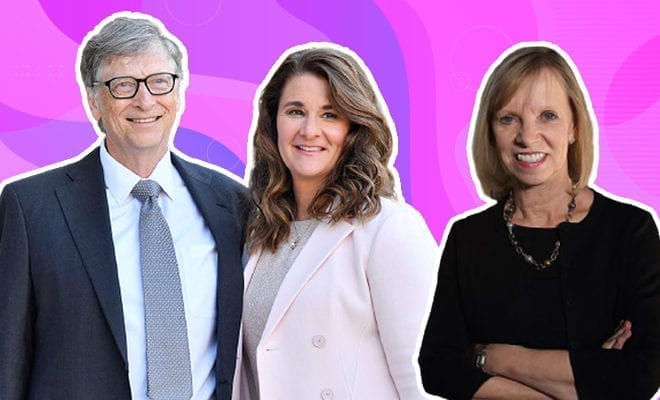 Bill Gates, Melinda French And Ann Winbald, A Woman He Took Annual Vacations Even After Marriage. Here’s A Look At This Relationship

It came as a shock to the world when Bill Gates and Melinda Gates (Melinda French now, I suppose) released a joint statement on Twitter announcing their divorce. The couple had been married for 27 years and dated for quite a few more before that. Time and again, Melinda often praised him and showed the world a side of Bill that we didn’t see. This wasn’t a business tycoon; she revealed his side as a charming, humourous and feminist husband. She had spoken at length about how they have equal partnership – be it at home or at work. Even when it comes to unpaid domestic duties, Melinda wasn’t taking up an extra load. Of course, she said it came with time but her husband inspired her towards equality in marriages.

Their relationship looked like it would last until we realised it didn’t. Their statement read: “After a great deal of thought and a lot of work on our relationship, we have made the decision to end our marriage. Over the last 27 years we have raised three incredible children and built a foundation that works all over the world to enable all people to lead healthy, productive lives. We continue to share a belief in that mission and will continue our work together at the foundations, but we no longer believe we can grow together as a couple in this next phase of our lives.”

Following this announcement, Bill Gates relationship with his ex-girlfriend Ann Winblad has made it under the spotlight as people continue to speculate if his closeness with her could be the reason behind the divorce.

If a genius such as Bill Gates gets smitten by a woman, we can expect her to be one of great intellect too. Ann Winblad is a business woman with over four decades of experience in the software industry. I guess they share several interests!

Her career began at Minneapolis’ federal Reserve Bank as a systems analyst. And then she went on to co-establish her first company, Open Systems, Inc., which was sold for over $15 million. Then she co-founded Hummer Winblad Venture Partners and over the years, launched 160 companies. She has also been a consultant for IBM and Microsoft.

Ann Winblad married Alex Kline in 2015; he is a private investigator that specializes in deaths and disappearances. He also has a major in human biology and runs his own agency.

Why are we talking about Ann Winblad now?

In 1997, Bill Gates had revealed that he has a pact with Melinda that he is allowed to take annual vacations with Ann Winblad. Apparently, she was okay with the duo spending a weekend in a cozy beach cottage; it wasn’t a cause of concern or was it?

It is not confirmed if the annual tradition has been still on all these years but there are speculations that it could have something to do with the divorce. Honestly, we don’t know, but this is an intriguing arrangement. Would you be comfortable with your husband taking annual getaways with his ex-girlfriend? I wouldn’t allow that. I am possessive and this setting violates my boundaries. But to each his own.

The love story of Bill Gates and Ann Winblad

But let’s first talk about how they met! Gates met Winblad in 1984 at a Ben Rosen-Esther Dyson computer conference. In fact, the two geniuses were much ahead of their time and dating in a way we have been, due to the pandemic. They went on virtual dates! Of course, back then there was no Netflix or Netflix Party, so they would watch the same movie at the same time, in their respective cities. And then they’d call each other and share their views on the film. So innovative!

“On a vacation to Brazil, he took James Watson’s 1,100-page textbook, Molecular Biology of the Gene, and they studied bioengineering together. On another vacation, to a Santa Barbara, California, ranch, she took tapes of Richard Feynman’s lectures at Cornell, and they studied physics,” a TIME magazine article revealed. “In the evenings on each trip they would go to the beach with four or five other couples for bonfires, Hood Canal-style games and a tradition they called the sing-down, where each team is given a word and has to come up with songs that feature it,” the article added.

So why did they break up?

They seemed perfect together – like two peas in a pod. So why did they break up? Apparently, the duo broke up in 1987 because Gates wasn’t ready for marriage and Winblad wanted to get married. She is also five years older than him.

However, all we know of Winblad’s marriage is that it happened in 2015. I mean, is that her second marriage or first? So technically, if they hadn’t broken up in 1987 due to the lack of Gates’ readiness for marriage, they could have been together now? I mean he did get around to it eventually, when he married Melinda French in 1994.

I guess we makes decisions, but we don’t really know what happens in the future and if our calculations are right or wrong. This love story doesn’t sound less than an epic saga that Sanjay Leela Bhansali could possibly make. Or Anurag Basu considering the intellectual-eccentric types don’t fit in Bhansali movies.

And then came Melinda

Interestingly, Bill met Melinda the same year he broke up with Winbald at a Microsoft conference as she was an employee there. Eventually, the two became a couple and Melinda’s mother wasn’t very fond of the idea of dating the CEO of the company she works at.

However, things really worked for the two as they got married eventually. Melinda however revealed that he was still commitment phobic when they were dating. She said he had a list of pros and cons of getting married on a white board at his place. Gates was apparently worried that he wouldn’t be able to be as committed to his marriage with his focus on Microsoft. But he also knew it would either be a break up or saying ‘I do’ – there was no in-between.

And then what does Bill Gates do? He calls up his ex-girlfriend and confidante to seek approval. Ann Winblad told him he should marry her since she had the intellectual stamina to provide him lifelong companionship. Not lifelong, is it?

I mean, Melinda must be one hell of a secure woman who is not bothered by these things. As intelligent as Bill is, why did he feel the need to seek approval from his ex? I would be uncomfortable if I found out the guy I married did that. But I also have maturity of a woman in her 20s who makes 99.99 % less than what she does. Who am I to say?

In an interview, Winblad had said, “We share our thoughts about the world and ourselves. And we marvel about how, as two young overachievers, we began a great adventure on the fringes of a little-known industry and it landed us at the centre of an amazing universe.” They are truly connected!

However, Melinda mentioned in her divorce application that their marriage was irretrievably broken. In fact, while they have mutually decided the division of assets, she refused spousal support from Bill Gates. But then, she probably doesn’t need it!

ALSO READ: This Man Married The Same Woman Four Times And Divorced Her Three Times To Get Extended Paid Leave

Bonus: Bill Gates as a lover

It is a known fact that Bill Gates has been an over achiever since childhood. Back in his teenage years, while kids his age didn’t know what they wanted to do, he was making computer programs. Apparently, he made one for class scheduling but nobody knew that he secretly tweaked it to land him in the same class as the girls he found attractive.

In fact, when Bill Gates had asked Melinda French for the first date, she had turned him down. He apparently asked her to go for dinner with him two weeks from that Friday and she told him it wasn’t spontaneous enough for her. He called her up two hours later and asked her on a date that night and charmingly questioned if that was spontaneous enough for her! Damn, smooth move!

Before Nick, it was Bill Gates who maneuvered a jewelry store just for his lady love. “When Gates decided to propose to Melinda in 1993, he secretly diverted the chartered plane they were taking home from Palm Springs one Sunday night to land in Omaha. There Buffett met them, arranged to open a jewelry store that he owned and helped them pick a ring,” the TIME magazine article revealed.

It makes you really think of the unpredictable nature of life. Our relationships are constantly evolving, we are changing too and promising “forever” seems farfetched. But hey, we can always give it our 100 % and then let organic growth take us where we belong.