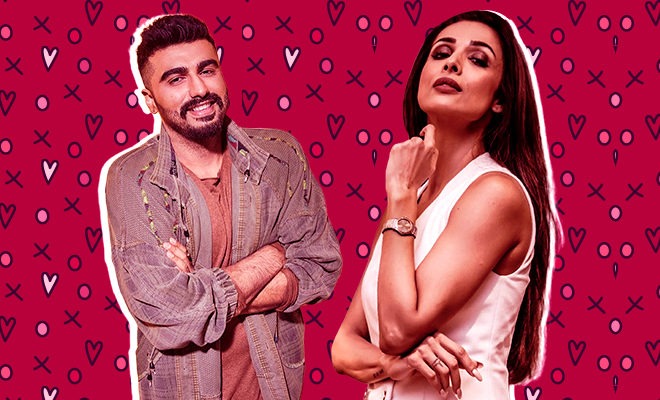 If I go by a scientific study and from the experiences of my friends, I can vouch that the pandemic and the lockdown have been more bearable for people in healthy relationships. From being commitment-phobic to getting misty eyed on a romantic sweet-sad scene in a film, several people have switched sides over the past year. Some even progressed pretty quickly in a new relationship as they had ample time to reflect on things and were able to move the roadblocks blocking the entry to their heart. A healthy relationship is like sunshine on a cold winter day. It brings you an understated warmth; it doesn’t burn or feel too much but makes you feel comfortable and hopeful. Malaika Arora and Arjun Kapoor’s relationship seems like it brought the same kind of peace and stability in their lives. It’s endearing to watch!

From the time when rumours were rife that the duo is seeing each other to the time the couple is openly expressing their love for each other – they’ve come a long way. There were so many speculations in the initial stage when they would be exchanging comments on Instagram, arriving at parties together, and being spotted together around town. They started taking romantic getaways and didn’t give two hoots about conjectures. And then, on Arjun Kapoor’s 34th birthday, Malaika Arora made their relationship Instagram-official by sharing a lovey-dovey picture of them.

Ever since there’s been no going back for them. It’s so adorable to collectively not give two hoots to the trolls. It takes two liberal individuals to make a relationship that’s equally progressive. That’s the kind of relationship I want, I seek. Here are 5 things we can learn from Malaika Arora and Arjun Kapoor’s relationship and hope to find something similar.

Recently, Arjun Kapoor told HT Brunch, “I love how dignified Malaika is. The way she has conducted her way through life from being a woman who started working at the age of 20 to today, being an independent woman with her own personality. I have never seen her complain. I have never seen her harbour any negativity. I have never seen her trying to change the narrative about things. She just believed in keeping her head down with dignity and letting her work do the talking and leading a life that allows her to be happy. I learn from her every day!”

There are several Indian men who would love to find an independent woman and then try their best to cut her wings. And then so many women consciously give up on their independence and strength so their partner doesn’t feel threatened. No, you don’t need to. The right guy will only be proud of the way you carry yourself with poise!

Remember when Karan Tacker was flirting with Malaika Arora and Arjun Kapoor got all possessive and jokingly asked him to stop? Possessiveness and love are fine; that’s adorable. But controlling your partner is not cool. The duo seems to understand the need for healthy space for a relationship to flourish. They both have their own set of friends, passions, and interests. But they seem very secure in their relationship to invade each other’s personal space!

“I wouldn’t even want to speak about this and give it importance. It doesn’t matter to me, so I don’t want to justify anything,” Arjun Kapoor told Times Of India. In a culture where you find men looking for a bride strictly younger than them, the age gap between Malaika Arora and Arjun Kapoor is bound to attract trolls. However, as long as they are liberal enough, who cares?

Malaika Arora had told HT Brunch in an earlier interview, “The age difference doesn’t really pop up when you are in a relationship. It is about two minds and hearts connecting.”

During her interview with Kareena Kapoor Khan, Malaika Arora said, “A woman getting looks upon getting divorced is bound to happen, ki, ‘Oh God, she’s a girl that you know…who got divorced or whatever.’ That is like the biggest disparity that there is amongst the many other disparities that you have to deal with.” The situation may not be the same but it comes down to the same mindset. An eligible woman is a virgin, hasn’t had past relationships, squeals at the thought of having babies, and will be the universal nurturer of the family – as per our society. There are so many stereotypes and stigmas that need to become redundant. Find yourself a man who has divorced from these misogynistic societal norms.

ALSO READ: Malaika Arora And Arjun Kapoor Keep Leaving Flirty Comments On Each Others’ Pictures And It’s Too Cute

“Unfortunately, we live in a society that refuses to progress with time. An older man romancing a younger girl is hailed everywhere, but when the woman is older, she’s called ‘desperate’ and a ‘buddhi’. For people who think like this, I have just one line: Take a flying f***,” Malaika Arora said in an interview with HT Brunch. The duo may have not made it official but they shied away from exhibiting their increasing closeness. And now that they are in love, they don’t care about log kya kahenge. A relationship between two consenting adults should not be influenced by what others think should or should not happen. So trolls can do what Malaika said!

ALSO READ: Malaika Arora Says Arjun Kapoor Makes Her Laugh. This Is What A Healthy Relationship Looks Like!