‘Sharmaji Namkeen’ Review: Wholesome Film About Second Innings Leaves You With A Smile, A Hungry Stomach, And A Heart Full Of Missing Rishi Kapoor 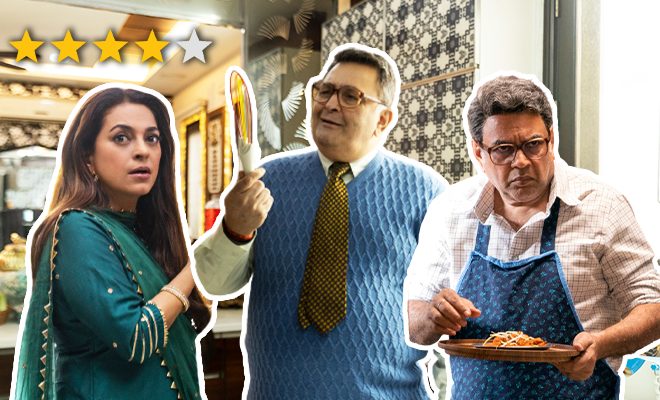 What happens when you’re cooking and suddenly run out of a key ingredient without which you couldn’t possibly make this dish? There have been times when filmmakers have been faced with dilemma when an actor passes away in the midst of shooting the film. And over the years, they’ve managed to find ways to either fill the void, ignore it completely or make real a part of the reel story to address this glaring void head-on. But what about the fans and the audience that watch the film? It was with this curiosity that I looked forward to watching Sharmaji Namkeen on Prime Video, the last film of legend Rishi Kapoor before he left us. His son, Ranbir Kapoor came forth to tell us how Paresh Rawal had graciously taken up the challenge to step into the role and complete the film. And I was eager to see, for this reason amongst several others, not the least being nostalgia, how this switch would work on screen.

And I am happy to report that Sharmaji Namkeen is wholesome, heartwarming, and does justice to its designation of being a swansong for the late Rishi Kapoor. The film is directed by  Hitesh Bhatia and produced by Excel Entertainment in association with Macguffin Pictures. Apart from Rishi Kapoor and Paresh Rawal, the movie stars Juhi Chawla, Suhail Nayyar, Taaruk Raina, Satish Kaushik, Sheeba Chaddha, Isha Talwar, Gufi Paintal and others.

Sharmaji Namkeen is, call it a bittersweet coincidence, a story about B.G. Sharma, a 58-year-old widower who loves his job of marketing for a home appliance brand but is forced to take VRS by his company. And so, like many grandparents, parents, or uncles we know from our own lives, Sharmaji takes to any and every pastime he can find to fill the void of 9 to 5 in his life. The man loves cooking, and is quite the Masterchef of his own family, always cooking for his two sons, who barely have time for him, and his extended family, even when they don’t take him too seriously.

But soon enough, thanks to his friend Chaddha, Sharma Senior finds a gig that he actually loves but has to hide from his family. He meets a bunch of middle-aged women who help him find a new calling with this delicious food and a new zest for life. Of course, lies, like laddoos, don’t last that long. What happens when his sons and his extended family find out about his culinary adventures makes the rest of the story.

Can I begin by saying, I LOVE Sharmaji as a character?

I know Ranbir Kapoor says this film was something his father really believed in. And I can see why. The lead character is so endearing! You can easily relate B.G. Sharma to retirees in your own family. Everything from the way he forwards WhatsApp messages and dozes off while watching TV, to maintaining a physical datebook for everything important… It reminded me of my grandfather, a dear uncle I know, even my own father who turns 60 this year and will probably never retire because he would hate to stop working.

But I think what I loved the most was this subtle and beautiful way that Sharmaji’s character incorporated traits of both genders, thereby creating a character who was in many ways, ahead of his time in thought and action. He was a single parent who juggled work and home. He cooked, and not just for the heck of it, but with the actual finesse of someone who loved it and didn’t see it as a gender-defined job that he had taken on as a hobby. He hung out with the ladies once he became comfortable with the setting. He even checked out his son’s girlfriend on Facebook but never once pestered him about it until his son was ready to tell him. And his home, heart, and kitchen were open to everyone, even those who might’ve mocked him.

Sharmaji Namkeen is heartwarming, funny, and has lots to say about parents and old age, without thankfully berating either generation for their choices

The writing sprinkles ample of desi family humour and relatable moments generously throughout the film, its flavour enhanced by Rishi Kapoor and Paresh Rawal’s impeccable comic timing. And the rest of the cast, Suhail Nayyar, Taaruk Raina as the astonished sons, Satish Kaushik as the BFF, and the ah-mazing kitty ladies Juhi Chawla (still a total heart stealer!) Sheeba Chaddha, Ayesha Raza Mishra, and more lend quite the helping hand.

The entire theatre cracked up during this one scene where one of Sharmaji’s friends shows him a clip of Amitabh Bachchan’s climax monologue in Baghban, and Rishi Kapoor as Sharmaji shut his friend down for it. The usual track that films involving ageing parents take often involves pitstops at the children-bashing station. Thankfully, Sharmaji Namkeen takes this with a pinch of salt and approaches it practically. Yes, Sharma Sr. is aware that his kids are too occupied with their personal lives and he is alone a lot. He is lonely too and misses his wife. But there are no sappy scenes or dialogues devoted to this and we’re saved the preaching.

The Sharma family is grounded in reality, and everything, from the house they live in to the relationships they share with each other feel lived in. I enjoyed the dynamic between the father and the sons, especially the elder one. It’s a nice role reversal with the son trying to discipline his father and the ageing father regressing to rebellion like a teenager, hiding things from his sons.

There are genuine lessons hidden in there about parenting, being a good child to your ageing parents, and the tribulations of retired life. But they’re never forced upon the viewer, which is the mark of a comedy with a message.

Also Read: Ranbir Kapoor Says He And Alia Bhatt Will Be Taking Their Wedding Vows Soon. Emphasis On ‘Soon’.

Paresh Rawal does what he does best. But it goes without saying, Rishi Kapoor steals the scene every single time

Paresh Rawal here is faced with a rather insurmountable challenge to fill in for Rishi Kapoor, and he does what he does best. It’s a trademark Paresh Rawal performance and of course, he has his moments. In fact, a huge shoutout to him for agreeing to do it, because it would’ve been sad to have missed this sweet story.

NGL, though, I had eyes only for Rishi Kapoor in this film, which perhaps is a good thing.

To address the elephant in the room, the transition between the two actors won’t impact your viewing experience, mostly because the film is very enjoyable and you’re sitting with a content smile on your face at all times. But my God, will it make you miss Rishi Kapoor! He is just so cute and huggable as Sharmaji, you can see why he instantly endears himself to everyone he meets!

The man was a certified heartthrob that my mother had a crush on in her youth and loved his dancing. I mean, he has always been adorable! There’s a scene in the film where this older Rishi as Sharmaji is shaking his booty and singing while he cooks, and it is so effing adorable! I’ve personally loved Rishi Kapoor in his father and grandfather wala roles post 2000, whether it is in Hum Tum, Do Dooni Chaar, Namastey London, Love Aaj Kal, 102 Not Out, Kapoor & Sons, or even Bewakoofiyaan. And that’s why, Sharmaji Namkeen felt like an apt swansong to both send him off, and heartbreakingly feel the void he leaves behind.

It’s a running joke in my family, where my mother wanted to take a VRS but my brother and I stopped her because we knew she could never enjoy the retired life without turning us crazy! If it’s mothers, they want to go around the house doing things; if it’s fathers, they want to assign those things to you or weigh in on everything about your life in a bid to still feel relevant. It gets more difficult for them when they don’t have a spouse for companionship to pass the long days that were previously occupied by a strict work routine. Now they have Facebook, which keeps them occupied, but it’s not for everyone. The film captures the struggle of retired people to want to be occupied and relevant so well.

Sharmaji Namkeen is a sweet, heartwarming film that makes for an apt swansong for Rishi Kapoor, a legend who loved his craft and still had a lot of acting left in him before he too was compelled to retire. Of course, you should watch it for Rishi Kapoor and lament the fact that he isn’t around to do more such films anymore. But irrespective, it is a film that you can watch with your family, especially your old man and old lady, as it will leave you with that wholesome feeling and a smile on your face.

Actually, a laugh too, because there’s a nice little surprise rolled out with the end credits! Ranbir Kapoor Says ‘Sharmaji Namkeen’ Is His Fondest Memory Of Father Rishi Kapoor, Thanks Paresh Rawal For Stepping In