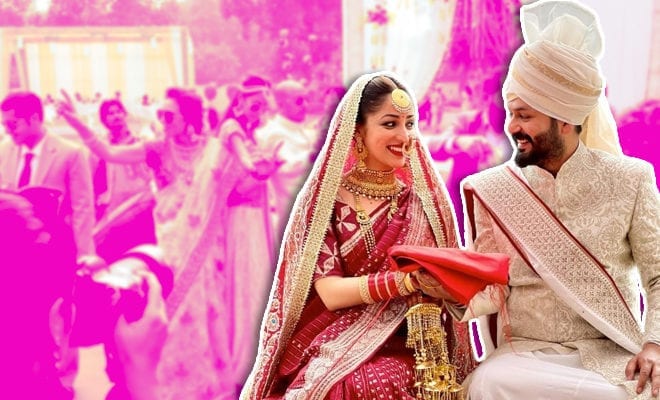 There’s a trend right now where actors/actresses and celebrities get married super quietly. Everyone knows the celeb tied the knot only after wedding pictures emerge and they quickly go viral. The latest one to tie the knot was Yami Gautam. She married the director of URI, Aditya Dhar in a quiet ceremony with only close friends and family in attendance. As photographs of the wedding made the rounds, several people commented on how simple but stunning Yami Gautam looked. Posts about how this simple wedding was winning hearts made the rounds. And I totally get it.

Yami Gautam looked resplendent in a red saree at her wedding. She was all smiles. It was later revealed that the saree Yami wore at the wedding was her mother’s. Yami even did her own makeup. There was so much to love about how tamasha less this wedding was. Nothing like the big Bollywood production other weddings in the fraternity have been. Yami announced her wedding by way of a post and mentioned how only close family members were at the ceremonies. As pictures from her chooda function and other ceremonies slowly make their way to social media, it got us thinking. It’s most important that the bride and groom get a wedding they truly want.

But is that reason to hate on big, fat Indian weddings? We certainly don’t think so. SSR’s death has polarised people and a lot of celebs have fallen from grace. The halo effect that celebs possessed has been tarnished a little bit. And so there is a sentiment of boycotting everything Bollywood. And mostly, the Hindi film industry is synonymous with extravagance. Perhaps that is why this why Yami Gautam’s wedding is being used as an example.

Yami Gautam had a quiet ceremony in the hills and that certainly has its charm but we love ourself a big Bollywood production. With nights spent practising dance steps with cousins and friends for the sangeet. The thrill of shopping for new outfits, figuring out the jewellery to go with it. Finding a pair of shoes that won’t kill you as you dance in the baraat, there is just so much fun to all this. And while the lovers of all things minimalistic might scoff at my little joys, there’s nothing wrong in loving a big,fat Indian wedding with gay abandon, even if Yami Gautam and a bunch of stars have decided to go the other way.