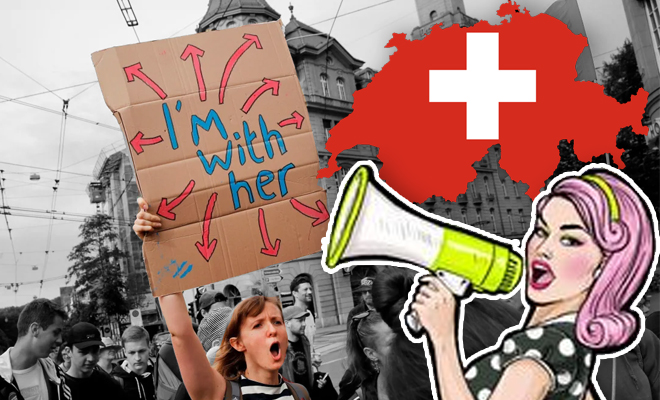 Women In Switzerland Screamed For A Whole Minute To Protest Against The Pay Gap And Domestic Abuse. Will They Be Heard?

Often, in cases of domestic or sexual abuse, one counter argument that comes up is “Why didn’t she scream for help?” Well, guess what, this time she has. And not because she is afraid, helpless or wants to be rescued. But because she is angry, outraged and wants to show solidarity with her fellow women over every time that they’ve been wronged. At this year’s Women’s Strike, an annual event organised in Switzerland to protest against the country’s shaky women’s rights, the women resorted to mass screaming to protest against domestic abuse and pay gap.

Surprising, isn’t it, that one of the richest countries in the world, with such high standards of living, would have such a murky secret underneath. But the workplace disparity and violence against women are not a secret. According to The Guardian, government data clearly indicates that women are earning less than men in similar roles, and the situation has only gotten worse.

Last year too, the Frauenstreike, (Women’s strike) saw roughly half a million protesters shun their domestic and professional responsibilities and take to the streets to protest for women’s rights to get the attention it deserves.

This year, the protest march took place on Sunday in Geneva and other Swiss cities, where the marchers in thousands raised slogans and protested against the abysmal women’s rights situation in the country. But that wasn’t the only cause. The protest was also intended to highlight the lack of recognition of basic LGBTQ+ rights as well as acknowledgement of unpaid work such as caregiving.

A flash mob was performed and a minute’s silence was also observed for women who were killed by their husbands or boyfriends in cases of domestic violence.

Also Read: Tara Kaushal, Author Of Why Men Rape Gives Us Bone-Chilling Insights Into The Minds Of Sexual Offenders

Despite the protest being a little low-key this year, owing to Coronavirus restrictions, the mass scream ensured that the protesters made their cause loud and clear. The mass scream began at precisely 3.24 pm. Why, you ask? Because this is exactly the time women’s work hours ideally would have to end considering they’re being paid less than their male coworkers. The scream lasted for an entire minute.

But the real question is, was it heard? Did it fall on the right ears? Reportedly, these Women’s Strikes are an annual occurrence in Switzerland since 1991. And yet, if women are still not being treated equally, acknowledged appropriately for their contribution to the country’s economy and welfare, and feeling unsafe, how many more minutes of screaming and how many more years of protests will it take for a change?

Protests for equality and better treatment seem to be raging around the world. While in India, there are voices being raised against the CAA-NRC implementation and the oppression of a certain section of the population, such as the Dalits, all of America is unanimously opposing the systematic racial discrimination of blacks with #BlackLivesMatter. If these worldwide protests are any indication, it is time to rewrite the book that society has been following when it comes to treating people discriminated against on the basis of their gender, skin colour, place of origin, economic status and religion.

Also Read: Why Is Men Cooking A Celebration But An Expectation From Women?