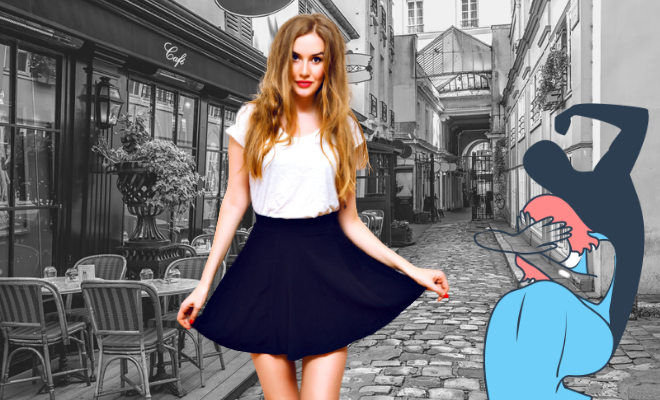 22-Year-Old Woman In France Beaten By Three Men For Wearing A Skirt. What The F**K Is Wrong With People?

Back in the year 1992, a study by the name ‘Dress and identity’ was published by two accomplished dress scholars Mary Ellen Roach and Joanne Eicher, who claimed that the way we choose to dress ultimately sends out nonverbal social signals to people, giving them a hint about who we are. From how much power we wield in the society, to what influences us, our clothes are often regarded as an extension of our own personality. But what that study missed pointing out was that while our choice of clothes reflects a part of us, how people see it, reflects their mentality, and for women that usually comes at a cost of being called a slut. Or in a 22-year-old student’s case from France, it came at the cost of her being beaten down by three men.

Reportedly, identified as Elisabeth, this 22-year-old student in France was recently assaulted by three men and beaten down on the road, in the middle of the day, all because they found her wearing a skirt. Outraged upon hearing of such intolerance and absurdity, when we read more about the incident, we found that not only did the three men call the woman a ‘whore’ as she walked by, but so offended were they by her skirt, that they ran up to punch her right in her face.

The incident took place in the eastern city of Strasbourg on Friday afternoon, as told by Elisabeth to the France Bleu Alsace radio. She narrated how, when she was walking back home, she heard one men exclaim, “Look at that whore in a skirt.” Soon after, two of the men held her, while one hit her in the eye so hard it turned black. As the men fled the scene, Elisabeth lay there with a bruised face, wondering what she had done to call this upon herself. The answer? Nothing.

-Attacked myself on a street years ago for naked upper body, some cultures are just damn stupid and dangerous to all societies.

Also Read : A Woman In Paris Was Denied Entry To A Museum For Wearing A Dress With A Plunging Neckline. Because Having A Cleavage Makes It Hard To Appreciate Art?

Taking to Twitter to talk about the horrible incident, Elisabeth put up a picture of her beaten up face, which enraged the netizens to a point where they felt compelled to ask if women’s safety was ever going to be achieved. The matter that was taken rather seriously, invited a statement from the government spokesperson Gabriel Attal, who said, “In France we must be able to go out dressed in the street as we want. We cannot accept that today in France, a woman feels in danger, either harassed, threatened or beaten because of how she dresses.”

Outcry in France after woman says she was assaulted for wearing skirt https://t.co/ozNKVJuBML

And that is what really needs to be addressed. Everything women do is somehow always taken offence to personally by everyone. And this case was no different. Whatever had been the reason behind the woman choosing to wear a skirt, or if tomorrow she choses to wear nothing at all, absolutely nothing gives anyone the right to feel offended and, in turn, attack the woman.

The fact that every day, more and more men, and even women in most cases, feel entitled to control the way women conduct themselves is what’s more problematic here. People need to imbibe in their minds the fact that women are capable of making their own choices and do not need anyone’s approval to live their life. Most of all, to dress in any way while they do that. It is our choice and ours is the only one that matters.

Also Read : Germany Makes ‘Upskirting’ A Punishable Crime With A Sentence Of Upto 2 Years In Jail. We’re Glad Someone Is Taking This Seriously