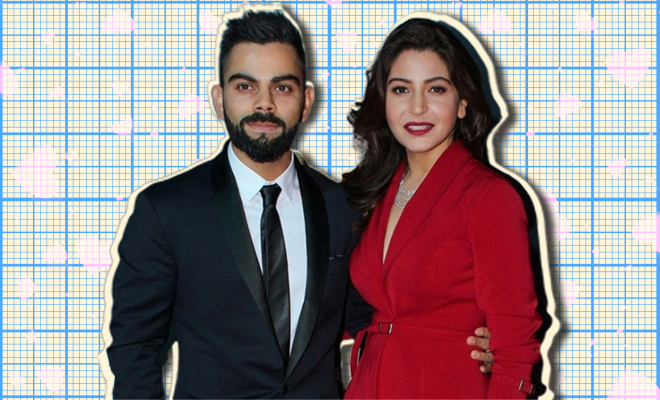 Virat Kohli Said He Was Nervous And Cracked Lame Jokes When He Met Anushka Sharma For The First Time. He’s Every Indian Guy Ever!

You’d like to believe that there is a world of difference between the celebrities we see on the big screen and us mango people. After all, the lifestyle, the social circles, all that bling, it does account for something right? Except, we may be wrong here especially after learning just how similar and relatable our favourite celebrity couple is when it comes to all things love.

It doesn’t matter if you’re an ace actress like Anushka Sharma or an incredible cricketer like Virat Kohli, first dates seem to bring out the most nerves in you and these two are a proof! During a very candid conversation with sports reporter Graham Bensinger, Virat Kohli opened up about the initial phase of his relationship with then girlfriend, now wife Anushka Sharma and talked about the first time ever that they met.

He shared how they met for the first time during the shoot of a shampoo commercial and the moment he learned about shooting alongside of Anushka Sharma, he became so nervous, he cracked some pretty lame jokes in front of the actress. Bascially every Indian guy ever, because as we know, Indian men have no game. For someone who the entire nation bowled over, it took one confident Anushka Sharma to rattle his nerves.

Where as Anushka on the other hand, upon finding out that she had to co-star with Virat in the commercial was advised not to wear high heels for he didn’t have the height. But even with her short heels, she ended up coming across as taller than him. Virat shared, “She walked in [wearing small heels] and she was looking taller than me and I was like ‘Didn’t you get a higher pair of heels?'” And honestly, it’s too cute to be true for us.

To realise that one of the most accomplished couples in the industry has similar nerves and possibly clammy palms when it comes to their first interaction is more than comforting and relatable. Setting new kinds of couple goals and first date goals for us, the two continue to share a strong bond by supporting each other through their highs and lows and would be seen completing two years of marriage in December 2019.