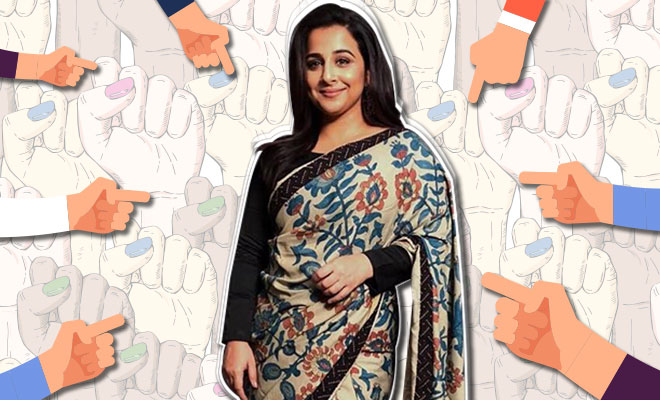 Vidya Balan Exposes The Dark Side Of Bollywood, Shares Her Horrifying Experience With The Casting Couch

There are thousands of people who come to Mumbai with the dream of making it big in Bollywood one day. In an industry like Bollywood, being an outsider is difficult but actors like Shah Rukh Khan, Rajkumar Rao, Akshay Kumar, Ayushmann Khurrana, Kangana Ranaut, Vidya Balan are proof that hard work and a little luck could actually take you places. Apart from the fame and luxury that accompanies being a star, there’s always an untold side of the industry, which most actors avoid talking about. Actress Vidya Balan, who has carved a niche for herself, isn’t the kind of mince words or to sugarcoat her experiences. She was talking about her journey to becoming who she is today, Vidya Balan threw light on the subject of casting couch and how she dodged the horrifying experience.

Vidya Balan has opened up about body shaming and the times where she had to face multiple rejections for three years. Today Vidya Balan is one of the best performers we have, but recently in an interview with Pinkvilla the actress shared her struggles and also the time when a director tried to trick her!

Sharing one of her most traumatic incidents, Vidya Balan revealed, “One day I remember I was in Chennai and this director came to meet me. I said let’s sit in the coffee shop and he kept insisting that he wants to talk to me and that we should go to the room. I left the door of my room open and he left within five minutes. This incident suddenly struck me today when I’m talking about this.”

Vidya Balan also opened up on the things that were been written about her fashion, body and so much else. Something that Vidya isn’t bothered too much by, today. Vidya calls those times horrifying and scary and said, “Someone wrote that ‘Dress like this, she has no business of getting out, she should stay indoors’. That had affected me so much that for the longest time, I would get dreams of it and get really angry. Today, I don’t let the noise get to me.”

Also read: Vidya Balan Shares How She Didn’t Like Kabir Singh Getting The Girl In The End. Thank You For Being Honest!

Well, we’re so happy that Vidya Balan is living her best life and has overcome her past. The talented actress is a huge inspiration today and we can’t wait to see what’s next in store for Vidya. Meanwhile, after the monstrous success of Mission Mangal, Vidya Balan will be seen in the Shakuntala Devi Biopic!

Sonakshi Sinha Says Shah Rukh Khan Is The Most Chivalrous Man. We Want To Get Dropped To Our Car!