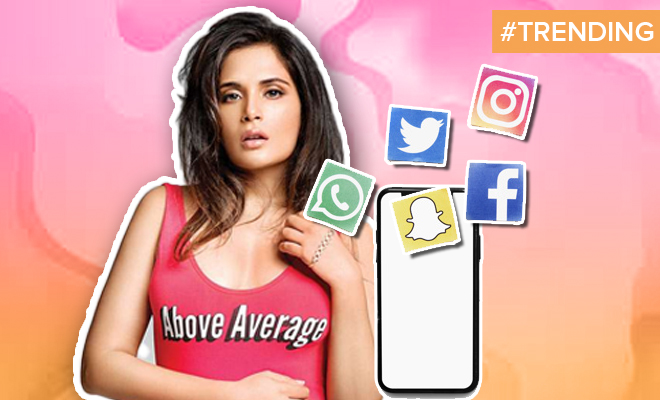 #Trending: Richa Chadha Talks About How Social Media Takes Up Too Much Time And We Can Completely Relate

These first 6 months of 2020 have been tainted with illness, death, natural disasters and other socio-economic problems. We are living (more like merely existing) under constant fear. I read a meme the other day that say that someone needs to reboot this year because it’s got a virus. I laughed so much, it’s funny because it’s true. That’s what we are all doing, isn’t it? Just mindlessly scrolling through social media laughing at memes and entertaining ourselves by reading about the latest twitter feud. The best is that even though you know it’s not productive, you just can’t seem to stop.

Talking about this phenomenon, Richa Chadda said in a recent interview that she made her social media account private to minimize engagements. She said, “I realised I spent nine hours in a week on the platform. I have several things to complete and I can’t meet any deadlines with this waste of life on social media. I haven’t vacated my space, but just made the account private to limit engagement, because I have to finish a book I started writing.”

That is super relatable. I would spend 5 hours a day on Instagram myself, just scrolling and stalking. It was fun for a while, but it starts to get old. I totally understand how social media must be hampering Richa’s work though, it’s such a distraction for us all.

Although, in the last few months I have noticed a change in social media. People are more confrontational and just lurking about waiting for someone to say or post something wrong or politically incorrect so they can pounce. If you have been on Twitter recently, you will know that every day on Twitter is a bloodbath for someone. Not to mention, celebrities are getting incessantly trolled all the time and with no good reason. The whole social media atmosphere has changed and become extremely negative and harsh.

Talking about how social media and its trolling culture affects her, Richa said, “It’s a medley and battle of bits, bytes and bots based on algorithms and can’t replace human interaction”. She further adds, “The platform is toxic because the world has become toxic. People take advantage of anonymity to find relevance and vent. This is the behaviour of cowards and mustn’t be taken seriously.”

Also Read: Richa Chadha Revealed How Ali Fazal Proposed To Her And It Shows Their Relationship Is A Perfect Mix Of Romance And Comfort

I can’t agree with her more. Social media has become toxic because right now, there are so many horrible things happening in the world and all at once. The more people are getting bored and frustrated with sitting at home, the more they are making use of the anonymity social media offers and taking it out online. However, we are glad that all the negativity online does not affect Richa.

Okay, enough about the darker side to social media. There is a good one too. The side that connects people and makes us laugh. Talking about that Richa says, “It works both ways. As an artist, you are pleasantly surprised to find fans in Norway and Turkey, thanks to social media. You may not get to know how loved you are either, if you aren’t online, in certain cases. I love social media, but like everything else in life, it has its demons.”

Sometimes, you just have to retreat from spending too much time online. But whatever the case may be, we all love social media platforms as much as we want to hate them.

Richa Chadha Has Apologised For Her Joke About Bipolar Disorder. We Need More People Like Her